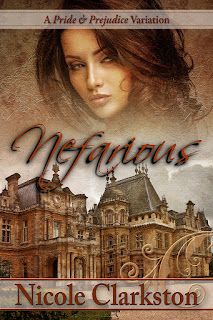 Nicole Clarkston, author of the recently released and #1 Best Seller, Nefarious, is stopping by and sharing a vignette! You are going to love it! The scene is from Elizabeth's point of view instead of Darcy's. Since the book is written from Darcy's point of view, it is fun to get Lizzy's thoughts in this vignette. But first, let's talk a bit about the book and the blurb.

Have you read Nefarious yet? Did you follow along when Nicole was posting the first few chapters at Austen Variations? I did, and I couldn't wait for the next one. Everything about this book is fantastic - from the way it was conceived to the way it concluded, and everything in between! What a great read, and it is getting rave reviews! If you haven't read it, I hope you get to soon. It is not to be missed.

He hates everything about her.
She despises him even more.
So why is his heart so determined to belong to her?

Once trapped by marriage to a woman he loathed, Fitzwilliam Darcy is finally free again. Resentful, bewildered, and angry, he is eager to begin his life over—preferably with a woman who is the exact opposite of his wife.

He never imagined a short stay in Hertfordshire would bring him face to face with his worst nightmare; a woman similar in face, form, and name. He certainly never expected her to be so impossible to ignore.

Torn between what he believes he wants and what his heart cannot live without, his dignity begins to unravel. Will his desperation to escape his past drive a wedge into his closest friendship and destroy any hope of a future?

Will Miss Elizabeth Bennet prove to be as nefarious as his wife? Or, will the last woman in the world be his only chance at happiness?

“Men know that women are an overmatch for them, and therefore they choose the weakest or the most ignorant. If they did not think so, they never could be afraid of women knowing as much as themselves.” 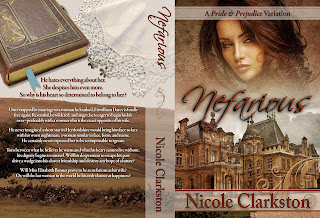 At this point, it certainly doesn't seem like Lizzy and Darcy will ever have a chance at a HEA. I'm so glad there is the rest of the story! :) (and what a story it is, too!)

Now it's giveaway time, and Nicole has a great giveaway for one lucky reader!

Thank you, Nicole Clarkston, for stopping by and letting us read Lizzy's thoughts. She was an impertinent mess!

Thank you also for the generous giveaway for my readers. Best wishes with your new release, Nefarious.
Posted by Janet T at 12:50 AM