L.L. Diamond has a new release due out in two days, Particular Attachments, and she is stopping by today to tell us a little about it. I'm excited to have her visit, having been some time since her last visit. Thank you, Ms. Diamond, for sharing your excitement about Georgiana and Nathaniel's story. I know all my readers are as anxious as I am to learn more so I will turn it over to you. Wecome! (Your book cover is beautiful!)

Thanks so much for hosting me on this blog tour! I’m so excited to finally release Particular Attachments and tell everyone Georgiana and Nathaniel’s story. I knew Georgiana from Particular Intentions, but getting to know Nathaniel while writing this book was a lot of fun. I can’t wait for everyone to see what a great character he is!

I was very fortunate when Georgiana and Nathaniel told me their story for Particular Attachments. If you read the interview with Georgiana, she was a little reticent about answering my questions, but Lord Sele was not nearly so timid.

LLD: I suppose I ought to start by having you introduce yourself to our readers.

Lord Sele: I would be pleased to do so. My full name is Nathaniel George Henry Howard, Viscount Sele.

LLD: How long have you known Georgiana Darcy?

Lord Sele: My parents were great friends of the late George and Ann Darcy, so I suppose you could say I have known her since she was in her cradle—not that I recall such a time. I have simply known her for as long as I can remember.

LLD: Were the two of you friends as children?

Lord Sele: (Chuckles) My answer to your question would be no. I wished to be friends with her, but she was oft times difficult. She played with her doll and her reticule and ignored me frequently, which is why I attempted to gain her notice.

LLD: Somehow, I doubt you wished to be kicked in the shin.

Lord Sele: No, I admit that I never intended for that manner of notice, yet I did naught but arrive at Pemberley that day.

LLD: You must admit that you did more than simply arrive at Pemberley.

Lord Sele: I may have insisted she would marry me. She always used to put on airs and behave quite imperiously. I enjoyed raising her ire when she behaved in such a manner.

LLD: You still enjoy raising her ire, do you not?

Lord Sele: I believe you confuse us with Darcy and his wife. They take great enjoyment in bickering much like my parents. I do enjoy teasing Georgiana—as long as she does not find humour at my expense with my mother. They enjoy themselves far too much.

LLD: You mean to say you can tease her, but she can’t tease you?
Lord Sele: I do not object to her teasing. It is just that she and my mother enjoy making a laugh at my expense their sole occupation when together.

LLD: Do you still wish to marry her?

Lord Sele: I have never desired another for my wife, and I never will. I cannot explain why, but I have craved her notice and her attention for as long as I can remember. I am afraid that in my quest to gain her society, I behaved in a less than gallant fashion when I was in my youth. I fear she remembers those instances more than the last time we met.

LLD: But you were young, weren’t you?

Lord Sele: I was twelve and she was eight when she kicked me in the shin.

LLD: You know, after hearing the story, I’m not certain I blame her for kicking you.

Lord Sele: I must disagree with you. I did naught to deserve it on that occasion, though I am certain my behaviour on other occasions merited my punishment so I do not hold the offence against her.

LLD: You have lived in Ireland for the last few years?

Lord Sele: I moved to an estate that is part of the Lindsey estate after I graduated Oxford. I remained most of the year, returning only for my mother’s birthday and Christmas each year. Of course, I also journeyed home when my father became exceedingly ill. We are fortunate he survived.

LLD: Did you return to England only to see your parents?

Lord Sele: I knew Georgiana would be nearing the age of her coming out. I returned to spend the Christmas season with my parents, but I remained long enough to discover whether Georgiana would have her début. When I learnt she remained at Pemberley, I returned to Ireland to continue overseeing the mining there.

LLD: What did you think when you first laid eyes upon Georgiana after all these years?

Lord Sele: I recognised her instantly. She has changed of course—matured. She was lovely when last I saw her at fourteen, but she has become a stunning woman.

LLD: When you first spoke, was she pleased to see you?

Lord Sele: While I would have wished her to throw her arms about my neck and pledge her undying love, she was particularly reticent in my company.

LLD: She called your manner of courtship dogged persistence when I interviewed her. Would you agree?

Lord Sele: One could call her resistance to my overtures a dogged reluctance then. (Shakes his head) She was so determined she would never marry. I knew she could be a wilful woman, but I never imagined . . . well, I suppose your readers shall see.

LLD: What do you love most about Georgiana?

Lord Sele: Her loyalty to those she loves is her most attractive quality. She has a gentle and forgiving heart as well. It is her heart that mine attached itself to when we were but children and it is her heart that will be bound to mine forever. I cannot change that fact, and I would never wish to.

I think that’s a great place to end things. Thank you, Lord Sele, for taking the time to speak with me about your life and Georgiana! Thanks again to Janet for hosting us!

Blurb: She swore would never marry!

Georgiana Darcy is a lady with a secret! The last thing she wants is to return to London, but what else can she do when her brother and his wife make plans to spend the Christmas season in town. When Lizzy’s youngest sister, Lydia, joins them, Georgiana gains a confidante, but will Lydia’s outgoing nature cause problems when Lord Sele, son of a family friend reappears in Georgiana’s life?

As an insufferable boy, Lord Sele vowed he would marry Georgiana, but was his return from Ireland a coincidence or was his sole purpose to pursue her? He admits to desiring friendship, but Lydia is determined his desire is Georgiana and she will stop at nothing to see her best friend happily settled.

What is Georgiana to do when faced with the society she has managed to avoid for her entire adult life as well as the one man determined to change her mind about marriage? Will she be able to overcome her fears despite the spectre from the past that seems to be haunting her? Will she be forced to tell her secret and choose happiness or will someone from her past ruin everything? 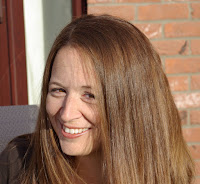 L.L. Diamond is more commonly known as Leslie to her friends and Mom to her three kids. A native of Louisiana, she spent the majority of her life living within an hour of New Orleans before following her husband all over as a military wife. Louisiana, Mississippi, California, Texas, New Mexico, Nebraska, and now England have all been called home along the way.

After watching Sense and Sensibility with her mother, Leslie became a fan of Jane Austen, reading her collected works over the next few years. Pride and Prejudice stood out as a favourite and has dominated her writing since finding Jane Austen Fan Fiction.

Aside from mother and writer, Leslie considers herself a perpetual student. She has degrees in biology and studio art, but will devour any subject of interest simply for the knowledge. Her most recent endeavours have included certifications to coach swimming as well as a fitness instructor. As an artist, her concentration is in graphic design, but watercolour is her medium of choice with one of her watercolours featured on the cover of her second book, A Matter of Chance. She is also a member of the Jane Austen Society of North America. Leslie also plays flute and piano, but much like Elizabeth Bennet, she is always in need of practice!

Leslie’s books include: Rain and Retribution, A Matter of Chance, An Unwavering Trust, The Earl’s Conquest, Particular Intentions, and Particular Attachments. 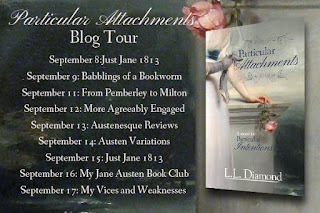 Oh, Ms. Diamond, I did love reading your interview with Nathaniel. It was my pleasure to host the two of you. If any of you, Dear Readers, have not read the interview with Georgiana, stop by Ceri's at Babblings of a Bookworm and enjoy. You'll be glad you did! How fun to have their interviews where we can enjoy the thoughts and insights of each character. I love it! Thank you!

I'm so glad you stopped by on your busy blog tour. I wish you the best with this new release and look forward to adding it to my library. I have enjoyed all your books and am confident I will love this one too.

Good news, Readers! There is a giveaway! Leave us a comment and one of you can win an eBook copy of Particular Attachments! The giveaway is international and ends on the 17th of September at 11:59 P. M. Good luck to all and don't forget to visit all the stops of the tour for Particular Attachments! Best Wishes, L. L. Diamond, and please visit again soon.
Posted by Janet T at 9:55 AM