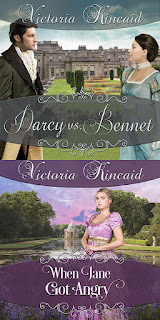 Welcome, Victoria Kincaid. It is always good to have you stop by. Your new audiobooks, with the ever popular narration of Stevie Zimmerman, are sure to be wonderful listening. Congratulations!

Thank you for stopping by my blog and offering an excerpt and double giveaway! That is awesome! I know my readers will be as excited as I am! The excerpt is, well, I'll use Elizabeth's words, "thrilling!" It almost took my breath away in places! Imagine listening to those words as an audiobook!

Hello Janet and thank you for having me as a guest.  I was lucky that Stevie Zimmerman recently agreed to narrate two of my books, Darcy vs. Bennet and When Jane Got Angry.  She does a great job with the Pride and Prejudice voices and my readers always love her narration.  Below is an excerpt from Darcy vs. Bennet and information about how to enter a double giveaway for copies of book audiobooks!

Elizabeth dearly loved to dance but seldom had she found a partner as accomplished as William.  They moved so well together that it was as if they had been dancing together for years.  Already she regretted that they would not share another set.  But she had sufficiently indulged her whims; she and Louisa would need to leave soon.  What would Jane think if she knew Elizabeth had kept company with a masked man—without any sort of proper introduction?  Elizabeth herself was a bit startled at her own temerity.
She had planned to observe Louisa from the shadows and avoid the other guests.  But then Louisa had abandoned her, and William had appeared as if heaven sent. He had intrigued her at once.  His clothes were almost all black—a common choice for men at a masquerade—and of the highest quality; they displayed his tall figure to great advantage.  What she could see of his face suggested he was quite handsome.  He was gentlemanly and solicitous in his manners.  But what most struck Elizabeth was that the conversation between them flowed so effortlessly; it was as if they had known each other for years rather than minutes.
She had resolved many times to quit his presence but found herself instead agreeing with his every suggestion.  When he had left her to speak with that other woman, she had felt a ridiculous twinge of jealousy—and accompanying relief when he revealed her identity.  But even in the grip of such a turmoil of emotions, Elizabeth had eagerly awaited his return rather than take the opportunity to escape.
And now they were dancing.  Each touch of his hand thrilled her upon contact—like a special gift reserved for her alone.  Every touch felt so illicit, so naked; Elizabeth actually checked to ensure they were both wearing gloves.  Although she knew it was wrong, she yearned for more contact with him—to touch his arms, his back, his face.  Shivers traveled up and down her spine.  She had danced with many men; why did this one affect her so?
Other women in the set were throwing William flirtatious glances, but he ignored them.  Undoubtedly, they knew his identity.  The quality of his clothes suggested his family had at least a moderate fortune, which was bound to attract feminine attention.  Why does he pay me any attention at all?  He is too high in the instep for me.  Sharply she reminded herself it did not matter.  There was no harm in enjoying his company for this one night, and she would never see him again.
The dance called for them to clasp hands and turn in a circle.  His eyes caught and held her gaze as they turned.  Despite his mask, she could discern he was a handsome man with a fine figure.  But there was something else that stirred inside Elizabeth when she lost herself in his dark blue gaze—almost as if she were coming home to someone she had known all her life.
Then she gave a little shake of the head.  Stop this foolishness! she admonished herself.  The warm air, the torchlight, and the scent of roses are simply casting a spell—enchanting my senses and encouraging flights of fancy.  At the conclusion of the dance, she would thank him, and they would go their separate ways.  It was well past time for Elizabeth and Louisa to depart.  The longer they remained, the greater the risk of detection.
Elizabeth ignored the pain in her chest.  She could not possibly miss a man she had known for less than an hour.  This was not a fairy tale or a popular novel.
He had simply sought her temporary companionship.  Perhaps he was more handsome and charming than most…well, any other man she had met.  But no doubt he would forget her the moment they parted ways.  And she would forget him as well…eventually.
The dance brought them very close for a moment, face to face, and he smiled at her, creating a tingle of excitement that spread into the very core of her body.  The sensation was both exhilarating and frightening.  Would she—could she—ever have these feelings for another man? 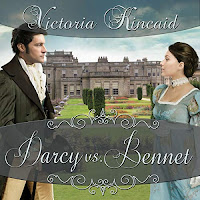 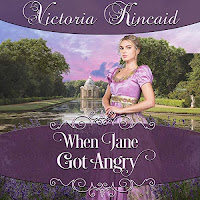 Did you enjoy the excerpt? Did the mask make it easier to talk to Elizabeth? What do you think? Have you read this book? I think it would be lovely to listen to the audiobook. How many of you enjoy listening to audiobooks? Victoria Kincaid is giving away two audiobooks. There will be two lucky winners. The winner can pick which audiobook of the two he/she would like to have. The audiobooks in the giveaway are Darcy vs. Bennet and When Jane Got Angry. Leave a comment to be entered. The giveaway will end on the 10th of September at midnight.

Thank you Victoria Kincaid for visiting and sharing an excerpt with us. We appreciate your generous giveaway too, and we wish you the best with your audiobooks.
Posted by Janet T at 7:54 AM