Jayne Bamber...Strong Objections to the Lady 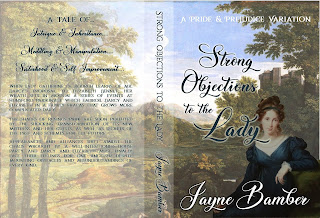 Happy 2020 to everyone! I hope all of you had good, memorable holidays, and I wish you a healthy and wonderful new year!

My first guest of 2020 is one I have enjoyed having visit in the past, the lovely Jayne Bamber. Jayne is back sharing an excerpt and giveaway from her new release, Strong Objections to the Lady. You are going to love this excerpt! I certainly did. It has mystery and romance! Delightful!

Hello! It’s great to be back at More Agreeably Engaged! My newest book, Strong Objections to the Lady is out now, and I’m here today to share another excerpt with you. This variation brings us to a unique new setting, when Anne de Bourgh inherits a castle (and Rosings too!) Humphrey Hall is part medieval castle, part modern structure, where Anne and her friends get up to nocturnal hijinks…. 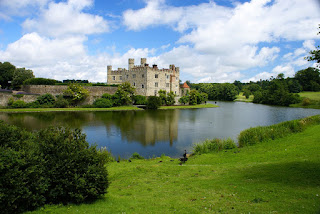 I hope you enjoyed this excerpt! I will be sharing more excerpts throughout my blog tour, and there is an e-book giveaway. You can enter by clicking here. You can also follow me on Facebook and my new blog [Link to blog] for more updates! 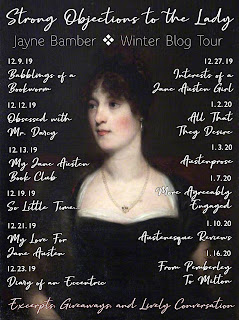 Jayne, I don't know about the readers, but I certainly enjoyed the excerpt. Wow! I felt I was right there with Jane, Anne, and Elizabeth! The sparks between Darcy and Lizzy were magnificent! This is definitely on my TBR list! Thanks so much for stopping by this morning and sharing with us. From looking at Amazon, it seems your book is doing great! Congratulations! I wish you the best!

Now for the giveaway, it is for an eBook of Strong Objections to the Lady. There is a Rafflecopter as Jayne already mentioned. Be sure to click on the link above or you may click here. Good luck to all and thanks for stopping by! Thank you, Jayne for visiting my blog and for including my readers in your giveaway!

If you missed any stops on the blog tour, you still can stop by.
Posted by Janet T at 10:00 AM 43 comments: