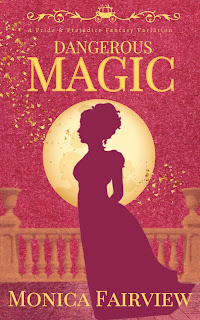 It's such a pleasure to welcome Monica Fairview back to More Agreeably Engaged. Monica has a new book with a little magic! The title, Dangerous Magic, is intriguing without knowing anything else about the book. Then there is the cover. Take a look at it to the right. Isn't it pretty. I love the two colors. It lends the look of magic to the cover and also draws us in. Besides the title and cover to get our curiosity going, we are in for a treat because Monica is sharing the back cover copy and an excerpt! Not only that, but Ms. Fairview is giving away one eBook to a lucky reader. More on the giveaway later. For now, let's read what is on the back cover.

A sparkling tale of Regency England, a forced marriage, and two magicians who must work together to save the Kingdom.

Elizabeth Bennet is stunned when the Royal Mages come to her peaceful country home of Longbourn to take her away. She is even more bewildered when she is commanded to marry a powerful mage by the name of Fitzwilliam Darcy. She has always dreamed of marrying for love, and an arranged marriage with an arrogant stranger was never part of her plans.

Join the author of ‘Fortune and Felicity’ in this Jane Austen Fantasy Variation, an enchanting story of determination, love, and hope against all odds.

Darcy paced up and down in his practice hall, for once unable to keep his mind on his training. He was not a member of the Council, but he had expected to be invited to Elizabeth Bennet’s assessment. However, they had refused to allow him to be part of it, on the grounds that he might influence the proceedings. He had never heard anything more ridiculous. Why would he want to do such a thing? He did not particularly like the idea of marrying her, true, but he was hardly going to stand in the way of the only candidate who might be able to help him win the war.

Or did they think he would try to influence the proceedings in her favor? That he might find a way to help her? He would never do that, either. There was no point appointing a Janus Mage who could not live up to their expectations.

The ways of the Council were often mysterious to him. It would all be a great deal easier if Lord Matlock would not be so tight-lipped about the whole business. After all, Darcy was the one who had to live with their decision. He ought to have a say about whether she was suitable or not. Instead, he was forced to wait it out.

He hoped his uncle would remember to inform him of the outcome, and that Darcy would not be forced to go to the Council Chamber himself to find out the verdict.

He was on the verge of doing that very thing when there was a knock at the door and his uncle appeared.

“Well?” said Darcy, dreading the answer, one way or the other.

Matlock smiled and clapped him on the shoulder. “The results are impressive, Darcy. Very impressive. She has all the qualities we require. She is able to stay calm even in the most adverse situation, her magic is powerful, and she is creative.”

Darcy let out the breath he was holding. “Thank heavens. We can finally get on with it.”

Then he registered something in his uncle’s words. “Did you say ‘creative’? What does that mean, exactly?” It was not a characteristic that people normally associated with mages.

His uncle smiled. “I am sure you will discover what I mean very soon. Meanwhile, you can be easy. We have found you a Twin, and I think you will be satisfied. Though I have the feeling that you will not be as pleased about it as I am.”

“I wish you would speak plainly for once, Uncle, instead of always speaking in riddles,” said Darcy. “Will she do or will she not?”

“If that is all you wish to know,” said Lord Matlock. “Then I will answer plainly. Yes, Darcy, Miss Bennet will do.”

Darcy nodded. “Good. Then the wedding will take place as planned.”

“Yes.” Lord Matlock turned to leave. As he walked out of the door, Darcy thought he heard his uncle say, “and heaven help you, my boy.”

But when he called out for the earl to explain himself, Darcy did not receive an answer.

Are you ready to read more about Dangerous Magic? 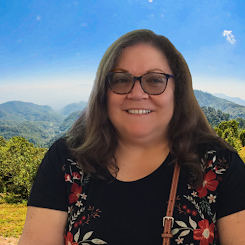 Monica Fairview writes Jane Austen sequels and variations as well as Regencies. Her latest novel is a Pride and Prejudice fantasy variation, Dangerous Magic. Her biggest claim to fame is living in Elizabeth Gaskell’s house in Manchester, long before the house was restored. After studying in the USA, she taught literature, then became an acupuncturist. She now lives near London.

Monica loves anything to do with the nineteenth century, and obsessively follows every period drama she can find. Some of her favorites are ‘North and South’, ‘Bright Star’ and ‘War and Peace’, and a dozen others that she couldn’t possibly list here. Of course, she has watched Pride and Prejudice (1995 and 2005) more times than she could count on her hands and toes.

Monica enjoys reading fantasy and post-apocalyptic novels but avoids zombies like the plague. She loves to laugh, drink tea, and visit National Trust historic properties [those were the days!], and she is convinced that her two cats can understand everything she says.

As I already mentioned, there is one eBook being given away by Monica Fairview. The giveaway is international. Leave a comment below to enter the giveaway. Be sure I have a way to contact you. The giveaway will end at midnight on the 23rd of March. Good luck everyone!

Now tell us what you thought about the excerpt? Did you like it? What about some of the others that you have read? I'm fascinated with what I've read so far. The line that Lord Matlock uttered in the next to last paragraph above hooked me. The entire excerpt had me wanting to read more, so I purchased the eBook! Have any of you read it yet? I hope to soon.

Thanks for stopping by, Monica. I appreciate you including my blog your tour. I wish the best with this release. It looks like it is already doing quite well! Congratulations!