Hello, Dear Readers. I hope you are all well and safe. It has been quite a few weeks since I have posted, so I am happy to be here today. 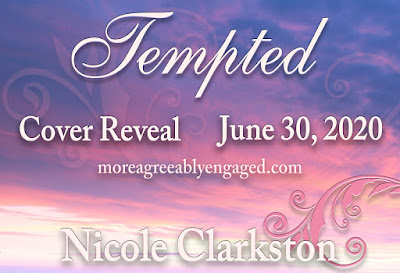 My special guest, Nicole Clarkston, chose More Agreeably Engaged to share the cover reveal for her new release, Tempted. Oh my, you are going to love the book! We both hope you will love the cover too. Before we get to the cover, here's Nicole to tell you a little about her story.

Tempted is a book that truly frightened me. I have confessed this before, and there are SO many reasons why, but today I will be sharing one of them: Elizabeth is no country squire’s daughter. She’s not even gently brought up.

To explain a little more about her, first I will touch on the back story of Tempted. The time, as you have noticed, is moved up about 90 years. That timeline gave me several new opportunities, and I don’t even have time to list all the historical details I tried to take advantage of, but one of them is the Boer War. The British Empire fought the Boers, or otherwise known as Dutch Afrikaners, to gain control of the region for trade. That is the ugliest and simplest version of the history possible, and, as we all know, the real history is much bigger and more kaleidoscopic than that. However, as a side effect of the war, the British Army was in constant need of horses for the cavalry. Horse buyers went to Australia and the United States trying to buy up as many remounts as they could, a venture financed in some part by British investors.

That is where Colonel Fitzwilliam comes in. Some of these horse buying stations were in Wyoming, and I created a fictional town around one for my purposes. This humble little cow town, the focus of the British Cavalry’s interests, is where our Elizabeth hails from. The Bennet family’s ranch has failed and been sold, and now Mr Bennet works with the Army.

Circumstances conspire to thrust Elizabeth from her home and into Darcy’s world, but she is still very much a wild child. She does not sit still well. She does not understand why titles and influence are so gosh darn important. And she has no clue how a “lady” is supposed to act in “quality” drawing-rooms.

Oh, and she really doesn’t understand why she finds this Darcy character so… um… fascinating.

That is not to say that our Elizabeth is irreverent and obstreperous. Well, not most of the time. Okay, once in a while she is respectful and modest. It’s just that her ideas of how things should work don’t really fit in this new world, and she’s just stubborn enough that she doesn’t mind saying so.

I do hope you enjoy Tempted! Here is one of the excerpts that had me so terrified!

From what Nicole said, what do you think about this Lizzy? It's interesting that she hails from the United States and is not a gentleman's daughter. Hmmm, I wonder what that can mean for Darcy when they eventually meet, but wait, I'm getting ahead of myself. Let's read the blurb and see if more information is brought to light.

Running from her past, Stumbling into the unknown,
and Drawn to a future she cannot have.

Elizabeth Bennet left all she loved behind when she accepted Colonel Fitzwilliam's hand.
Dragging her sister Jane, her cousin Billy Collins, and a horrible secret along with her, she leaves her home and family in the United States and sets sail for England..., and safety. Expecting to meet her new husband when he returns from the Boer front, she is shocked to learn that not only does his family not believe her, but Richard has gone missing.

Fitzwilliam Darcy is only doing his duty. Trying to learn the truth of what happened to his
cousin, while sheltering the woman who claims to be Richard Fitzwilliam's wife, he encounters
more than he bargained for. She is ill prepared for life in this world, and her independent ways
threaten to defeat her before she has even begun. Unfortunately, she is close to defeating him,
as well. Pledged to marry another, but honour-bound to do all he can for Fitzwilliam's wife,
his equanimity and fortitude are tested whenever she is near.

When news of Fitzwilliam finally comes, it brings both grief and complications. Surprises,
possibilities, and agonising choices... Will Darcy and Elizabeth find a path to love? Or will new
revelations and the shadows of the past tear them apart before they are even together?

From the author of These Dreams and Nefarious, Tempted is a deliciously nuanced tale
of longing and trust. With good people in impossible places, close-knit families, and secrets
working in the dark, Darcy and Elizabeth have to fight every step for their future.

Are you ready to see the cover? Let's take a look. 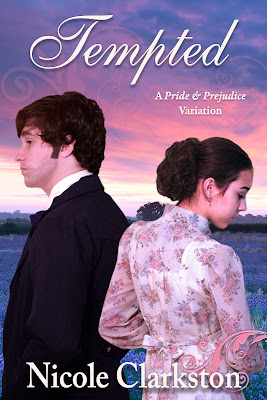 What do you think? Do you love these colors? I do! They are so soft and romantic. Does this scene depict the dawn of a new day and a beginning, or the end of day and the close of a chapter? Hmm, I wonder! I also wonder why Darcy and Lizzy are turned away from each other? There are so many questions that need answering.

I have two other reasons for "loving" this cover! My grandson and granddaughter are the models for Darcy and Lizzy. Some of you may remember Chayseland from one of Nicole's other covers, London Holiday. This is his fourth time as Darcy. Emily makes her first appearance on a cover. We had fun doing her hair for the photo session... well, sort of fun. It took me about two hours to fix it. She has so much hair and it is long. I didn't know what to do with all of it! lol I may have given out in the process, but she stayed calm and patient.

Do you want to see the back cover or full wrapper? Let's take a look. 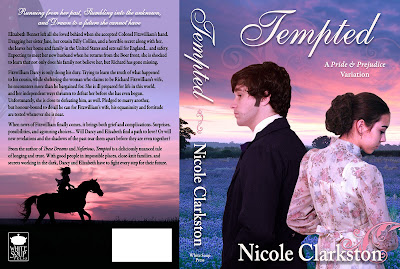 What is the girl(Lizzy) riding toward or away from? Do you notice the soldier vaguely in the upper left side of the back? From the blurb, we can make an assumption of whom that might be.

We hope you like the cover and are intrigued by the blurb. If you want more enticement, there's an excerpt! YAY!