It is my extreme pleasure to share with you the cover for Nicole Clarkston's
new novel, London Holiday.
We have worked hard putting this one together.
There were a few obstacles along the way, but thankfully,
everything came together in the end.
I have been so excited about this book. The story made me feel good.
It kept me smiling and loving every minute. I hope you will have the same experience. 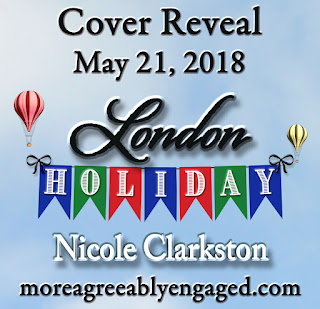 Before we get to the cover, here is the blurb!

*****
When the truth is harder to believe than disguise.

Drugged and betrayed in his own household, Fitzwilliam Darcy makes his escape from a forged compromise that would see him unhappily wed. Dressed as a footman, he is welcomed into one of London’s unknown neighbourhoods by a young lady who is running out of time and running for her life.

Deciding to hide in plain sight, Miss Elizabeth Bennet dodges the expectation to marry the man of her mother’s dreams. When the insolent footman she “found” refuses to leave her side until they can uncover a solution to their respective dilemmas, the two new acquaintances treat themselves to a holiday, experiencing the best of what Regency England has to offer.

Based on Jane Austen’s Pride & Prejudice, can two hard-headed characters with kind hearts discover the truth behind the disguise? Enjoy the banter, humour, and growing affection as Mr Darcy and Miss Elizabeth have the best day of their lives, and discover that they just might find love and romance while on a London Holiday. This book is appropriate for all ages.


Creating the front cover of London Holiday was lots of fun. Nicole wanted my grandson, Chayseland Taylor to be on the front cover. She asked me if there was anyone I could get to be Lizzy. I had the perfect person in mind. Kennedy Smith was Lizzy on another cover I had done several years ago, so she was first to come to mind. I asked if she would be willing to be my model again and she agreed. The next order of business was to find a time when Chayseland and Kennedy could be photographed. It took a couple of weeks to work out a date but we finally got together. They were real troupers too. It was the hottest May 17th (97 degrees F in the shade) it had been since 1925 and we were outside taking pictures in full costume. Neither complained and willingly did anything I asked.
They were both honored to be on Nicole cover, London Holiday!
Thank you Nicole, for allowing them this privilege.

Nicole, is there anything you would like to add before we go further?

I have long agreed with Janet that Chayseland is a perfect model for Darcy. He can master that aloof look, but at the same time, his eyes connect with you. He can look perfectly calm, but there is just a twinkle there, letting you know that there is quite a bit going on beneath the surface. That he happens to have that amazing hair and rugged face are side perks, but altogether, I love him as Darcy.

When Janet first showed me a picture of Kennedy, I just wanted to keep looking at her. She has a sweetness and an innocence to her that Elizabeth in the story does. She pulls off the teasing arched brow, the bubbling delight, and the soft, genuine expression that I was hoping for. I didn’t want a sultry kitten with collagen lips and transparent skin. She is perfect, and her eyes are kind. Not fashionable in the London world, perhaps, but just the thing to catch a jaded fellow like Darcy.


What I love about these two is that they look like real people, not models. Perhaps that is because they are real people, and I am honoured and deeply grateful that they agreed to be on the cover of London Holiday.

Now you know the story behind the cover so let's reveal the front and full cover for London Holiday! 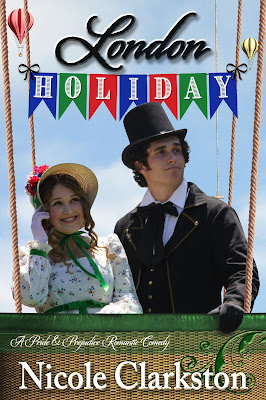 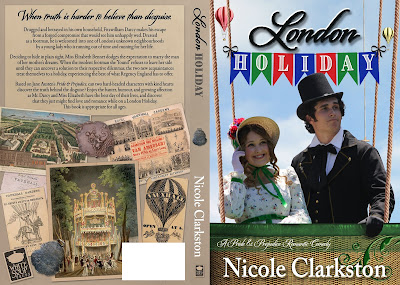 We hope you like the cover. I know you will love the book. It is such a neat story and fun too. Nicole told me that this book was the most fun book to write. I enjoyed reading along with her and eagerly awaited the next scene. This story has everything! There is a Darcy quite unlike any I have ever read before. He is such an awesome character and Lizzy is light-hearted and fun.
Nicole has agreed to share an excerpt with you. She has had several requests for Chapter 2.
For your reading pleasure, Chapter 2 is below. Enjoy!


Elizabeth tugged uncomfortably at her feet but could not extricate them without engaging in a wrestling match with a very strong and very unconscious man. She grimaced at her aunt. Mrs Gardiner rested her head back against the carriage squabs and exhaled, trembling. “We tell no one of this,” she commanded.

Well, tell us what you think? Doesn't this sound like a fun story! I absolutely loved it
and I feel confident you will too. We would love to hear your thoughts.
The eBook of London Holiday is available on Amazon and the Paperback will soon be available.

One eBook will be given away and the giveaway is international. Be sure you leave your contact info if you want a chance to win. The giveaway will end on the 25th of May at 11:59 P.M. Good luck!