Hello everyone! It has been awhile since I last posted. I've been taking a bit of a spring break from blogging. Well, I'm back today with a first time guest to my blog! Leigh Dreyer is here to talk about her book, The Best Laid Flight Plans. She shares a chapter with us and some lovely photos. I have to say that I think this story sounds quite fascinating, as does Leigh's life. I hope you all enjoy her post as much as I did! I'm sure you will love reading Chapter One of her book, ! Welcome, Leigh Dreyer, to More Agreeably Engaged. I'm happy to have you visit.

Hello!  I am so pleased to be here and speaking (typing?) about my new novel The Best Laid Flight Plans. Before I start off, here’s the blurb:

In this modern Pride and Prejudice variation, Captain William “Fitz” Darcy has just received a new assignment as an instructor pilot at Meryton Air Force Base. Soon he meets the intrepid 2nd Lieutenant Elizabeth Bennet, a new student at the base that he cannot keep out of his head. Elizabeth, on the other hand, finds Captain Darcy to be arrogant and prideful and attempts to avoid him at every turn. Despite Darcy’s insulting manners, Elizabeth soars her way through pilot training, but can she soar her way into love as well?

In the novel, our Mr. Darcy is a flight instructor and the novel begins (and ends) with him reciting from the poem “High Flight” by John Gillespie McGee Jr. Today, I wanted to share a little bit about the poem and why it finds a special place in the novel and in my heart.

John Gillespie McGee had received a scholarship from Yale University, but in September of 1940 he signed on to become an American pilot with the Royal Canadian Air Force. He travelled to Britain for combat duty flying the Spitfire in July 1941. In August or September of that year, he penned the poem “High Flight” and sent it in a letter to his parents in a letter home. His mother was able to get it published in a Pennsylvania newspaper where it enjoyed limited readership. On December 11, 1941, only four days after the US was attacked on Pearl Harbor and entered World War II, after colliding with an Airspeed Oxford (another plane) over England, McGee’s Spitfire crashed and he and the other pilot was killed. McGee was only nineteen. After McGee’s death, “High Flight” was published across the country and now graces memorials around the world.

For me, as the wife, daughter, and daughter-in-law of pilots, this little sonnet is the embodiment of something that they love and a life that I have come to love.

Here is the poem in it’s entirety:

"Oh, I have slipped the surly bonds of earth,
And danced the skies on laughter-silvered wings;
Sunward I've climbed and joined the tumbling mirth of sun-split clouds -
and done a hundred things You have not dreamed of -
wheeled and soared and swung high in the sunlit silence.
Hovering there I've chased the shouting wind along
and flung my eager craft through footless halls of air.

"Up, up the long delirious burning blue
I've topped the wind-swept heights with easy grace,
where never lark, or even eagle, flew;
and, while with silent, lifting mind I've trod
the high untrespassed sanctity of space,
put out my hand and touched the face of God."

For me, a novel about the grace of flight simply could not do without at least a passing mention of this poem and the beauty it encompasses. 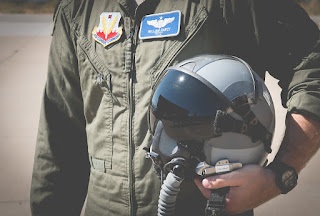 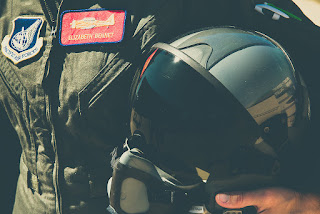 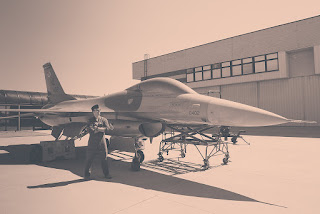 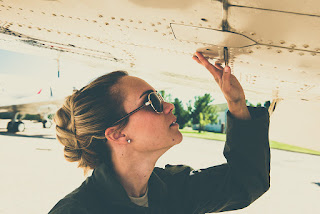 Leigh Dreyer is a huge fan of Jane Austen variations and the JAFF community. She is blessed to have multi-generational military connections through herself and her husband, who she met in pilot training. She often describes her formative years in this way, “You know the Great Balls of Fire scene in Top Gun (“Goose you big stud!!!”), where Goose and Meg Ryan have their kid on the piano? I was that kid.” Leigh lives with her pilot husband, a plane-obsessed son and a daughter who is almost walking.

Thank you for visiting today, Leigh. It has been great having you stop by. I'm honored to be part of your blog tour. Your history and living this life, has to make your novel more realistic.

The poem you quoted was extremely touching. I appreciate that you shared the poem and the story of its author with me and my readers. Beautiful!

I love your pictures. It was neat that you had the patches for Lizzy and Darcy! Nice touch! 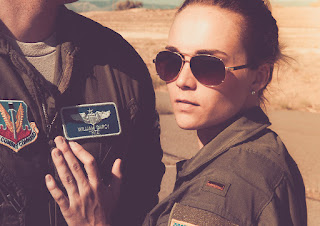 Leigh Dreyer is offering a giveaway for you, Dear Readers. Isn't that great! She will be giving away one eBook and the giveaway is international. Thank you, Ms. Dreyer! The giveaway will end at 11:59 P.M. on the 23rd of May. Good luck to everyone.
Posted by Janet T at 10:47 AM