Getting to Know Mr. Darcy with Monica Fairview

Hello Dear Readers! You are in for a treat today. If the title didn't grab your interest then my guest will. Monica Fairview is here today and it is her first appearance on my blog! I'm so excited to have her visit and it gets even better! She is talking to us about getting to know Mr. Darcy...what is Darcy really like? I know you will love her thoughts on this very special topic!

Thank you so much for coming by, Monica. I have been looking forward to your post and appreciate you sharing your insights with us. Monica also has a giveaway so be sure and look for it at the end of the post.

I’m delighted to be here visiting Janet’s charming blog. What better place to be when you wish to be agreeably engaged? Perhaps not more agreeably engaged than Darcy, who is contemplating Lizzy’s fine eyes, but I am most certainly very pleasantly engaged in the occupation of getting to know Mr. Darcy.

What is Darcy really like? That is the question I asked myself when I began writing Mr. Darcy’s Pledge, and to my surprise, I found the answer wasn’t easy. To try and work it out, I looked at the two main Darcys most of us are familiar with: Colin Firth and Matthew Macfadyen. ‘What traits do they have in common?’ I asked myself.

Colin Firth plays the aristocratic, arrogant Darcy. He seldom smiles (his mouth twitches when he’s amused). His collar is starched stiff so he has to turn his whole body when he wants to turn and look at someone. His face is largely expressionless, which means most of the emotion he conveys comes out through his eyes. This Mr. Darcy hides a great deal under that façade, and the smouldering looks he gives Elizabeth promise a depth of feeling he is forced to hide under an aristocratic demeanour. This Mr. Darcy will clearly have to learn to express his emotions. This Mr. Darcy gets wet on a hot day. He dives into a pool (I can’t help thinking of it as a metaphor for his emotions) and is caught out when Lizzy shows up unexpectedly and sees him in disarray, stripped of his social veneer. Fortunately, Lizzy is more than equal to the task of teaching him how.

In complete contrast, Matthew Macfadyen plays an inarticulate, tormented Darcy. He’s a Darcy who struggles to express himself, a brooding Darcy who feels a great deal but is unable to express his feelings because of his social context. He should have been a poet, like Byron perhaps, but somehow missed his calling. He struggles to fit into social expectations but doesn’t quite make it. Physically, he is very expressive. His fingers clench and unclench, his brow furrows, he smiles and he grimaces. He doesn’t dive into the water – rain pours down on him, soaking him, tormenting him, soaking into his very pores.

The funny thing is – I love both those Darcys, even though I wonder if they are actually the same person. Perhaps they are different aspects of that person we call Darcy. Or perhaps Matthew is the stripped down (I’m talking emotionally – don’t get too excited) version of Darcy – the one who can’t keep up the appearance of being a snooty, superior and unemotional aristocrat.

Either way, what the two really have in common is Lizzy Bennet, who appears on the scene and saves them from themselves.

But what if – and this is where Mr. Darcy’s Pledge starts, Darcy doesn’t have a chance of being saved. What if, as actually happens in the original proposal, Darcy’s outpouring of emotions just doesn’t impress the young lady in question. What if he has to take her rejection as final? Will he shut down his emotions and go back to who he was before he met her?

In Mr. Darcy’s Pledge, I explore that option. My perspective is – too late, mate! The stable door is open and the horse has bolted, so what are you going to do about it? 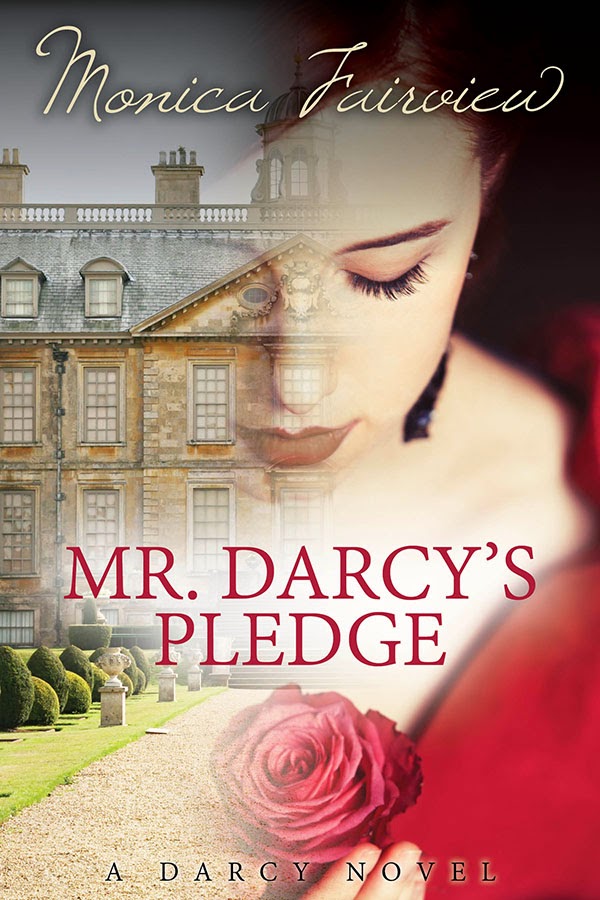 Here’s a little excerpt to whet (not wet) your appetite.

It was a warm, sticky night, one of those summer nights when, even with the windows open, it was difficult to breathe.  When Darcy finally managed to drift off, after what seemed like hours of waiting in vain for sleep to overcome him, a thunderclap roused him. He trudged to the windows to close them. The rain provided no relief from the heat; quite the opposite. With the windows closed, the room grew even more oppressive.

His brief periods of slumber were flooded with torrid dreams that ended in disappointment. In one particularly vivid dream, he thought Elizabeth was running towards him, but as he reached out to embrace her, he realized she was looking behind him at Wickham. In the dream, he was compelled to look on as Wickham came forward to seize her and plant his lips on hers.

Darcy sat up in his bed and ran his hands over his face in despair. Now both Wickham and Elizabeth were invading his dreams. Even if he was able to control his thoughts in the daytime, he could not control them at night.

It simply would not do. Something had to be done about it before long or he feared for his sanity.

The only way he would be able to forget Elizabeth was to replace her with a real-life bride. The problem was he did not wish to be hasty in his choice. He could not allow himself to be ruled either by passion or desperation. He wanted to choose calmly and rationally.

What then was he waiting for?

The sooner he decided what an ideal bride for Pemberley should be like, the sooner he could begin his search.

Full of determination, he rose and dressed without the assistance of his valet. Sequestering himself in the library, he sat at his desk, sharpened a quill, and began to write.

Torn between his heart and his mind… Mr. Darcy must make a choice.

Fitzwilliam Darcy has always been able to keep his emotions under control. That is, until he falls under the spell of Elizabeth Bennet and surprises himself by blurting out a proposal to her like a moonstruck youth. Stung to the quick by her rejection, his pride in tatters, and left with no possibility that she will ever return his regard, Darcy determines to put all thoughts of Elizabeth behind him. But not even Town with its boundless opportunities for amusement can keep the image of Elizabeth Bennet from pursuing him everywhere he goes.

By the time Darcy leaves Town to travel up to Pemberley, he has learned one thing. There is only one way of overcoming Miss Bennet’s bewitching hold over him and Darcy is desperate enough to try it. The solution is to get married. And this time, he is not going to choose a wife by allowing his emotions to lead him by the nose.

His choice will be entirely rational…

In Volume I of this Pride and Prejudice variation, Monica Fairview traces Mr. Darcy’s journey as he struggles to come to terms with the upheaval Elizabeth Bennet has caused in his life…and his heart.

Monica Fairview is the author of three other Pride & Prejudice based novels:  The Other Mr. Darcy, The Darcy Cousins, and the comic adventure, Steampunk Darcy. 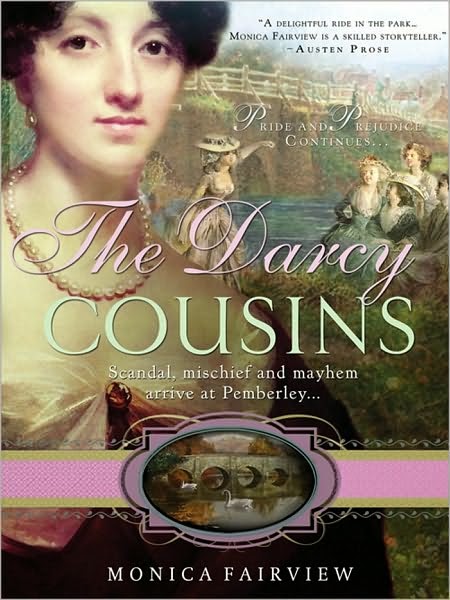 It is such a pleasure to have you visit, Monica. I loved your post AND getting to know Mr. Darcy a bit better. It is always interesting to get more perspective on the man we all 'love to love'. The excerpt does definitely whet the appetite! I must tell you that I really like the cover for Mr. Darcy's Pledge. It is beautifully done.

I will be reviewing Mr. Darcy's Pledge later in the week so be looking for more about this book then. I am happy to announce that Monica will be giving away one eBook to a lucky winner, worldwide. Thank you, Monica. To be entered leave a comment below as I always love reading your 'share in the conversation'!  Good luck to all. Be sure to include your email address in the comment. To prevent unwanted spam, put your email address with (at) instead of @. Winners will be chosen in a random drawing. Giveaway will end at midnight, May 27, 2014.
Posted by Janet T at 12:13 AM