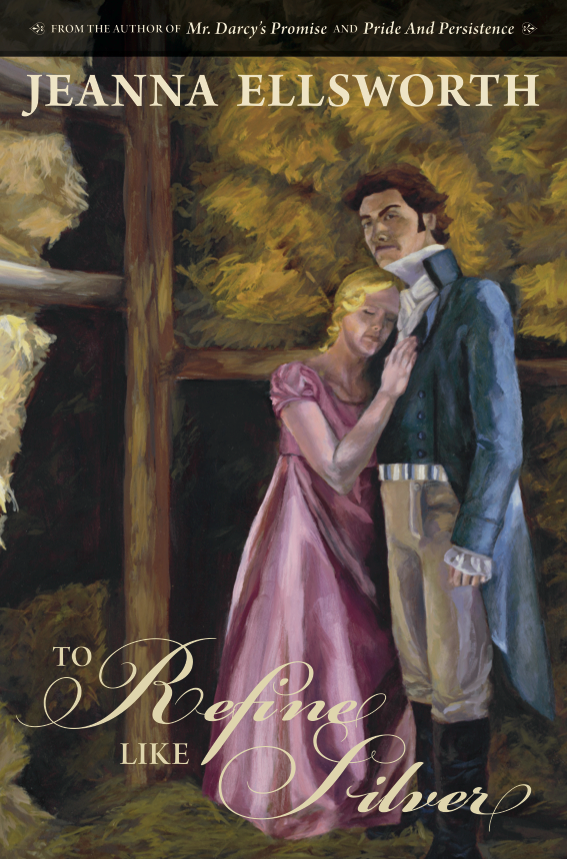 Hello to all from this lovely and wet November day in Texas. We need the rain and the chilly temps are wonderful, making it feel more like this time of year is supposed to feel. Good day to stay in, sip some tea and read a book! How about the new release, To Refine Like Silver, by Jeanna Ellsworth? That is what I will be reading today. What I have read to date has been thought-provoking and very good. More on that in a few days when I post my review. For now, enjoy an excerpt and the back cover blurb. There is a giveaway too. Be sure and read about it in the last part of Jeanna's post. (Isn't the cover of this book stunning?)

Thank you, Jeanna, for coming back for a visit. I am always glad to have you here.


Thank you Janet for hosting me on your blog! I thought since you were one of the first on the blog tour that I would give you an excerpt where Darcy and Elizabeth meet. This is in the very first few pages of the book. Elizabeth’s Aunt and Uncle Gardiner just inherited an estate near Lambton and Elizabeth is helping them settle in as new landowners of Saphrinbrooke. Enjoy!

She started walking the main path and soon heard voices from behind a manicured hedge. She turned the corner and saw that her uncle was in deep discussion with a dark-haired gentleman. The stranger’s back was to her, but she could see he was tall and broad shouldered. His stood erect with one hand bent behind him. She watched his fingers methodically flexing and contracting into a gentle fist.
Her presence must have been heard, because he turned around. He was not just tall and dark; his features were chiseled and striking. His jaw was strong and had a very stern set to it. But after the briefest of moments, there came a slightly raised eyebrow and a look of surprise, and the corner of his eyes and his brows relaxed. Whoever this man was, he was trying desperately not to show his emotions. She gave him a slight smile as her uncle addressed her.
“I see you have found me again in my hiding spot,” Mr. Gardiner said with a smile. “But I confess, I have a purpose in being out here this time. Let me introduce you to our neighbor, Mr. Fitzwilliam Darcy of Pemberley. He owns the grand Pemberley estate located on the other side of Lambton. I believe you said it was a mere five miles from Lambton, no?”
“Indeed,” Mr. Darcy replied.
Elizabeth could tell she was being evaluated and scrutinized from head to toe, and for a moment she wished she had taken more time with her hair. She recognized that her manners and appearance would reflect on the Gardiners, especially since this was the first landowner they had met in the area. She gave her best curtsy and smiled again. “It is a pleasure to meet you, Mr. Darcy.”
Mr. Darcy stood and looked at the lady in front of him. He didn’t know how to express his first impression of her, except to say that she sparkled. Was it her hair? Or was it the way she carried herself? Was it that smile? She was simply bright. She was beautiful, but that was not what took his breath away. It was something else entirely. The stirrings were so foreign that he stood staring at her for many moments before he realized he had not addressed her. “I would say the same to you; however, we have not been properly introduced yet. You now know my name, but yours remains a mystery.” Mr. Darcy pulled his eyes away from her intriguing gaze long enough to give proper attention to the gentleman speaking next to him.
“My apologies, sir,” Mr. Gardiner chuckled. “This is my favorite niece, Miss Elizabeth Bennet. She is my sister’s second eldest child. She will be staying with us for the next two months to help us settle in at Saphrinbrooke.” Mr. Gardiner noticed the questioning look on Mr. Darcy’s face and added, “Elizabeth has been helping her father run an estate in Hertfordshire for many years. I realize it is unusual for a man like myself to seek counsel from a much younger female, but her wisdom and insight is very valuable.”
“I do not doubt it. It is a pleasure, Miss Bennet.” Mr. Darcy had never wanted to kiss a lady’s hand before, but he wanted to now. Without thinking, he reached out and took her hand and bowed over it, giving it a small kiss. When he looked up, he saw that sparkle again and the corner of her mouth turned up in a teasing manner.
“And how, sir, have you come to such a conclusion? Is it really wise to accept Mr. Gardiner’s opinion of my character so readily? For you have nothing to judge me on but my appearance and his word. I have said but five words in addressing you, none of which have been wise or insightful.” Elizabeth grinned widely as he dropped her hand and returned his arm to the folded position behind his back. She could only assume his fingers were rhythmically moving as she had seen before. She let out a small giggle to let him know she was teasing him.
Mr. Gardiner chuckled, “And so it is with my niece! I warn you now to always be on your toes with this one. She is quick and intelligent, and she makes for good conversation.”
Mr. Darcy stood taller and tried to mask his flushed face as he struggled to frame a response. He wasn’t used to being teased; he had been shamelessly praised and showered with flattery by every lady of his acquaintance—but not teased. This was new territory for him.


As you can see, they have a much different beginning than the one in the Meryton Assembly. Mr. Darcy is drawn to her from the very beginning. That comment of “not handsome enough to tempt me” never gets said! I hope you enjoyed the excerpt. I am giving away a paperback (U.S. only) or an eBook (internationally) to one of the commenters. Good luck in the giveaway!

Now for a little back cover intrigue!

If Mr. Darcy had met Elizabeth Bennet in his beloved Derbyshire, would he have recognized her as the love of his life instead of dismissing her as someone “not handsome enough to tempt” him? This alteration of Jane Austen’s Pride and Prejudice adds a little spirit, flirtation, and charm to everyone’s favorite characters.
Early in the summer of 1811, Elizabeth Bennet travels to Derbyshire to help her aunt and uncle settle in as new owners of Saphrinbrooke. Elizabeth is soon introduced to the estate’s nearest neighbors: Mr. Fitzwilliam Darcy and his sister, Georgiana, who is suffering the results of a fateful trip to Ramsgate. Having endured several life tragedies herself, Elizabeth reaches out to the young lady of Pemberley. Under her radiant influence, both Darcy and Georgiana begin to look for help outside of themselves.

To Refine Like Silver is a romantic and spiritual journey where more than one of our favorite Regency characters must learn to fully rely on God. Their trials bring depth to the beloved story, and Mr. Darcy ultimately learns that our trials do not define us; rather they refine us.

To Refine Like Silver is available at Amazon and Barnes & Noble.

Doesn't this sound good. It is intriguing with a different tone. I like that. Thank you, Jeanna, for allowing me to be a part of your blog tour for this lovely book. It is such a pleasure to have you stop by.

As Jeanna mentioned above, there is a giveaway...either one paperback (US only) OR an eBook. (international) Please specify your choice when you leave a comment and please include your email address so that I may inform you if you are the winner. To be entered in the giveaway, ask Jeanna a question about her new book. I know many will come to mind as you read the excerpt and the back cover information. She would love to hear your thoughts so please have your share in the conversation. The giveaway will end at midnight, November 11.
Posted by Janet T at 9:31 AM