Jenetta James is back for a visit and I could not be more pleased! We are talking about her book, Suddenly Mrs. Darcy,  (which is fantastic), her love of Jane Austen and a few other things you will find very interesting! She is also hosting a giveaway so be sure and check out the info at the end of the post. Now, please join me in welcoming the lovely Jenetta James.

Suddenly Mrs Darcy, which was published in April by Meryton Press is your first novel, can you tell me what inspired you to write it and what memories you have of the writing process?

I don’t really know what possessed me to write Suddenly Mrs Darcy but I am glad that something did. I had been reading a lot of JAFF, having discovered it during my second pregnancy and one morning the idea for the prologue just jumped into my head. I wrote that part, which is a little under 1000 words very quickly and then had to build the story up around it. It is quite a short novel – not short enough to be a novella, but it is definitely not a “door stop”. Some parts came quickly and some were harder, but I enjoyed writing it all. At the time, my 2 children napped at approximately the same time each morning so I would take them out in their buggy with my laptop in the shopping basket and as soon as they were both asleep I would rush to our local coffee shop and get typing. The staff found me a very funny daily visitor with my two (mostly) sleeping kids and my ever expanding book. Sometimes my younger baby would wake up and I’d have to nurse, holding him with one hand and typing with the other. People talk about children limiting work but I almost feel that mine helped me. I don’t think I would have written Suddenly Mrs Darcy without them.

The whole book is written in the first person – it is Elizabeth telling her “alternative story”. How do you feel about that now?

I loved writing exclusively from Elizabeth’s point of view and felt that it was right for Suddenly Mrs Darcy, but it was very intense. One of the main conceits of the book is that because she is effectively forced into matrimony very early on and at great speed, it fundamentally changes how Elizabeth is able to approach things. What I hope the reader sees is a battle between Elizabeth’s character and her circumstances, so it feels right to present that through her eyes. It felt very much as though I was in Elizabeth’s head and it is quite different from writing more neutrally in the third person. I guess that it is a bit like method acting, you really begin to feel that you are the character. It was a great experience and I’d like to do it again but I would also like to write stories told in a more conventional way.

Are you writing anything at the moment?

I am currently working on a second novel which is one part Pride and Prejudice sequel, one part contemporary romance. It is pretty early days and it doesn’t even have a title at the moment. Half of the action takes place in the 1820s and half in 2014 so my imagination has to do a lot of leaping around. There is a big challenge in pulling off two different periods and I hope that I’m up to it! I also have a lot of ideas floating around in my head for other stories, some historical, some contemporary. The big challenge is writing down the outline before it gets forgotten or morphs into another idea.

When I was about 12, my aunt gave me the complete works of Jane Austen but warned me not to read it until I was a bit older. She thought that although I might understand the romance, the social satire would likely wash over my head. She was right of course and I have enjoyed all of them as I have grown up. Persuasion is the most adult story and I don’t think I properly appreciated it until I was about 30 although I had read it several times before. I am showing my age here, but I was 13 when the BBC’s Pride & Prejudice was aired in the UK. It was very much what would now be called “water cooler” conversation – even amongst school children. Everyone was watching it and talking about it. A friend and I decided to try to read the book just ahead of the TV programmes. So, we would read a few chapters and then watch the episode. Inevitably we misjudged it a few times. Memorably we were completely shocked by the proposal at Hunsford because we had not quite reached that bit in the book.  Maybe that was a good thing though, I think we appreciated the splendid acting in that scene all the more for being surprised by it.

What makes you love Mr Darcy?

Well, who doesn’t love Mr Darcy? He is the ultimate romantic hero and every woman’s Mr Darcy reflects her own idea of the perfect man. It is like the character that Jane Austen created has been so influential in people’s minds, he has been spun into all kinds of permutations. But when I try to whittle it down and get back to the original, there are a few features that I focus in on. Firstly, I think Mr Darcy is much funnier than he is usually given credit for. He has a dry wit that makes him very attractive. Secondly – he has just the right balance of silence and meaning - he never says too much but when he does speak he says everything that needs to be said. Thirdly and maybe most obviously, he’s bold, passionate and gorgeous. Now who could ask for more than that?

Exactly! Who. Doesn't. Love. Mr. Darcy! Your thoughts on the last question are 'spot on'. His wit and his balance of silence and meaning are impressive things to bring to mind. I like that. The bold, passionate and gorgeous are just the icing on the cake! 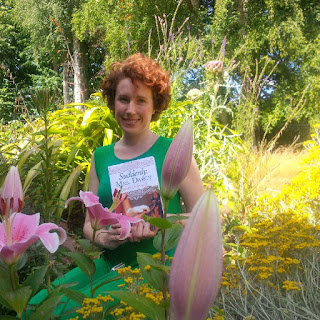 Author Bio:
Jenetta James is a lawyer, writer, mother and taker-on of too much. She grew up in Cambridge and read history at Oxford University where she was a scholar and president of the Oxford University History Society. After graduating, she took to the law and now practises full time as a barrister. Over the years she has lived in France, Hungary and Trinidad as well as her native England. Jenetta currently lives in London with her husband and children where she enjoys reading, laughing and playing with Lego. Suddenly Mrs Darcy is her first novel.

Thanks so much for stopping by More Agreeably Engaged again, Ms. James. It had been a delight to chat with you and hear your ideas for future novels and your feelings on Jane Austen, Mr. Darcy and your writing style. Thank you for sharing with us a little bit of 'you'!

If any of you have not yet read Suddenly Mr. Darcy, may I encourage you to do so. It is not a book to be missed and I was much impressed with it and Jenetta James as an author. I will be posting a review in the not so distant future. In the meantime, Ms. James is giving away one paperback internationally to a randomly selected reader. Just leave your comment below along with your contact information so I may find you should you be the winner. The giveaway ends at 11:59 PM, 27 July, 2015. Good luck to all and thanks for visiting.
Posted by Janet T at 10:45 AM