Cat Gardiner and 'The Many Faces of Mr. Darcy'

Today I have another author who is visiting More Agreeably Engaged for the first time! Isn't it great to be having so many new faces stop by? I am loving it. :)

Cat Gardiner is my guest today and she has given us some wonderful pictures of Mr. Darcy and lots of food for thoughts as to the many faces of Mr. Darcy. Her ideas are delightful! Many books came to mind as I read this post. I'm quite sure, dear readers, that you will enjoy 'these many faces' as much as I did. What books come to your mind?

We also have the privilege of reading an excerpt from Ms. Gardiner's latest release, Denial of Conscience. You remember Lucky 13, which was the first book by Cat Gardiner? It has that eye-catching cover in Christmas red and green. (You will see it below.) It also won Favorite Modern Adaptation of 2014 at Meredith's Austenesque Reviews. Congratulations! If anyone is interested in reading Meredith's review of Lucky 13, you can find it here. 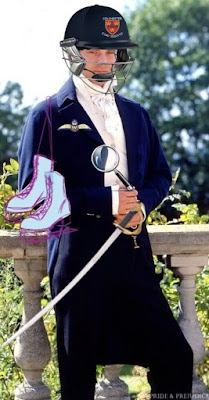 Thank you so much Janet for hosting me at More Agreeably Engaged.  I’m honored to be here! I toyed with a ton of ideas for my visit, vacillating from “Marrying Mr. Darcy” and “Mr. Darcy’s Advice Column,” but have felt the pull of “The Many Faces of Mr. Darcy” for a couple of years now.
The world over knows the name Mr. Darcy but he comes with many faces, and I don’t mean the never ending difference of opinion, split of camps between Colin Firth and Matthew Macfadyen as the best Mr. Darcy.
Who is he?  We have read him proud and arrogant but we have viewed him on television and in cinema as both shy as well as taciturn, even awkward. But one thing that is for sure: he is the embodiment of every romantic male lead and women swoon, imagining themselves as his Elizabeth Bennet. Character and personality aside, JAFF has allowed each author the liberty to write him as her/his very own Mr. Darcy, placing him in situations and locales where their imagination wandered. Bravely, some authors ventured from Regency, taking Jane’s beloved hero and inserting him into the Twentieth Century and more contemporary life – even futuristic worlds.  Personally, I don’t think the “Modern Darcy” is such a stretch.  After all, Jane didn’t write historical fiction, she wrote for her contemporaries, who just happened to wear cravats and Hessians. But that’s not the subject I want to play with in this article meant to be fun and certainly not a treatise on anything other than “what does your Mr. Darcy do?”
Re-imaginings fascinate me and I’m amazed at JAFF author creativity when building their Mr. Darcy.  In Regency he’s usually a gentleman landowner, but did you know he’s also a spy for the British Empire? Mr. Darcy is a guardian angel!  He’s a Lord and an Earl.  He’s a ship’s captain and a clergyman! Elizabeth’s man is a vampire and a panther shifter, too! Lions and tigers and bears, oh my!! 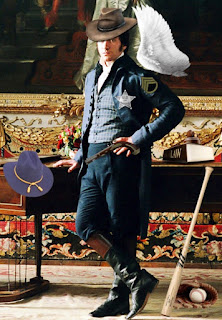 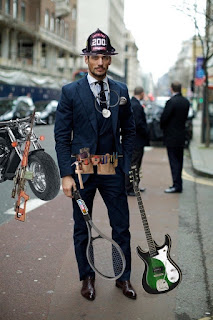 Thus far I have read clever re-imaginings with my modern man as a rock star, tennis and baseball player, WWI and Civil War soldier, businessman, playboy, symphony conductor, NASCAR mechanic, astronomer, judge, rugby player, and my favorite – WWII pilot (yes that’s mine.) Lucky 13 was born from that premise―a lark actually―as I had yet to read of a Mr. Darcy firefighter.  I had this image burned on my brain of him shirtless, wearing those bunker pants and thought, “Well that’ll be something different for him to do.”

Enter: Denial of Conscience. A fast, edgy, and completely non-canon modern with a Mr. Darcy who rides a Harley, wears black, and drinks Jack Daniels.  His professional moniker is the “Iceman,” but our dear girl melts that persona over the course of a few weeks. Not born out of a lark, but more out of my absolute love of James Bond movies, my DoC Fitzwilliam Darcy is former military, now a government sanctioned assassin.  Yes, that’s right, an assassin.  It’s not his condescending manner or cold, judgmental nature that takes down his or America’s enemies, it’s his sniper rifle.

“The ex-Navy SEAL breathed out and, holding his lungs empty, placed his mind in time with his heartbeat. Between beats, he squeezed the trigger with the ball of his finger.
Bolivia’s drug kingpin, the Lord of the Jungle, fell dead from the bullet’s sudden impact directly between his eyes—Fitzwilliam Darcy’s trademark sniper hit.”
**

The assassin was thankful that Charlie, as operation scout, determined the best hide site for this job. The unlikely position for concealment was out in the open. This field of uncut grass was dry and weedy with an unobstructed view of the full façade of Longbourn Plantation House. Two hundred yards away from the front of the residence, Darcy became part of the neglected grass and brush after donning his ghillie suit; not even a scavenging possum knew the difference when its short legs ran over the back of his long ones. The synthetic camouflage suit covered him completely, giving the appearance of just another mound of grass. Even his rifle lay concealed.
The Army had trained Charlie well. Army sniper school was nothing to sneeze at, but the military operated in two-man sniper teams. Although Rick, Charlie, and Darcy were former military, they now worked for Uncle Sam in a different capacity. Obsidian acted outside the rules of war, and in doing so, they did things their way. After the disastrous Cuba debacle, Obsidian changed its procedure. Now they were only one-man units with a scout surveying ahead of time when possible.
It would be there, near the entrance of the estate’s land where only the postal delivery truck traveled on the dirt road, that Darcy would observe, meditate, and attempt to remember every orchid species until the anticipated hour of his kill shot the next day. He was in place, ready to wait and strike.
Looking through the scope of his rifle, he carefully examined the graying house, noting that, similar to the garage and outbuildings, it was also in a sorry state of disrepair. He frowned at the annoying black shutter precariously hanging by just a few nails. Such a waste of history and real estate, he thought. Longbourn was in need of either a bulldozer or a massive amount of cash to restore it to its historic grandeur. He wondered if that was the reason behind the target’s traitorous decision. Irrelevant, it wasn’t any of his business. The object of his bullet was a pathetic weakling and a traitor to his country. That was all Darcy needed to know in order to do his job effectively.
He took note of the closed heavy curtains in the target’s study on the first floor and hoped it was an unusual occurrence. Otherwise, he might have to relocate his position to a more advantageous one, perhaps to the back of the house for a bedroom shot.

So we now have an assassin Darcy to add to the growing list. My next novel, Villa Fortuna, gives us a cosmetic surgeon Mr. Darcy. You know what they say about a surgeon’s hands, right?  Oh they are as skillful as assassin Darcy’s trigger finger. *faints*  I’ve always had a secret plot bunny Darcy (shush, don’t tell anyone) but I will one day get up the nerve to write a 1930s Circus and the face of the Ring Master or Lion Tamer will be Fitzwilliam Darcy!  Darcy does the Big Top.  Now we’re really talking lions and tigers … oh my!
These days, I’m lost in the world of my imagination, so I don’t read as much, but I know the list of varied, creative professions for our hero is long.  Recently, I popped on over to a lovely little site JAFF Recs where the hostess lists all the many professional categories, but so many have yet to be filled.

Do you have favorite and different JAFF Darcy persona? Are there any memorable scenes or lines from a story that has stuck with you?  Maybe you just have always had a hope that someone would channel your plot bunny Darcy.  I’d love it if you would share it with us. Leave a comment for me and other readers and you’ll be entered to win a Denial of Conscience e-book or paperback - just in case you’re curious about assassin Darcy.  Thank you for joining Janet and me in this little bit of fun.

Cat Gardiner loves to take you around the world in her novels, places you may never have been with music that maybe you've never heard. A member of Romance Writers of America and her local chapter TARA, she enjoys writing across the spectrum of Pride and Prejudice inspired romance novels. From the comedic Christmas, Chick Lit Lucky 13 to bad boy biker Darcy in the romantic adventure Denial of Conscience, these contemporary novels will appeal to many of her Mr. Darcy lovers.
"I love an adventure! So my storytelling uses fresh innovation to bring the reader on a multi-tiered journey. Using sights and sounds with Spotify music playlists, blogs, and inspirational image Pinterest boards, the reader becomes immersed. Books should be an escape to a time, place, or world where you can lose yourself."
Married 22 years to her best friend, they are the proud parents of the smartest honor student in the world - their orange tabby, Ollie. Although they live in Florida, they will always be proud native New Yorkers.

Cat Gardiner, many thanks to you for being my guest and giving us these 'faces of Mr. Darcy' to not only look at, but to read about! It was such fun and I enjoyed it immensely! It was different and lively. Thank you for visiting and sharing with us. (Assassin Darcy was a loveable and likeable bad boy!I didn't want to quit reading about him!)

As Ms. Gardiner mentioned above, there is a giveaway and it is very generous indeed. She is giving away a Paperback, US only, an eBook, internationally of Denial of Concience. Thank you so much Cat Gardiner for giving the readers a chance to win and read your new book. I know, for a fact, it generated much interest with your exciting 'Hog Tour' earlier at Vanity & Pride Press. Readers, you know the drill. Leave us a comment with your contact info to be entered in the giveaway. To go back and quote Cat Gardiner - "Do you have favorite and different JAFF Darcy persona? Are there any memorable scenes or lines from a story that has stuck with you?  Maybe you just have always had a hope that someone would channel your plot bunny Darcy. "  The giveaway will end at 11:59 PM on 14 September, 2015. Good luck to all!
Posted by Janet T at 12:07 PM