I am so happy to welcome back, P.O. Dixon, to More Agreeably Engaged. It is always such a pleasure to have you as my guest. I have read and enjoyed many of your books and am anxious to read your latest. Maybe after the rush of the holidays, I can manage a little quiet time to read. Now that would be a lovely way to spend the end of November and the beginning of December! :)

We are fortunate, indeed, as Ms. Dixon has chosen to share part of  Chapter 1 with us. If any of you want to read more, there is an excerpt for Chapter 3 at Austen Authors. Now, please join me in welcoming P.O Dixon. 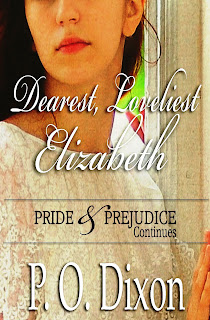 I’ve written more than twenty Pride and Prejudice inspired stories and shared them with so many of you during the past five years. I have asked and answered the following questions: What if a peer raised Elizabeth? What happens if Elizabeth attempts to reunite her sister and Mr. Bingley? What if Miss Anne de Bourgh befriends Elizabeth and asks for her help in garnering Darcy’s favor? The list of ‘what-if’ scenarios goes on, resulting in many different paths to happily ever after for our dear couple.

Dearest, Loveliest Elizabeth is my newest release. For the first time, I endeavored to answer the question of what happened after the happy-ever-after ending of Pride and Prejudice. The story begins where canon concluded.

The honeymoon period is at an end. Darcy and Elizabeth are throwing their first grand dinner party at Pemberley. The heads of many of Derbyshire’s wealthiest families are invited. So are Mr. and Mrs. Charles Bingley. Elizabeth could not dream of taking on such a task without her sister Jane by her side. Mr. and Mrs. Gardiner have invitations as well as Lord and Lady Matlock. With all these people, one might think both sides of the Darcys’ family are well represented. Not so fast. Guess which other family members decide to come to dinner.

I hope you will enjoy the following excerpt from Chapter 1.

The atmosphere at Pemberley took a decided turn later that day. Elizabeth ought to have known her mother would look upon the occasion of Pemberley’s first formal dinner party as a chance to get rid of her remaining unmarried daughters, Mary and Kitty, by throwing them in the path of wealthy men of Darcy’s ilk. Indeed, fewer than two days after the Bingleys and the Gardiners arrived, Elizabeth’s Longbourn relations descended upon Pemberley’s doorstep.

She was not entirely surprised to see her father, Mr. Thomas Bennet, arrive unannounced, for he delighted in coming to Pemberley, especially when he was least expected. As familiar as he was with the house, he had made his way straight to the library where she suspected he would remain for the better part of his visit.

Having refreshed themselves after their journey and now brightly attired in a rainbow of soft colors, Mrs. Fanny Bennet, Mary, who was next in age after Elizabeth, and Kitty, who was next to Mary, joined the Darcys, the Bingleys, and the Gardiners in the parlor. An amiable, intelligent, elegant woman, and a great favorite with all her nieces, Mrs. Gardiner was immediately surrounded by Kitty and Mary: the former impatient to hear all there was to hear about the newest fashions, and the latter eager to learn which books she ought to read next. Mrs. Bennet contented herself with a steady stream of questions on the topic of who would be attending Elizabeth’s grand dinner party. How many of the guests are gentlemen? Are any of them single? Are they rich?

Such conversation, it seemed, was the order of the day and Elizabeth began to consider that her family’s being there was not the worst thing that could happen. Indeed, it was rather nice to see the faces of so many of the people whom she loved in one place, sitting and talking, enjoying one another’s company. She even supposed that perhaps she ought to have invited them. It had been far too long since they had all been together—not since her nuptials. Who was to say when next they would see each other again. No sooner had she accustomed herself to this notion than the butler, Mr. Thurman, entered the room.

The tall, austere man cleared his throat. “Mrs. Lydia Wickham,” he announced. In a flash, Elizabeth’s youngest sister swept into the parlor. A quiet hush overtook everyone assembled about. Mary, who had moved to sit off by herself in a corner, looked up from her book long enough to nod a less than enthusiastic greeting to her sister. Lydia’s own exuberance earned the highest admiration of the sister who was next to her in age. Kitty, a pretty, brown-haired young lady with bright eyes and a quizzical smile, giggled with excitement.

Mrs. Bennet’s joy in seeing her favorite daughter for the first time since shortly after the latter had married was beyond expression, and her spirits were immediately heightened. She was never quite as lively as she was when in company with her youngest. The merry matriarch sprang to her feet and tore across the room.

“Oh, Lydia, my dear, it is such a happy surprise to see you! Turn around and let me have a look at you!”

Lydia was a stout, well-grown young woman with a fine complexion and friendly countenance. A favorite with her mother, whose affection had brought her into public at an early age, she had high animal spirits and a sort of natural self-consequence that had only been encouraged by the fact that, although the youngest, she had been the first of the five Bennet daughters to be married. The particulars of how said marriage came to be never concerned her. Relishing in her mother’s unabashed adoration, Lydia spun herself around in a proud manner.

Mrs. Bennet clasped her hands to her chest. “I can easily surmise that your dashing husband is taking prodigious care of you.” Winking, she added, “You were very clever in landing such a handsome man. No doubt he spoils you exceedingly were one to judge by your elegant dress and your fine jewels.”

The proud matriarch was not alone in noticing Lydia’s lavish attire. Elizabeth could not help silently noting her sister’s extravagance as well. During the past months, such relief as it was in her power to afford, by the practice of thrifty economy in her own private expenses, she frequently sent to the Wickhams. It had always been evident to her that such an income as theirs, under the direction of two people so excessive in their wants and heedless of the future, must be insufficient to their support. Her benevolence aside, she decided it was best not to judge her sister on the basis of this one factor alone. Who is to say this is not the only such dress my sister owns?

“Just imagine; you are happily married to an officer! There was a time when I should have loved to have married an officer, but then I met your father and there was the end of that dream.” She looked around the room. “Where is our dear Wickham? Pray you did not travel all this way alone, child! Where is your excellent husband?”

“Oh, Mama! I assure you that my Wickham and I did indeed travel to Derbyshire together. He is in Lambton—that dreadful little town. When last I saw him, he was settling into a dreary little room in a tiny little inn. Oh, if only you could have seen the place, then you would have known in an instant that it is no place for the sister of one of the richest men in all of Derbyshire. I told the innkeeper as much, and I insisted he must give us the finest rooms in the establishment, but he would not hear of it. Oh, Mama, you will never guess what he did. Well, I will tell you what he did and save you the trouble.”

“Do tell, my dear,” cried Mrs. Bennet when she could.

“I told him that if he fails to heed my demands that we shall take our patronage elsewhere and he said that he could not and, what’s more, he would not even if he could—complaining of having been ill-used by my dear Wickham in the past, but that was ages ago.”

“My dear Lydia, why did Wickham not come with you to stay at Pemberley? No doubt there is ample room.”

Darcy had heard enough. “George Wickham is not welcome at Pemberley,” he said in a tone that invited no further discussion on the matter.

Not easily put off by the absence of an invitation as evidenced by her even being at Pemberley, Mrs. Bennet exclaimed, “Not welcome at Pemberley! Why, I have never heard of such a thing.” She looked away from the master of the house and turned her aggrieved gaze to the mistress. “When is it ever proper to exclude one’s own family from one’s home? Why, I should never dream of turning family away. Did I not welcome that horrible Mr. Collins and his scheming wife, the former Miss Charlotte Lucas, at Longbourn? We all know I took no pleasure in doing so, but family is family. We are not allowed the privilege of picking and choosing those whom we like best.”

“Those are my sentiments exactly, Mama,” cried Lydia. “However, I am not angry and neither is my Wickham. In fact, he told me to be sure to give his best wishes to Mr. and Mrs. Darcy and most especially to Miss Georgiana.” Lydia threw a casual glance about the room, dismissing everyone she knew until her eyes landed on someone whose acquaintance she had not made. She sashayed over to where Georgiana was standing and curtseyed. “You must be Miss Darcy. My Wickham said you were a comely creature. No doubt my sisters have told you all about me and how I was the first Bennet daughter to marry. I am quite eager to further our acquaintance, for I am certain you and I have much in common.”

The book is available for pre-order on iBooks, Nook and Kobo.


Thank you again for being my guest today. I always look forward to your visits.  I appreciate you sharing your thoughts and an excerpt with me and my readers. I know they will enjoy the opportunity to win this latest book! Yes, that is correct. Ms. Dixon is offering one eBook as an international giveaway and one paperback for US readers. Please have your share in the conversation but don't forget to leave me your contact info in case you are the randomly selected winner! Giveaway will end at 11:59 PM on the 30th of November! Good luck to all. To all my US readers, I wish you a very Happy Thanksgiving!
Posted by Janet T at 11:30 AM