I hope you had a wonderful Christmas and will have a safe and enjoyable New Year's Eve tonight! I will stay up and usher the new year in but without all the fanfare. I think my night will be a quiet and cozy evening of reading with a bit of hot tea and milk! Speaking of reading, I am posting my review of a wonderful book by Pamela Lynne, that I recently finished. It is delightful and I hope those of that have not yet read it, will put it on your 'to be read' list for 2016. 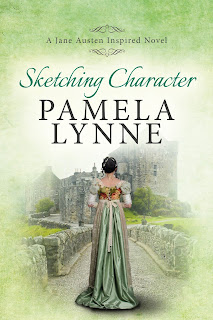 Once in a while I read a book that leaves me with a sense of complete satisfaction…a warm fulfilled feeling that the book was everything and more than what I had hoped for. Sketching Character by Pamela Lynne is that kind of book. That’s not to say that it contains no misunderstandings or angst because it does but all is resolved in such a way that everything felt perfect and as it should be, a truly feel-good novel.

The story begins with a prologue of much importance. The incident that occurred will have implications throughout the book and will influence the behavior and actions of several of the characters. It will completely change one of the characters and eventually for the better.

Chapter one starts with Lizzy preparing for her visit to Charlotte Lucas at Hunsford. A carriage accident in the rain and a rescue by Darcy and Colonel Fitzwilliam set in a motion some of the changes that follow. There is no botched first proposal but Darcy is still Darcy and hesitant to declare himself for reasons completely different this time around. His reasons were justified in my eyes and for a good cause. It was not so easy for Elizabeth especially when she was fed tiny bits of misinformation…just enough to make her doubt the man she had come to ‘know and understand’.

I liked the Viscount but not so much Colonel Fitzwilliam. He did redeem himself later in the story but he was not the affable and loyal cousin that I have come to expect. I loved Anne and the way she was portrayed. Her plans and strength of conviction were a force to be reckoned with. Lady Catherine – watch out!

Jane was such a sweet and gentle Jane as one would expect but she does ‘see’ more than usual. I liked that and found her ‘change’ to be a surprise but a pleasant one. Mr. Bennet was, well, Mr. Bennet. He continued his negligence of a serious situation and as a result, some of the respect previously held by his favorite daughter, was lost. Lydia has a significant role and her character grows into a better person, one which I came to like.

Encouraged by his cousin, the Viscount, Mr. Darcy learns to fight or box instead of fencing. I loved how some of the characters that he met while residing at the boxing club played a significant part later in the story. It was very well done! Readily available is Caroline Bingley…and she is as obnoxious as ever! There seems to be no limits to her rudeness and her presumptuousness. But then comes Lydia and Miss Bingley gets the best ‘set-down’ I think I have ever read. It was subtle but oh, so effective!

This was such an entertaining book and one that I highly recommend. There were several unexpected twists to the narrative that I found very agreeable. Pamela Lynne is a skilled author and tells a fantastic story. Her book kept me reading and ‘held me captive’ until the last words on the last page. I will be rereading Sketching Character!

Thank you for stopping by to read my review. My desire is that it enticed you just enough to make you want to read it for yourself. It is well worth your time and I hope that it will leave you with the same feelings of warmth and satisfaction that I experienced upon its completion.

Once again, I wish you all a very Happy New Year. I look forward to many great author visits and giveaways in 2016 and hope you will continue to visit and participate. I appreciate the support that you have given my blog over the past few years. I always love reading your share in the conversations. Thank you for being a part of my life and my blog world.
Posted by Janet T at 1:52 AM