Cat Gardiner is my guest today and she is sharing an excerpt with us from her latest release, Villa Fortuna! She also has a pretty special prize package.  Be sure to leave a comment because you do not want to miss out on this one!

It is such a joy to have you back, Cat, and I appreciate the very generous giveaway that you have for my readers! I know they will too!  Ummm...I do like your choice for the "Darcy" hero!  :)

Thank you Janet for accepting my calling card at More Agreeably Engaged! I’m so happy to be here to share an excerpt from my newest novel, Villa Fortuna, with you and your followers. 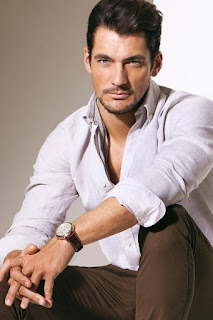 Having published VF in December, I’ve visited a few blogs and have enjoyed talking with readers about the Clemente sisters and the love of family, especially during the holidays. However, we haven’t met our “Darcy” hero – Dr. Michael Garin, yet, so I thought snippets from Chapter Two would be a proper introduction.

When my hairdresser gave me the plot bunny in February 2015, I immediately knew who to cast. Villa Fortuna was written around my ideal for Mike:  British Model David Gandy. My BFF and I brainstormed to cast Stella Russo De Luca, VF’s “Lady Catherine” character. I think we hit the nail on the head casting the incomparable Shirley MacLaine as Mike’s grandmother. I hope you enjoy this little glimpse into Mike’s world.

Doctor Michael Garin of Manhattan Aesthetic Associates (MAA) was known among the affluent strata of New York City as the cosmetic surgeon for everything from simple Botox or Radiesse injections to laser fillers and surgery-free facelifts. Following in his father’s footsteps, he had built quite an esteemed reputation for himself in the advancement of body sculpting. So much so that the 4,106 friends of the “MAA Body Fan Club” on Facebook reverently referred to him as “Michelangelo.” It was an abhorrent nickname on a social networking site he privately despised but acknowledged with a cool ambivalence since its creation this past year by one of his obsessed patients.
Bright blue eyes stared blankly at the sculpture on the 60th Street and Park Avenue mall beyond his office window. It was two in the afternoon and he was killing time between appointments. Actually, that’s a lie. He was gathering strength and nerve, awaiting his next patient’s arrival. She was a plastic addict, a Barbie Doll wanna-be, and he didn’t quite know how to proceed because she was also his best friend’s sister. Tenting his index fingers against his lips, he surveyed all his potential responses to her, banishing each one as they popped into his mind.
But you were a C-cup three months ago. I won’t do it, not again. No, that wouldn’t be effective.
You know that catwoman person? Well, you’re headed in that direction and going to ruin my reputation in the process. I’m a dog person. That would be a mean, below-the-belt comment, though very tempting.
Blair, your lips will end up looking like your labia. No, that may be the look she’s going for. He’d already tailored those lips to her specifications. Come to think of it, he almost backed out of that surgery, too. He shuddered at the remembrance of her labiaplasty.
You’re beautiful enough. I refuse to make any more changes. No, she might take it as an invitation for dinner, or worse—sex. Surgical alteration of that area, with her under anesthesia, was the closest he’d ever go to laying his fingers to her flesh and, for the record and his own sensibilities, he had double gloved. Yet still, he was the one who had to live every day with the disturbing image burned onto his brain.
Mike shuddered again.
Every scenario he played in his mind seemed to draw the same expected, repeated conclusion—her manicured fingers flirtatiously running down his white lab coat with a coo of “I just have to have your hands on me.” The recollection of her tug to his necktie, attempting to pull him onto her suddenly reclining form, made his flesh crawl and he resisted the compulsion to depress the antibacterial pump at the corner of his desk.
This was always the hard part of what he did—denying a patient their right to pay for surgical enhancement. At times such as this, he wished himself to be a greedy man or, more importantly, an atheist. His religiosity and conscience battled with a career in which he spent his days altering God’s perfect creations with the slice of a scalpel all for vanity purposes.
“Doctor Garin, your grandmother is here to see you,” Gwen, his assistant, announced over the speakerphone.
He gazed up to the ceiling thinking that this day couldn’t get much worse. It seemed that finding his peaceful center before Blair Channing’s appointment was not to be had. “Thanks. You can send her in.”
He sat back in his chair, readying himself for the mini-tornado about to blow into his office.
In other Italian families, his grandmother would be referred to as his “nonna” maybe even “nonnina” because of her slight five-foot-two inches, but Stella was no sweet, lovable nonna. There was nothing remotely nonna-esque about the dictatorial, full-of-spit-and-vinegar redheaded hellion. 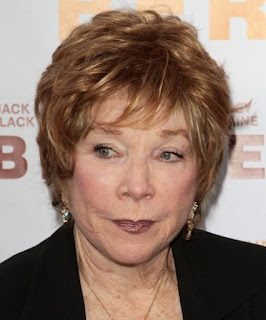 Stella Russo De Luca, his mother’s mother, burst into his sanctuary with her usual dramatic flair,
slamming the door against the wall and nearly toppling the bronze Rodin replica statue of two hands from its pedestal. She stood at the office threshold with nude-colored fingernails clutching slender hips, seemingly clawing the fabric of the white Oscar de la Renta suit she wore. Her short hair had been re-touched recently, as well as her Botox injection, which was obvious when perfectly arched eyebrows remained stationary as she employed her usual expressionless expression.

Once again, Mike wondered why she still allowed her salon aesthetician to inject her illegally when he could do it without the common side effect.
Having made her grand entrance, the haughty whirlwind nearly sucked the air from the room when, with chin raised, she spoke through puckered lips, “They’ve arrived!”
He sighed and rubbed a hand across his brow. “Who has arrived?”
“Those damned Clemente women! That’s who! The will has been read. How dare they stake claim to my ancestral home.”
“No, it is their ancestral home and has been for something like eight decades.”
“As my eldest grandson, it is also your building!”
His six-feet, two-inch tall frame walked around the desk, then affectionately kissed his diminutive grandmother’s cheek cautioning, “Calm yourself, or you’ll have a coronary.”
“I assure you, Michael, I will not be dropping dead before Villa Fortuna has been signed back over to a Russo heir.”
“I hope you’re right. Apart from the fact that I’d miss you, it’s a great building and a great location. Once I turn it into luxury condos, it’ll be the perfect investment. I’ve had my eye on it for some time.”
Stella took a seat facing his sleek steel desk, and removed a compact from her handbag, dabbing repugnant summer perspiration from her cheeks. “I have been engaged in this battle for Villa Fortuna for 20 years, and I am not going to give up the fight now that the witch is dead.” She closed the powder case with an abrupt snap. “I intend on ramping up my efforts.” …

She paused assessing her debonair grandson up and down—from his black, wavy hair, light stubble beard, to his size twelve Ferragamo shoes. “Of course, there is another way to reclaim ownership of the building.”
Familiar with that devious look of hers, he abruptly stood, heading back around to his desk chair, effectively putting space between them. “Oh, no… forget it. Don’t even think about it!”
“But why not, Michael? Marry, divorce, and then buy the puttana out of her share of Villa Fortuna. It is your duty to your famiglia.” …

“Did you hear me, Michael? Do your duty. I don’t care which one you marry, just pick one, and be done with it. You’re almost thirty-four for Christ sake. It’s time you married and had children. Not a Clemente’s child, of course. It would pollute your gene pool and my father would roll over in his grave.”
He ran his hand through his hair. “That’s not going to happen. I won’t be dating any of these women as a means of laying my hands on a piece of real estate. As much as I desire the building, in the scheme of things it’s not all that important to me. It’s also unethical and deceitful and, like Joey, you know it goes against my grain.” …
“Doctor Garin, Ms. Channing is here for her two thirty appointment,” Gwen announced through the speakerphone.
“Thanks. Put her in exam room number three, and I’ll be there in five minutes.”
“But Doctor Garin, there’s no exam table in number three.”
“Exactly.”

Poor guy, huh?  He sure has his hands full. I hope you’ll consider Villa Fortuna for your TBR pile in 2016. You may have a few laughs. I know I did when writing it. Thank you for stopping by More Agreeably Engaged and reading! Please leave Janet and me a comment to be eligible for the last of Villa Fortuna’s Blog Tour giveaways. 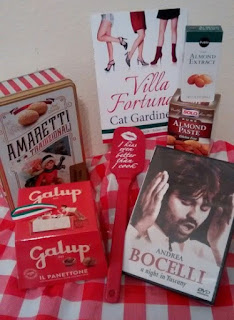 For US Entry winner:  Because our Lizzy loves to bake and several scenes take place in Messina Bakery below the Clemente sisters’ apartment, this special prize pack includes a Villa Fortuna e-Book, an Andrea Bocelli DVD, sweets, and tools of Lizzy’s escape in the kitchen with a recipe!

Thank you again, Cat, for stopping by and sharing an excerpt from your book. Even though I may have 'blushed' a tad reading of those surgeries, I chuckled too! :) Villa Fortuna is definitely on my TBR list. I know there has been a lot of buzz about this book and that has to be exciting for you. I wish you the best with it and am anxious to learn more about what you have in the works for your next one. Please come back and visit again.

Readers, don't forget to leave a comment and your contact info to be entered. The giveaway will end on the 25th of January at 11:59 PM. Thanks for visiting and good luck to all!

If you haven't checked out the MAE Awards for Favorite Books of 2015, please do. Cat Gardiner's Denial of Conscience was a winner along with several other great reads by some fabulous authors.
Posted by Janet T at 10:58 AM