Welcome back, Rose Fairbanks! It is always great having you stop by More Agreeably Engaged and I know my readers enjoy your visits too. I'm excited about your newest release, Sufficient Encouragement, and I absolutely love the cover! It is gorgeous!

I enjoyed reading about your meeting new people and how you felt. I have experienced many of those same feelings and thoughts when anticipating making new acquaintances. Isn't it interesting to know that probably most of us feel that way. We all want to be accepted for who we are. With that said, I'll turn the post over to you!

First, let me say, thank you, Janet, for having me!

Sufficient Encouragement is my tenth Pride and Prejudice variation and if you read my books in order of how I wrote them (which is not the same as their publication dates) you will probably see how I’ve grown as a writer. I don’t just mean in mechanics, although I think I have improved there (as well as hiring an editor). My story style has evolved. My earliest stories focused exclusively on Darcy and Elizabeth. In later stories, I added in Jane and Bingley scenes. As best friends of our dear couple, I felt like I knew them well.

In Sufficient Encouragement, minor characters play a role in Elizabeth and Darcy’s story. I feel like they’re the acquiantances of the story. The friends you know but don’t know very well. Meeting them or spending a lot of alone time with them can be nerve wracking. Often, the impression you have of them changes after you’ve spent more time together. Such is the case in my story. Mary, Georgiana, and even Caroline end up having more to them than meets the eye.

Sufficient Encouragement also has several original characters. They take such interesting roles in the story that I am giving them a series to continue! In the rest of the “When Love Blooms” series, Darcy and Elizabeth will continue to crop up, but it’s really an expansion of the P&P world.

Now, I know a lot of readers don’t particularly like minor character stories, and they like original characters probably even less. But isn’t that like meeting new people? It is better to not meet with people, whether acquaintances or first introductions, with prejudice? Is that not at the heart of Pride and Prejudice itself?

I consider this not just as a writer and a reader, but in my personal interactions. A few weeks ago, I visited Washington, D.C. and met Jane Austen Fan Fiction authors Zoe Burton, Pamela Lynne, Cat Gardiner and Victoria Kincaid. I have met Zoe in person once and talk with her, Pamela and Cat online frequently. We wanted to have a meet-up and DC was agreed upon. After learning we would be there, a reader approached the local JASNA branch and soon a panel on JAFF was formed. As Victoria is a DC Metro area local, we were pleased to have her included as well, although none of us knew her very well.

As you might guess, I have an active imagination. What is less likely for you to guess, is that I’m actually an introvert. I like people and can talk openly with them, but then I need to pull back and have some time to myself.

The weeks leading up to this trip, I imagined a number of things. I imagined that the panel might go badly. The JASNA people might not like JAFF for not being scholarly enough. What if only four people would show up? I imagined what Cat and Pam would be like in person. I had never even seen a photograph of Victoria and had quite a bit of fun in my head imagining what she would look like.

Cat, Zoe and I were actually staying in the Pen Arts Building, run by the National Pen Women, of which Cat is a member. We had our own rooms, but would be sharing other spaces. Zoe and I were going to drive to DC and back. What if I was too weird? What if I annoyed my friends? What if I said the wrong thing? What if they said the wrong thing? They are loads of fun online but what if they were different in person? Oh, and then there were readers from A Happy Assembly coming, and I knew them even less!

I attempted to keep an open mind with low expectations. Different strokes for different folks, I told myself. Maybe someone would clip their toe nails at the table. It wouldn’t be the end of the world. Nothing an adult could do would be more shocking than my kids, right?

Well, all my worries were for naught! Zoe, Cat, and Pamela were as darling in real life as they are online! Victoria looked nothing like what I imagined, which for some reason was very Gwyneth Paltrow as Emma-esque. Instead, Victoria has dark, curly hair and I didn’t see a devilish smile once. We all had so much fun talking JAFF and life together!

The JASNA panel was amazing. There were far, far more people than I expected. They were so friendly and open with us. All of them were interested in JAFF, most of them had already read many of us. After the panel, we had lunch with the A Happy Assembly members and it was so amazing to talk with them and discuss our favorite stories, adaptations and more. I feel energized just writing about all of it! And I’m happy to say there were no bad table manners, which is much more than I can say for my children.

So, dear readers, I hope you can keep an open mind and enjoy Sufficient Encouragement as well as the “When Love Blooms” series. Meeting new people and new characters doesn’t have to be met with dislike or cause anxiety, it can be an adventure you never thought possibe!

We are all fools in love…

Some say a lady’s imagination is very rapid. Such is the case when Elizabeth Bennet overhears that Mr. Fitzwilliam Darcy admires her eyes. She thinks nothing for herself, but immediately considers her dearest sister’s growing attachment to Mr. Darcy’s friend. If Elizabeth spurns such a wealthy—and proud—gentleman, he might do everything in his power to separate his friend from her sister.

Raised in a world of expectations and pedigree, Darcy knows Elizabeth Bennet can offer him nothing of material value. As his attraction for her grows, he becomes increasingly convinced his feelings are nonsensical. Still, he might forsake it all if only he had true encouragement.

Misunderstandings lead to betrayals, and the couple soon learns falling in love takes courage but staying in love requires forgiveness. Traversing from the groves of Hertfordshire to the drawing rooms of London to the complexity and danger of Luddite revolts in Yorkshire, Sufficient Encouragement follows Darcy and Elizabeth’s journey of love and forgiveness.

*This story contains a scene of nonexplicit sexual violence.

About the When Love Blooms Series

“Love is like a flower, for it is well worth the toil to cultivate it.” She shrugged her shoulders, “Love is beautiful.”

Take a stroll in the garden of love and enjoy the unique blooms of the intersecting lives of the Bennet, Darcy, Fitzwilliam, de Bourgh and Bingley families. Sufficient Encouragement follows Darcy and Elizabeth as they fight to save their love from an unexpected frost while Jane and Bingley’s love grows strong roots. The companion story, Renewed Hope, adds depth to the bouquet with the love stories of Darcy’s cousins and Miss Bingley. The third book in the series, Extraordinary Devotion, follows Darcy and Elizabeth’s marriage while their younger sisters experience a London Season.

Rose Fairbanks hears book characters talk in her head. They whisper to her of a time when the sun never set on the British Empire. More than having a love story for the ages, these characters face struggles inspired by historical events such as market crashes, Napoleon, embargoes, Luddites, the Year Without a Summer and more. Merging historical research with the timelessness of Jane Austen, Rose currently has ten Pride and Prejudice variations published with several releases planned for 2016 as well as an original Regency Romance series in the works.

Rose proudly admits her Darcy obsession and addictions to reading, chocolate, and sweet tea. Always in the mood for a healthy debate, she also dearly loves to laugh. Having completed a BA in history in 2008, she plans to complete her master’s studies...someday. At the moment, having a career combining her life-long interest in history and research with her love for Jane Austen and the Regency Era consumes all of her professional time. When not writing or reading, Rose runs after her two young children, ignores housework, and profusely thanks her husband for doing all the dishes and laundry. 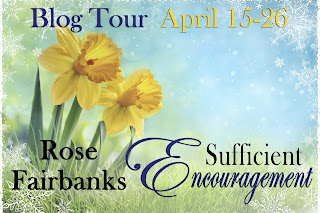 Thank you, Rose, for stopping by today. It has been a joy having you visit again and I wish you the best with Sufficient Encouragement. It sounds like a great book and I look forward to reading it soon!

Dear Readers, have any of you read it yet? What are your thoughts? If you haven't made a stop at the other blogs, be sure you do. There are giveaways, excerpts, reviews and other great posts. Don't miss out!
Posted by Janet T at 9:02 AM