Shadows Over Longbourn with Jann Rowland

Happy 1st Day of June to all you lovely readers! I hope you are having a good day. I have a special guest today and he is having a giveaway too. That will double your pleasure and make the day even better! Jann Rowland is the guest and this is his first visit to my blog. I am so happy to have him stop by as part of his blog tour for Shadows Over Longbourn. I have been reading good things about this book and I am excited he is offering an eBook as part of the post today. Thank you, Mr. Rowland, and welcome to More Agreeably Engaged.

Building a villain in the Pride and Prejudice universe can be a tricky business. Often it is tempting to use the characters created by Jane Austen as the antagonists, and though this is familiar to the readers, it can become stale. That is not to say that Mr. Wickham, Lady Catherine de Bourgh, Caroline Bingley, and even Mr. Collins are not fun to play with, to mold according to the needs of the story, and I also will not promise not to use them again in the future, though I hope I can always come up with interesting twists! But to fall on such a crutch exclusively is to ignore the potential inherent in the universe, in my opinion.

When I was planning my latest novel, Shadows Over Longbourn, all of the above characters would indeed make their appearance to bedevil and complicate the lives of our favorite characters. But it seemed to me that there was a unique opportunity to create a new villain, one who was mentioned by Jane Austen, but we only the see the effects of his life in the person of his son, William Collins.

At first it seemed to me that William Collins’s character could be altered somewhat and he could become my villain. What kind of havoc could a crafty and intelligent Mr. Collins wreak on our unsuspecting characters? But then, when I was researching some of the pertinent passages again, I came across a description for the elder Mr. Collins and my imagination took flight. Thus, Thaddeus Collins was born. (However, I retain the idea of doing a book featuring a very different William Collins sometime down the road!)

We are not told much of Mr. Collins senior. In describing Mr. William Collins, Jane Austen only says, “Mr. Collins was not a sensible man, and the deficiency of nature had been but little assisted by education or society; the greatest part of his life having been spent under the guidance of an illiterate and miserly father . . . The subjection in which his father had brought him up had given him originally great humility of manner . . .” Other than that one brief description, we are not even given a name! It was as close to a blank canvas on which to work as I had ever hoped to find in a character mentioned in a novel.

It was the terms “miserly” and “illiterate” that I latched onto when planning out the character. It was obvious that Mr. Collins the elder had not been kind to his son in Pride and Prejudice, if the comment about him gaining a great humility of manner was any indication. The first parts of Thaddeus Collins’s character were thus formed in my mind.

Mr. Collins and his cousin, Mr. Bennet, were engulfed in a disagreement for many years before the events of Pride and Prejudice. I took this one step further; I created a background which would explain why the surnames were different, then built the circumstances which led to the Collins family’s downfall from society. Mr. Bennet had only met Mr. Collins once in his life, and it was enough to inform him that his cousin would never be an adequate master of the estate should he ever inherit. The disagreement subsisting between the two men was centered around the fact that Mr. Bennet considered his cousin to be an uncouth, ill-mannered lout, while Mr. Collins blamed his Bennet ancestors for his family’s woes.

The question then became what form this enmity for his cousin—and consequently his cousin’s children—would take. For Thaddeus Collins, though a rough and illiterate man, was not stupid, and he surely realized that while his own progeny was not gifted with intellect, he could see that his cousin’s children were, in fact, beautiful young girls who would provide a much needed positive influence on his son, and provide him with children who would be an improvement. Mr. Collins considered his son to be a failure. This fixation with the Bennet girls would become an obsession which, though it ultimately failed with one sister, could easily be transferred to another. Add to these motivations a surly disposition, a cunning sort of crude intelligence, and a violent streak, and you have Mr. Thaddeus Collins.

Mr. Collins, though possessing a certain intelligence, has never been in a position to see to the livelihood of an estate, and as such, you can expect Longbourn to suffer under his stewardship. Mr. Bennet, though an indifferent manager and master, was at least familiar with what needed to be done, and educated after the manner of a gentleman of his time. Mr. Collins was not, and though he had a son who was educated to a certain extent, he was not inclined to listen to him, for Mr. Collins the elder actively disdained education, in spite of the assistance it provided him when his son was required to read letters to him or help him with his sums.

In thinking of my past works and the characters I have used as villains, I can honestly say that Mr. Thaddeus Collins is the worst. There is something particularly revolting about a man who would abuse his son, become enraged at the mere mention of his cousin, and make suggestive statements to Elizabeth. I will not spoil it, but it was almost nauseating to even write it. I hope you enjoyed hating Mr. Collins as much as I did!

The approaching death of Mr. Bennet threatens to leave his five young daughters at the mercy of the vengeful Mr. Thaddeus Collins. But Mr. Bennet plays one final desperate card before he passes, calling on his distant relatives—the Darcys—to provide his children with a home.

Removing themselves to Pemberley after their father’s death, the girls are protected by the estate’s current master, Mr. Fitzwilliam Darcy, who looks after them as conscientiously as he does his own sister.

When chance takes the Bennets and their Darcy relations to the estate leased by Mr. Bingley, little do they know that their father’s thwarting of Mr. Collins has only fanned the flames of his envy and hatred. He is determined to secure a Bennet daughter as a wife for his son, and he will stop at nothing to accomplish his goal.

Elizabeth has become consumed by love for Mr. Darcy, but since he remains oblivious to her feelings, Elizabeth’s desperation forces her to consider going into service as a governess, if only to obtain some distance from the object of her affection. But Mr. Collins has no intention of letting Elizabeth escape his grasp so easily, and everything finally comes to a head when he meets with her in an explosive showdown.

Jann Rowland is a Canadian writer. He enjoys reading and sports, and he also dabbles a little in music, taking pleasure in singing and playing the piano.

Though Jann did not start writing until his mid-twenties, writing has grown from a hobby to an all-consuming passion. His interest in Jane Austen stems from his university days when he took a class in which Pride and Prejudice was required reading. However, his first love is fantasy fiction, which he hopes to pursue writing in the future.

He now lives in Alberta with his wife of more than twenty years and his three children.
To connect with Jann, check out the following links


Amazon  This story is also available through KindleUnlimited
Goodreads 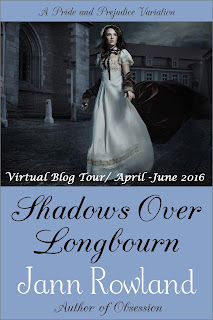 April 27/ Interview Post & Ebook Giveaway at Babblings of a Bookworm

May 5/ Book Review & Ebook Giveaway at Half Hope, Half Agony

May 26/Book Review & Ebook Giveaway at From Pemberley to Milton

May 30/ Book Review & Ebook Giveaway at Diary of an Eccentric

Jann Rowland, thank you for sharing how you built your character, Thaddeus Collins. I found your thought process and development intriguing and informative. Now, I am even more eager to read this book. I am wanting to know about the different last names! I feel quite confident that I will truly enjoy hating him much indeed! :)

I am thrilled that you allowed my blog to be a part of your blog tour. I have been all anticipation for your visit and I hope you will come back again someday in the future. By the way, your cover is very appealing.

Thank you also to Claudine Pepe of Just Jane 1813, for setting up the tour and making it so easy. I appreciate all your efforts and especially, for including me.

Now for the giveaway. There is one eBook of Shadows Over Longbourn up for grabs and this giveaway is international! Please be sure to leave me your contact info in the comment if I do not already have it. I want everyone that takes the time to tell us their thoughts, to have a chance at winning. I would like to hear what you think about this horrible sounding cousin, Thaddeus Collins. The giveaway will end at 11:59 PM on Tuesday, the 7th of June. Good luck to all.
Posted by Janet T at 10:02 AM