It is the time of year that I am busy working on my yearly Jane Austen Calendar. For 2017 the theme is Austen Men in Film + Two. The plus two being men portrayed in films from non-Austen novels. These two men will still be from two different period films and my hope is that you will be pleased with their addition to the calendar. As of yet, I have not made their identities public knowledge but will at a later date. I want to keep you in suspense! :)

There are quite a few participants again this year and even several authors that it is their first time to be a part of the calendar. I think you are all in for a treat, if the quotes I have been getting are any indication of the books being published. You will have the opportunity to read these quotes and see what books intrigue and tempt you.

The calendar will be released a little later this year than in the past two years. Since I am drawing all the pictures for each month, it takes me longer to get it all put together. Because of that, I will not be posting the drawings regularly on my blog. I will probably show several of them when it is closer to time for the calendar's release. I do have one drawing that I am going to share with you today. It is of an actor who played his part extremely well, as he did always. This drawing is my tribute to him for the many films in which he starred and the many roles he played making us truly love or hate his character. He did them all with class and with ease.

From Jane Austen's Sense & Sensibility, I give you my tribute to Alan Rickman as Colonel Brandon. 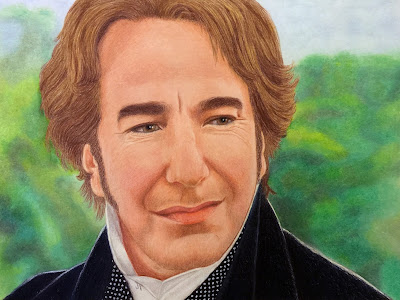 The other 'Austen Men in Film' are Edward Ferrars from Sense & Sensibility played by Dan Stevens, Captain Frederick Wentworth of Persuasion, played by Ciaran Hinds and Rupert Penry-Jones. Of course, there will be both Darcy's, Colin Firth and Matthew Macfadyen from Pride and Prejudice. I will include two Mr. Knightley's from Emma, Jonny Lee Miller and Jeremy Northam. J.J. Fields as Henry Tilney from Northanger Abbey and Blake Ritson as Edmund Bertram from Mansfield Park round out the ten Austen men.

If you think you may purchase a 2017 calendar, consider pre-ordering one. I am offering a pre-order price of $10. That is the same price I have had for the calendar for the past few years. After the calendar is released, the price will go up to $12 per calendar. I hate to increase the price, but my cost has continued to rise. Until now, I have not increased the price of the calendar to reflect those rising costs but feel I must this year. You can let me know by the contact form on this blog or by email if you want to pre-order a calendar. I should have the pre-order form on my website, JT Originals, within the next few weeks. Also, if you pre-order directly from me instead of the website, I can keep your shipping costs down some, too. That is a benefit, as well, since shipping costs continue to rise.

Let me know what you think of next year's theme. I would love to hear from you. Do you want to take a guess or two of who you think might be one or both of the plus two's? I'm working on one of them now and having a good time drawing him. :) I always have fun looking at the movies, pausing and photographing stills to use as my models for drawing. Then the real enjoyment comes when I start drawing them. I especially enjoyed drawing Alan Rickman and felt it an honor to do so. I wanted to share that with you, my dear readers.

I hope everyone has had a great weekend and will have a lovely week ahead. Take care and thanks for stopping by.
Posted by Janet T at 7:01 PM