The Many Lives of Fitzwilliam Darcy...Beau North & Brooke West 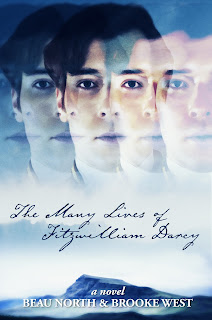 Beau North and Brooke West stop by today on their blog tour for The Many Lives of Fitzwilliam Darcy. I don't know about you, Dear Readers, but I am intrigued by this book. It sounds fascinating and a bit perplexing for dear Darcy! Don't think I would enjoy living the same day over and over! Well, there have been a few that I might like having a 'redo'! :)

The cover is fascinating and an excellent depiction for the premise! As many of you know, I'm all about the cover fitting the story! This one seems to do just that!

We are truly privileged today because the authors are sharing an exclusive vignette with us! Don't we feel special!? I hope you will enjoy this as much as I did! I adore vignettes! Thank you, thank you.

Our thanks to Janet and the readers at More Agreeably Engaged for the warm welcome on our blog tour! We have been so overwhelmed by the response so far and would like to take a moment to thank everyone who has followed the tour thus far.

When the idea of a vignette was suggested to us, we leapt at the opportunity. There is one character in particular we felt needed a bit more time in the sun (so to speak) and that was Colonel Fitzwilliam. In this book, Darcy truly finds himself in need of a steadying hand, and there is no one he trusts more than the colonel. In his predicament, Darcy is able to observe his friends and relations with a closer eye than they suspect, and it is revealed in time that Colonel Fitzwilliam may be harboring a secret of his own. We hope you enjoy this glimpse into his character!

The brandy poured smoothly despite the slight tremor in his hand. Colonel Fitzwilliam was not inexperienced in the ways of the world. He’d seen men torn apart by war—injuries to the mind that one might never recover from—but this time was different. Those men were soldiers, never his own family. He knew that Darcy had borne his fair share of suffering since the death of his father and in the unseemly business with Wickham, but Fitzwilliam never thought he would live to see the man so broken. It felt unnatural somehow, Darcy was the most stalwart person he knew.

With a deep breath, Fitzwilliam schooled his features into his usual, pleasantly affable mein before turning and handing a glass to Darcy.

“Here, take your medicine and there’s a good lad,” he commanded. Darcy’s own hand shook as he raised the glass to his lips and drank. Fitzwilliam observed there was still grass on his trousers from the scene in the park and suppressed a shudder at the memory of it. He refused to acknowledge Darcy’s claim that he had gone “quite mad.” Distressed, yes, but madness?

He had, of course, observed some unusual behavior from Darcy during this visit. It had not taken Fitzwilliam long to identify Miss Elizabeth Bennet as Darcy’s la belle mystère. When Darcy was not near her, he became sullen and distracted. When he was in her presence he was struck silent, watching her from a distance. Fitzwilliam’s suspicions were confirmed when Darcy delayed their return to London not once but twice. Only the most hopeless of love could keep Darcy at Rosings for such an extended visit. Not that Fitzwilliam had minded the delay so much. He’d had his own struggles to endure, temptations of his own to overcome. His nights became increasingly more restless, closing his eyes only to see a serious gaze from a pair of changeable grey eyes.

Damn and blast, man, that is not for you, he reminded himself once again. It had been some time since he had last visited Rosings as he’d been dispatched to Spain with his regiment the previous Easter. The year prior, an obligation to his father had kept him from Kent. When he’d arrived at Rosings Park with Darcy, it had been several years since he had set eyes on Anne. He remembered her as thin and sickly, but in the years since he had seen her last, she had blossomed into an elegant creature.

He never could have imagined the surprise he felt when she raised her eyes to his, sending a shock through him, followed by an ache he had only just begun to understand. It was a whisper in the dark, a beacon that became clearer as he mapped the paths of his own dutiful heart.

Perhaps the war had changed him, winnowing away his youthful indolence and allowing him to see what had always been in front of him. Anne de Bourgh was still quiet and reserved, but he’d seen flashes of humor and cunning when she thought herself unobserved. He knew her mind to be sharp and her opinions well-reasoned and steadfast. She would make an excellent mistress of Rosing Park one day and a superior wife to whatever fool was lucky enough to marry her. Fitzwilliam was certain now more than ever that it would not be Darcy, hopelessly smitten with Miss Elizabeth Bennet as he was. But he also knew that it could not be him, a penniless soldier and second son. His jaw flexed in silent frustration.

Shoving his own struggles aside, Fitzwilliam focused on his other cousin, the one currently in extreme distress. Once he had calmed somewhat, Darcy managed to recount a tale so fantastical that Fitzwilliam found himself caught up in it.

“. . . and that is how you find me in such a state now.” Darcy finished his story, staring morosely into his empty glass. Fitzwilliam paused before speaking, taking a moment to admire the rather stunning detail of the world that Darcy’s mind had created.

Fitzwilliam considered Darcy’s predicament before an idea struck him. And while he could not say that he believed his cousin’s tale, the light of hope in Darcy’s eyes as he explained his strategy was enough to make him want to try.

He did not know if Darcy was going mad or if his plan would meet with any success. He only knew that it was going to be a long night.

“He could no longer claim to be Fitzwilliam Darcy of Derbyshire, brother to Georgiana, master of Pemberley. In that moment, he was but a man. A man filled with more frustration than most souls could bear. A man torn asunder by his desperation, his fruitless dreams and desires.”

After Elizabeth Bennet rejects his marriage proposal, Fitzwilliam Darcy finds himself in the most unusual of circumstances. At first believing the extraordinary turn of events has granted him an inexplicable boon, he is eager to put the humiliating proposal behind him.

He soon discovers that he is trapped in the same waking dream with no end in sight and no possible escape. All that he holds dear—his name, his home, his love—remains ever out of reach. How will he find his way back to his normal life? Will one mistake haunt the rest of his days? It will take all of his fortitude to weather the storms of his strange new fate, and all of his courage to grasp the promise of his future. 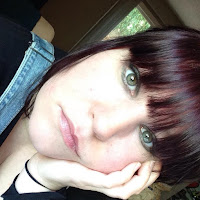 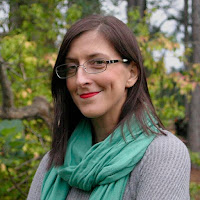 Beau North is the author of Longbourn’s Songbird and a contributor to the anthology Then Comes Winter. Beau is a native southerner who now calls Portland, Oregon home with her husband and two cats. She attended the University of South Carolina where she began a lifelong obsession with Literature. In her spare time, Beau is the brains behind Rhymes With Nerdy, a pop culture podcast and website, and a contributor at the San Francisco Book Review.

Brooke West is a contributing author to the anthology Then Comes Winter. Brooke has a naturally creative soul that pulls her into myriad artistic endeavors.  While writing fiction always has been her life's passion, Brooke also finds joy in silversmithing, sculpting, and costuming. Between projects, she runs and practices yoga.  She lives in South Carolina with her fiancé, son, and three cats.

After Fitzwilliam Darcy finds his suit rejected by the only woman in the world he would ever marry, he looks to make a quick exit out of Kent and go back to his life before he met Elizabeth Bennet. Yet, when he wakes the next day he discovers that getting back to everything he still holds dear may be more challenging than he ever imagined. What if finding his way back means getting another chance to win Elizabeth’s love?

Beau North and Brooke West, co-authors of Holiday Mix Tape from the Meryton Press winter anthology, Then Comes Winter, tour the blogosphere from October 8-October 19, 2016, to share their latest collaboration, The Many Lives of Fitzwilliam Darcy. Thirteen book bloggers, specializing in Austenesque fiction and romance stories, will share excerpts, guest posts, an exclusive interview with the authors and book reviews from this highly anticipated Austen-inspired novel. Four ebooks and four paperbacks are also being included in our giveaways and entry is available to anyone who participates in this blog tour.

Beau and Brooke are giving away 8 copies of their book, which includes 4 ebooks and 4 paperback copies. To win a paperback copy, the winners must have a U.S. mailing address. Be sure and check the Rafflecopter at the blogs with giveaways listed below.

For readers who wish to vote in our The Many Faces of Fitzwilliam Darcy contest, the choices are shown below:

A special 'thank you' goes to Claudine Pepe of Just Jane 1813. She does a fabulous job of organizing her blog tours. She makes it easy on us as bloggers. I do appreciate you, Claudine!

Thank you ladies for visiting my blog today. I am so happy to have you. It is a first for both of you to be here but I hope it certainly will not be the last visit for either. I appreciate the privilege of sharing your vignette with my readers. It is a great vignette and made me want to read even more. Again, I thank you, ladies, and I hope you have much success! It sounds like your book is being wonderfully received from all I have been reading! Congratulations!
Posted by Janet T at 10:08 AM