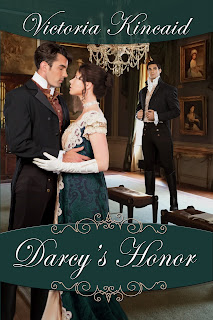 It is exciting today to have Victoria Kincaid visit More Agreeably Engaged. I always love it when she stops by because that means she has a new book out and we readers will be in for a treat! Thank you, Ms. Kincaid for writing stories that we love to read! Her latest, Darcy's Honor, sounds like it will not disappoint either. Below is a blurb and then we have an excerpt to enjoy! Thank you, Victoria Kincaid, for visiting and for sharing a bit from your book.

Readers, be sure and check out the giveaway! :)

Elizabeth Bennet is relieved when the difficult Mr. Darcy leaves the area after the Netherfield Ball. But she soon runs afoul of Lord Henry, a Viscount who thinks to force her into marrying him by slandering her name and ruining her reputation.  An outcast in Meryton, and even within her own family, Elizabeth has nobody to turn to and nowhere to go.

Darcy successfully resisted Elizabeth’s charms during his visit to Hertfordshire, but when he learns of her imminent ruin, he decides he must propose to save her from disaster.  However, Elizabeth is reluctant to tarnish Darcy’s name by association…and the viscount still wants her…

Can Darcy save his honor while also marrying the woman he loves?


The viscount pulled himself up to his full height, a few inches shorter than Darcy, and held out his hand to Elizabeth. “Elizabeth, come away. There are things we must discuss.”

“I have said everything that needs saying,” Elizabeth responded coolly.

The sound of her Christian name on the man’s lips made Darcy bristle. “You may speak in my presence,” he said.

Lord Henry made an irritated gesture. “She is my betrothed, Darcy. There are things we must discuss.”

Perhaps the viscount believed Elizabeth would not contradict him before witnesses. If so, he did not have a firm grasp on her character.

“I pray you, sir, remind me again when we became betrothed? I recall refusing your offer, and I am quite sure I have not told you otherwise.” Elizabeth’s eyes flashed as she spoke. “Do you remember our conversation differently?”

The sarcasm was not lost on Lord Henry. His face flushed even redder, and his lips were set in a thin line.

“I have found,” Darcy drawled, “that women usually know if they are betrothed.”

The viscount scowled at Elizabeth. “I do not believe you have a choice, my dear.”

“It is not the practice in England to force women into marriage,” Darcy said. “If Miss Bennet does not wish to be betrothed to you, she will not be.”

Lord Henry gave Darcy a disdainful look and then glared at Elizabeth. “You have no other options—after what has passed between us.”

Darcy’s insides curdled at these words. What had Elizabeth suffered? But he kept his face carefully blank.

Elizabeth frowned at the man, her hands balled into fists at her sides. “Nothing passed between us save some rather awkward compliments on my beauty and a very unappealing kiss.”

The viscount grimaced. “Nobody believes that was all! Your own family scoffed at the idea.”

It is interesting, Darcy thought, that when he is almost alone with Elizabeth, he does not bother to deny her assertion. Darcy folded his arms over his chest; perhaps that would prevent him from striking the other man. “I believe her,” he said forcefully.

Darcy continued, “In my experience, Miss Elizabeth has always been honest to a fault.” Elizabeth’s jaw dropped as he spoke; did she not expect him to come to her defense? “Further, I have too high an opinion of her judgment to believe she would willingly consort with you.”

The viscount was momentarily struck dumb at the insult. Another man might have challenged Darcy to a duel for such a slight, but Lord Henry was a coward. After a minute he regained control, straightening his shoulders with a sneer. “Now I see how it is, Darcy. You want her for yourself. I damaged the goods, and now you hope to purchase them at a reduced price.”

The callousness in the other man’s words made Darcy’s entire body tighten with anger. Surely Lord Henry did not believe that. Surely he did not regard Elizabeth as something to be bought and sold like a bolt of cloth in a milliner’s shop! Outrage stopped his throat.

“Well, I won’t have it!” Lord Henry declared. “I put forth the effort, and she is now mine for the taking.”

Darcy finally found his voice. “I do not have the aspirations to which you allude, sir.” His words were excruciatingly polite, but his tone was acid. He advanced on the other man, hoping to intimidate him into departing. “You have insulted me and this lady in every possible way. I suggest you mount your horse and leave before I am forced to take action!” Using his superior height to advantage, he loomed over the viscount, who backed away a few paces.

Lord Henry grasped his horse’s reins with a trembling hand, pointing a threatening finger at Darcy. “This is not over, Darcy! She is not yours to have. She is mine.”

Darcy was astonished at the sound of Elizabeth’s laughter. “And here I believed I belong to myself.” She tapped a thoughtful finger to her lips. “How in the world could I have been so mistaken?”

Well, folks, what do you think of that excerpt? Darcy's rush to help is 'so Darcy'! Elizabeth's reaction is true to her character as well. Lord Henry, I don't think I'm going to like him at all! What about the rest of you? Have any of you read it yet? I hope to read it soon! I have definitely had my interest piqued!

Now it's giveaway time! Ms. Kincaid is offering a paperback or eBook of Darcy' Honor, winner's choice and it's international!  Readers, the giveaway will end at 11:59 PM on the 30th of April. Leave a comment to be entered and please make sure I can reach you should you be the winner. Good luck to all and Happy Monday!

Ms. Kincaid, thank for the giveaway and for being my guest today. I have been following your blog stops and have enjoyed reading your posts and excerpts. Best wishes with this new release.
Posted by Janet T at 11:14 AM