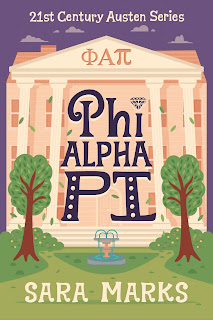 I'm delighted to have Sara Marks back for a visit. Sara first visited when her book, Modern Persuasion was released. She is here today with Phi Alpha Pi, a P&P modern story. She is sharing an excerpt and a wonderful giveaway.  Thank you, Sara, for stopping by today and best wishes with your new release!

I'd like to thank Lola from Lola's Blog Tours for organizing this blog tour and for inviting me to participate. The blog tour runs from May 14th through May 28th. Click the following link to the blog tour schedule.

Phi Alpha Pi is the oldest and largest sorority on campus and new president Lizbeth has a busy senior year ahead of her. She’s determined to keep her sorority in good standing on campus after a year on academic probation. She’s trying to manage the new sorority house manager, Mrs. C, who has her own ideas about how to support the sorority sisters. All while trying to find balance with her own academic goals to complete an honors thesis, graduate, and decide her future plans.

The last thing Lizbeth expects is her anger when Wil, a new member of the Alpha Pi fraternity, pushes every one of her buttons. Lizbeth finds Wil, a new transfer to the university with his best friend, to be rude, snobby, and judgmental. Even though she tries to avoid him, he seems to be everywhere, scowling with displeasure when he sees her.  That is, until his Thanksgiving proclamation of love.  That causes Lizbeth to reconsider how she sees the world.

You can find Phi Alpha Pi on Goodreads

Check out the first book in this series! Modern Persuasion
"Tension builds as they each learn about the current version of the person they once loved and resolve the ramifications of their choices." 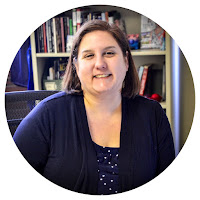 Born in Boston, MA and raised in Miami, FL, Sara Marks has two masters degrees and plans to never stop getting over educated.  She likes the idea of having all the academic regalia she can ever possess and winning with the most degrees in her family.  By day she's an academic librarian.  In what little free time she has, she also knits and plays with her dog Cedric Doggory.

One winner will win a Prize Pack containing:
- Mrs. C's homemade officers shirt in Comic Sans (you pick XL or XXL)
- A Phi Alpha Pi sorority sticker, candle, and bracelet (some of the items mentioned in the story).
- An illustration by cover designer Risa Rodil
- A rooster dishtowel (so you can make cock jokes with Lizbeth and Wil)
- Autographed printed copies of Modern Persuasion, A Little More Modern Persuasion, and Phi Alpha Pi (not pictured) 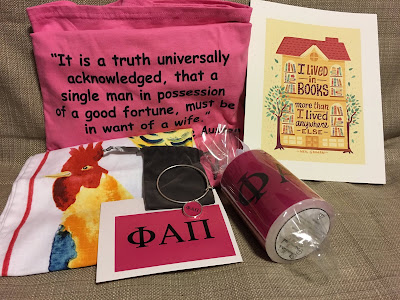 For a chance to win, enter the rafflecopter below:
a Rafflecopter giveaway

Open for all Giveaway

For a chance to win, enter the rafflecopter below:
a Rafflecopter giveaway

Sara Marks, I hope your blog tour is going great and that you are having a good time. Thank you again, for letting me be a part of it.
Posted by Janet T at 11:42 AM