My share in the conversation...A Quest for Mr. Darcy

Hello to everyone on this last day of June! Summer is here AND once again, my air conditioner stopped ! UGH! It is stifling. Send me some 'cool' (literally) thoughts. lol 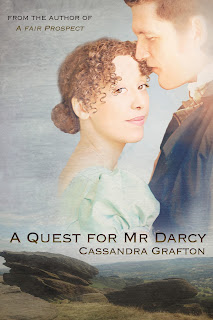 Today is my stop for the lovely Cass Grafton and her new release, A Quest for Mr. Darcy. I have the pleasure and honor of being the first blogger on the tour to review her book. Cass also has a fab giveaway so please take time to look at the lovely items and comment. Be sure I know how to reach you, too. You don't want to miss out on this wonderful prize!

Before I share my review, let's have a look at the blurb for A Quest for Mr. Darcy.


Fitzwilliam Darcy is on a quest. Convinced he is over his foolish infatuation with Elizabeth Bennet, he returns from a year of travelling with a plan, both to protect the estate of which he is guardian and to ensure his sister's happiness: he intends to do his duty and secure a wife at the earliest opportunity.

Duty; a path from which Darcy knows he should never have been diverted. Duty was safe and nothing would persuade him from it a second time.

Soon restored to his home in Derbyshire, Darcy puts his quest in motion, preparing to welcome guests from Town, one of whom is the suitably eligible young lady he has earmarked as his future wife.

But what of the Bennets of Longbourn? What befell them in Darcy’s absence from England? And what of the new tenants on his estate named Bennet? Is his path fated to cross with Elizabeth's once more?

With the addition of his friend, Bingley's, mischievous twin younger sisters, letters from a stranger and a shadowy figure lurking in the grounds of Pemberley, Darcy's life is about to be turned upside down.


Can he remain steady to his purpose, or will his carefully laid plans soon be in tatters as the rigid protection he has placed around his heart begins to falter?

Doesn't that sound excellent? Well, after reading the book that is exactly my opinion. Now for my share in the conversation... :)

A Quest for Mr. Darcy by Cass Grafton


When I heard that Cass Grafton had a new Regency era P&P work in progress, I was so excited. I absolutely love her writing style, her ability to delve into the minds and hearts of the characters and her talent to tell a captivating story. I was not disappointed. A Quest for Mr. Darcy lived up to my expectations and more. The standard set by the author in her series of books, A Fair Prospect, Volumes I, II and III was met with ease.

What if Darcy, along with Georgiana and her companion left for northern Europe shortly after the Hunsford proposal? What would happen to the Bennet family if Darcy had not been there to find Lydia after she ran off with Wickham, to save the family from disgrace? When Darcy returns a little over a year later, we, as readers, discover exactly what did happen with this one change in circumstance. Much is altered and the story that unfolds is gripping and entertaining.

When Bingley shows up shortly after Darcy’s return to London with a request of his old friend, they set off for Netherfield. Upon their arrival, they find nothing is as it was. Troubled and perplexed, Darcy is already beginning to realize he has not completely driven Elizabeth from his heart after all. The questions that this visit bring up get more mystifying with each new bit of information gleaned. Nobody knows where Mr. Bennet and his daughters are!

After Darcy returns to Pemberley, Mr. Bingley and his twin sisters make some stay with him. The twins, Viola and Olivia, are adorable. They are full of mischief and exactly the opposite of Louisa and Caroline. These two girls are genuine, and perceptive too! Quite often, they steal the show. How nice it was to have two Bingley girls that were fun and lovable!

Darcy has determined to marry to secure an heir and he has settled on an eligible young woman he feels is suitable to the task. Does he love her? No, but he feels he will never have the one woman of his dreams. Eleanor Latimer is everything his family, except for Georgiana, would wish for him. The Latimers are invited to visit Pemberley at the same time as Bingley, Olivia and Viola. Oh, the fun that ensues is hilarious.

Darcy encounters Lizzy early on in the story and what an encounter it is! Curiosity gets the better of him and he pays dearly. It is absolutely priceless! I laughed with glee when reading the passage. Darcy is still ever the gentleman but his shield of indifference is beginning to crumble.

There is angst, mystery, romance, suspense and fun. Several familiar names are in the script; Wentworth, Higgins, Thornton, and even Latimer, to name a few. I enjoyed these nods to different books and authors. It became a bit of a game to see who else I might find. Well done, Ms. Grafton.

I loved everything about this book. There is absolutely nothing that dissatisfies. After finishing the novel, I felt the warmth and gratification of a book well read. With the wonderful way that Cass Grafton writes, her beautifully flowing Regency ‘speak’, a surprising mystery or two, a story with feeling and depth,  and a wonderful ending with a few neat twists, this is a book anyone would fancy. I highly recommend it.

A fan of Jane Austen since her long-distant school days, Cassandra Grafton has been indulging her appetite for all things Austen for many years. Having long wanted to be a writer, she began publishing her endeavours in 2013. A Fair Prospect, a Pride & Prejudice-inspired Regency romance, was released in three volumes.
She then went on to be part of the co-writing team on The Darcy Brothers, another Austen-inspired historical novel, before settling down to co-write with one of her best friends.
The Particular Charm of Miss Jane Austen, a contemporary mystery/romance, was released in July 2016 under the names of Ada Bright and Cass Grafton.
A former college lecturer and PA, Cassandra has lived in three countries, and loves travelling, reading, cats and dry wine (and she combines most of these as often as she can!)
She has two grown up children and splits her time between Switzerland, where she lives with her husband, and England, where she lives with her characters.
She is a member of the Romance Novelists’ Association, the Society of Authors, the Jane Austen Society UK and is a founding member of the Jane Austen Society of Switzerland.

Where to find Cassandra Grafton:

Also available through Smashwords.com for all formats, including PDF:

For the giveaway, Cass Grafton is offering:

A book (eBook or paperback, winner's choice)
A set of 20 Jane Austen Bookplates
A JA silhouette badge
A P&P panel necklace
A set of P&P in 3 volumes. (The set is smaller than traditional book size, but not miniature and it does contain all the original text.)
All in an 'I'd rather be at Pemberley' tote bag 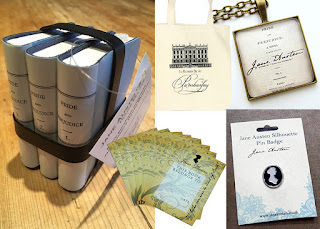 The giveaway is open internationally.

To be entered in the giveaway please your comment below. What do you think about Mr. Darcy's quest? We would love to hear your thoughts. Thank you, Cass Grafton for such a generous and lovely giveaway. Who wouldn't want to win all those goodies! Giveaway will end on the 6th of July at 11:59 PM. Good luck to all.

Thank you for considering my blog for your virtual tour, Cassandra. I'm thrilled to take part in promoting your book. As I have made abundantly clear, I love it! I have missed reading your Regency writings and I'm so glad that you gave us another story. I wish you much success with A Quest for Mr. Darcy.
Posted by Janet T at 8:27 PM