James W. Gaynor, author of Jane Austen's Pride & Prejudice in 61 Haiku, is my guest and I must say, I am fascinated with his book. Dare I admit this? I guess I might as well, so here goes. I have not been much familiar with Haiku! There! I said it! This post has been a learning experience and I have enjoyed it immensely. Thank you, James.

I love that James Gaynor has taken the opening lines of Pride & Prejudice and then written a Haiku for each. Of the ones that I have read, they are perfect. some are hilarious, and his process is intriguing. In this post he shares two different opening lines and the corresponding Haiku with us. Was Jane Austen giving us an extra message in some or all of these 'first sentences'?

I must mention the cover of Mr. Gaynor's book.  This cover is eye-catching and I like it! :) The design features a peacock motif and pays homage to the first illustrated edition of P&P (Illustrated by Hugh Thomson). As many of you are aware, I love peacocks and the peacock edition of P&P. I paid homage to it myself a couple of years back. (Psst, Jim's giving a paperback away!)

I hope you all get as much enjoyment from reading this post as I did. It was neat learning how this book came into being. Rather than prattle on, I give the floor to James Gaynor.

Emily Dickinson once famously remarked that if she felt as though the top of her head were taken off, she knew she was reading poetry. And who hasn’t read “It is a truth universally acknowledged, …” and felt our heads explode?

In my work as a poet, I’ve long been fascinated by memorable opening and closing lines in classic novels. I believe that the sentences we often know by heart are, in fact, short, unacknowledged poems that get lost in the sentences, paragraphs and chapters that follow.

So, I decided I would create a series of poems based on my favorite novel-openings, and Jane Austen’s Pride and Prejudice seemed a logical place to start. I soon realized that the first line’s fame has, in a way, cast a shadow over all the other chapters’ first lines.
I began to wonder if the 61 chapter-opening lines of Pride and Prejudice could, in fact, be the basis for a series of haiku. If each sentence was a kind of short poem, why couldn’t it be “translated” into that short, classic form of Japanese poetry? There is something wonderful and powerful in the format. Children study their three-line format in grammar school (5 syllables / 7 syllables / 5 syllables) and, in my teaching experience, adults always seem to enjoy learning how to write them.

That’s how the book happened. I had no idea what I was going to do when I finished, but I had a strong sense that I was onto something interesting about Austen’s style and messaging.

Isolating Austen’s chapter-opening sentences led to more than one surprise for me. The classic haiku attempts to answer three questions:

When I started analyzing the beginning of Chapter 56, I saw something I had never before seen:

One morning, about a week after Bingley’s engagement with Jane had been formed, as he and the females of the family were sitting together in the dining-room, their attention was suddenly drawn to the window, by the sound of a carriage; and they perceived a chaise and four driving up the lawn.

Until I paid attention to the “Where?” of the chapter’s opening line, I had never fully appreciated that Lady Catherine’s enormous carriage --- powered by four horses carrying a groom, a driver, Lady Catherine and (probably) her daughter — arrives at Longbourn and drives up the lawn!  Not the drive, but the lawn. The damage to the turf must have been extensive, and more than likely took out a Bennet chicken or two — but of no concern to Lady C. “Shades of the guillotine,” as one of my academic readers wryly remarked.

Here’s the haiku:
Lady Catherine
was unwelcome everywhere.
That never stopped her.

My new awareness wasn’t limited to Lady Catherine’s aristocratic behavior. I recently spoke at New York’s Fordham University — and the students were very interested in the first line of Chapter 43:

Elizabeth, as they drove along, watched for the first appearance of Pemberley Woods with some perturbation; and when at length they turned in at the lodge, her spirits were in a high flutter.

Prior to studying the first lines, I hadn’t really noticed the use of the word “flutter.” Elizabeth Bennet, as we all know, is really not a flutterer. So, why now? Why the use of a word more commonly associated with Regency heroines falling in love and teetering on the edge of a swoon?

The answer, I think, is that Austen is giving us exactly that clue: Elizabeth has fallen in love. With Darcy as he is represented by his estate, the beloved order-created-from-chaos so near and dear to the late 18-century English ideal. She does not fall in romantic love with Darcy because he is handsome (we don’t really know what he looks like) — she falls in love with him because he has purpose. And, of course, a sizeable estate, but that is really secondary — and the haiku reflects this interpretation:

Pemberley produced
a flutter effect. Could this
be real (-estate) love?

After the lecture, one young woman told me the Jane Austen we discussed was exactly the voice she needed guiding her love life — which confirms for me that, 200 years after her death, Austen continues to exert her subtle influence. 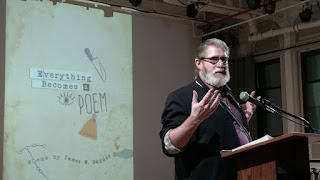 The book, Everything Becomes a Poem, the first book by James Gaynor
and illustrated by Kelly Duke McKinley, just won a national design award! Congratulations!

James W. Gaynor, author of Everything Becomes a Poem (Nemeton Press), is a poet, artist, editor, and writer. A graduate of Kenyon College, he lived for years in Paris, where he taught a course on Emily Dickinson at the University of Paris, studied the development of the psychological novel in 17th century France, and worked as a translator. After returning to New York, Gaynor worked as an editor at Grosset & Dunlap, Cuisine magazine, Scriptwriter News and Forbes Publications. His articles, book reviews, poems and essays have appeared in The New York Observer, OTVmagazine.com, The Gay and Lesbian Review Worldwide, and Peeking Cat Poetry Magazine. As #HaikuJim, Gaynor publishes a daily haiku drawn from current newspaper headlines and is the creator of Can You Haiku? — a corporate communications workshop based on using 17th-century Japanese poetry techniques to improve effective use of today’s digital platforms. Gaynor recently retired as the Global Verbal Identity Leader for Ernst & Young LLP. www.jameswgaynor.com 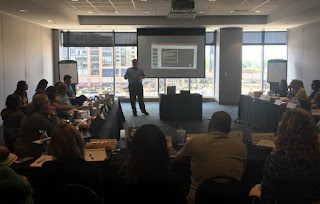 Above: Photo of James Gaynor leading corporate haiku workshop (for Ernst & Young in Cleveland)
It is out of the ordinary. Poetry. Who knew? :)

It has been such a pleasure having you stop by, Jim.  I love meeting new authors and having first time guests and I thank you for being one of them. It's been great having you share Haiku with me and my readers. Learning something new and enjoying it, at the same time is a treat.

I read your interview by Rita at From Pemberley to Milton and found it enlightening and interesting. When she asked you what readers could expect from your book, your answer was especially touching and made an impression, especially the part I put in bold type.


It’s my hope that readers will find themselves smiling knowingly from time to time as they travel in this redesigned Japanese vehicle across Austen’s familiar English landscape — and that they will forgive my star-struck attempt at what is essentially one long love-letter-poem written to the extraordinary woman who still speaks to us in such modern ways.

Tuesday I was visiting with Jan Hahn via the telephone.  Jan is doing a proof of my 2018 calendar and we were going over some of the quotes. When she read the Haiku, one, in particular, Jan laughed out loud, and not just a little. Believe me when I tell you that is a rare thing! This Haiku is one of the month quotes for December and is amusing. Jan loved it and so did I. But, Dear Readers, I'm not going to tell you what it is! *evil laugh* I will tell you that James W. Gaynor and his book, Jane Austen's Pride & Prejudice in 61 Haiku is one of the featured ads and quotes inside the calendar. Shameless, aren't I!


Moving on...I have some good news to share. Jim will have an audiobook in January --- a Cambridge scholar read the P&P sentences, and Jim recorded the haiku. Won't that be fun? I can't wait.

Jim is offering one paperback copy of Jane Austen's Pride & Prejudice in 61 Haiku to one of you and this giveaway is international. Leave us a comment and tell us what you think about Haiku. Are you familiar with it? I would love for you to have your share in the conversation but don't forget to give me a way to reach you should you be the lucky winner! Giveaway ends the 20th of November at midnight. Good luck everyone. 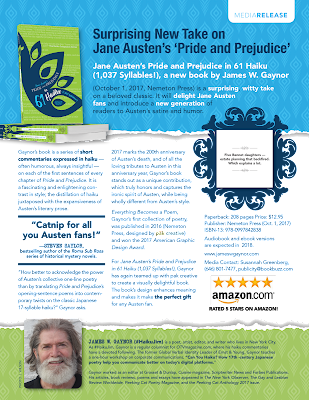