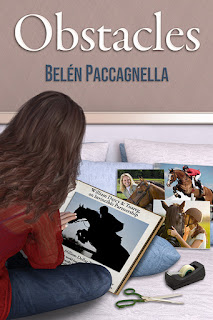 I'm thrilled to be a part of the Obstacles Blog Tour and have Belén Paccagnella, Meryton Press's newest author, visit More Agreeably Engaged. Belén already has quite a following in the fan world. She posted her stories at A Happy Assembly and was much loved. After reading her book, I can see why. I hope you get a chance to read it soon. It captured my attention from the first page!

Belén is answering some questions for us today. I'm sure you will find her answers as interesting as I did. If you would like to ask a question yourself, please leave it in the comments below. Without further ado, I give you Belén Paccagnella!

Belén, as a new JAFF author, I am sure you have a lot to share with us about your love for Austen and the steps you took from going from aspiring writer to a published writer. Would you share with us some of your background and tell us about the person behind this story.

I was born in Buenos Aires, which is Argentina’s capital. There was a brief period in my youth where my family moved to Brazil, and I attended high school there, in the city of Curitiba. My family owned a farm outside of the city, where we had cows, horses, and other animals. This helped shape the foundation of my love for horses, as well as rural life. I have a grown-up daughter and I’m still working full time.


My love for Jane Austen began when I saw the movie Sense and Sensibility. I didn’t initially know the author of the book, but I fell in love with the story as well as the characters and the portrayal of English society in Regency times. Then I watched the 1995 Pride and Prejudice adaptation, which took my obsession to a whole new level! After re-watching the series over and over again, I found several fanfiction sites and read everything that was published on the boards, both stories set in Regency and modern times. It wasn’t long before I started imagining my own stories until one day I gathered the courage to post my first piece. Although I studied in a bilingual school, I was quite insecure about my English at the time, so I was very apprehensive about posting my stories. I was lucky that everyone was so kind and encouraging and welcomed my stories, despite their flaws.


Please share with us the premise of your new release, “Obstacles,” including what helped you decide to publish this story.


The story was originally written in 2002 and then revised and re-posted a couple of times. I knew that several authors were pulling their stories from these sites and publishing them, so one day I decided to do the same thing.  I occasionally received emails from readers asking about the story and even received emails telling me that they would buy my story if I ever decided to publish it, but, for one reason or another, I never took that final step. For many years, publishing was just a dream I always had, but wasn’t sure I would ever fulfill. Then, in 2016, everything changed. I had breast cancer and when all of my treatment was over, I made the decision to finally become a published author. I contacted the lovely ladies at Meryton Press, and here I am, publishing my story.


I love the idea of a story set in the world of competitive horse jumping. How did you get to become so knowledgeable about this sport and what led you to write a “Pride & Prejudice” story within this setting?


I used to ride a lot in my youth (on the farm), I took riding lessons, and I attempted some jumping, but I never really competed beyond the novice level. Yet, I absolutely loved the sport, so I went to every show near my home, and I watched every tournament I happened upon on TV.  My knowledge about international competition was a bit limited when I started writing the story, so I did a lot of research and talked to friends who were involved in grand prix tournaments. It’s much easier now; you can find everything online—from interviews with top riders to how they fly the horses for the Olympics—but at the time, and especially in my country, information was scarce.


Choosing this setting was a no-brainer. Growing up among horses and going to riding clubs gave me a fairly good idea of how this world worked. People with resources owned the best horses, and paid to take lessons with the most exclusive teachers, while the rest of us took our lessons on the club’s old horses. As an enthusiastic 12-year-old, I didn’t care if the horse I was riding was one-eyed, but many years later, I understood the differences and applied them to my story.   Show-jumping is a highly competitive sport, as well as one of the most expensive and exclusive ones. Now it’s a huge industry, but it’s still a practice associated with wealth and aristocracy. Therefore, I thought it was the perfect backdrop for a Pride & Prejudice adaptation.


As a writer of a modern JAFF story, why do you believe Austen’s characters and themes resonate so well within a modern-day setting?


Austen novels are very character driven, and most of their conflicts are timeless and can be easily adapted to modern times.


Was your entry into Jane Austen Fan Fiction as a reader, and if so, how do you find JAFF stories that you’re interested in reading?


I’m the kind of reader that either gets hooked and won’t leave the book until I finish it, or I just drop it at the third page if the plot doesn’t interest me. If it’s well written and the characters are interesting, I’ll read it. Also, when I like an author, I read all their stories because I know I won’t be disappointed. Since I’ve been away from the boards and published JAFF for some time, I have a lot to catch up right now.

I loved imagining the character that I would cast in the role as the “England’s Hottest Horseman,” which is a nickname for the Darcy character in your story. Do you have any actors in mind who you would cast in this role?


Originally, Darcy was based on a gorgeous picture of Olivier Martinez I found online. Now he looks a lot like Tom Ellis.


I can certainly see Tom Ellis as Darcy! Click on the two names above and it will take you to a Bing page full of each man! :) What do you think? Okay, back to the interview since we must move on, what can readers do to support your work and stay in touch with you?


I love to have feedback from my readers! I used to post my stories chapter by chapter, and one of the things I liked most about that process was to read the comments made by readers and their interpretations about how a certain scene developed. They were so passionate and sometimes their analysis of the situation surprised me, because I didn’t think of it from that perspective. It’s very rewarding. Even now, many years later, I still receive emails from people who read my stories, asking me when I’m going to publish them. Readers can reach me at my personal email: bpacca2000@yahoo.com.


Thank you for stopping by to visit with my readers and good luck with the new release!


Thank you for having me and for all you are doing to support fan fiction and fan-fiction writers.


Book Description:
Not all obstacles are restricted to the show-jumping arena… Though Elizabeth Bennet lives an uneventful life instructing young equestrians at Longbourn, the family farm, she dreams of winning a show-jumping competition on Liddy, her spirited mare. But her life is upended when a team of world-renowned riders arrives at Netherfield, the neighbouring estate, and uses it as their training headquarters. As she assists the newcomers and their prize-winning mounts, she meets William Darcy, a wealthy and arrogant—albeit talented—rider with Olympic aspirations. He first insults and then ignores Elizabeth, and her feelings teeter between disgust at his hauteur and admiration for his equestrian prowess. As she discovers first-hand the rigors of a world for the elite, will Elizabeth change her perspective about love, trust, and the foibles of her own family?

Originally known as “Obstacles to Overcome,” Obstacles pays homage to Pride and Prejudice in the highly competitive world of equestrian show jumping.
Biography:
Born in Buenos Aires, Argentina, Belén Paccagnella discovered the world of Jane
Austen fan fiction after watching the 1995 BBC miniseries of Pride and Prejudice.
In her teens, she lived in Brazil when her family moved to the city of Curitiba due
to her father’s work. She moved back to Buenos Aires a few years later, where she
studied agronomy but finally pursued a different career and started working
in the development administration of shopping centres.

In 2001, she started writing both Regency and modern stories adapted from the
Pride and Prejudice storyline, merging drama, humour, and adventure while creating
characters with unique traits.

Belén still lives in the suburbs of Buenos Aires, where she shares her home with her
daughter and her pets while spending her time working, reading, and writing.


Terms and Conditions:
Readers may enter the drawing by tweeting once a day and daily commenting on a blog post or a review that has a giveaway attached for the tour. Entrants must provide the name of the blog where they commented. If an entrant does not do so, that entry will be disqualified.

One winner per contest. Each winner will be randomly selected by Rafflecopter and the giveaway is international.

Thank you, to Meryton Press, for the awesome giveaway, and to Claudine Pepe, for organizing the blog tour. I'm happy to have been included. Belén, I wish you much success with your new release.
Posted by Janet T at 8:45 AM