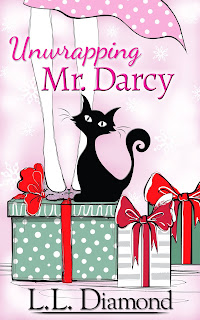 I have been looking forward with anticipation to today's post. L. L. Diamond is my guest and she is Unwrapping Mr. Darcy! Isn't that lovely! Not only that, we get to see her exquisite cover, fabulous giveaway, and the adorable Grunt once again. Thank you, Leslie, for visiting my blog and sharing a delightful excerpt today. It is a pleasure to have you here. Thanks, Leslie, and welcome.

Hello! Thanks, Janet, for having me today! I’m thrilled with the reception everyone is giving Unwrapping Mr. Darcy. Tomorrow is finally release day and I can’t wait for everyone to get their own copy. In the meantime, I have an excerpt for you. I hope you enjoy it! 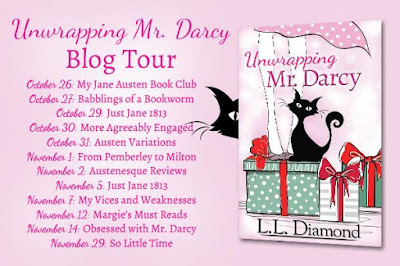 If you have missed any of the stops on this fun blog tour, be sure and take a look at the schedule above. There are still more opportunities to visit and learn more about the Unwrapping Mr. Darcy. Have you been reading some of the posted chapters at Austen Variations? I have and am loving it. If you have missed them, click on this link. It will take you to the prologue and you can follow through Chapter 3. The book is available for preorder at Amazon and will be delivered to your Kindle tomorrow, October 31st, with the paperback following on November 2nd. 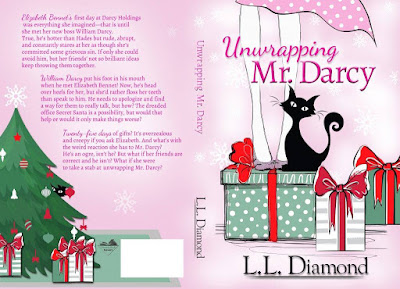 Thanks for stopping by, Leslie. I'm proud to be a part of your blog tour. As I said, I've enjoyed each bit of story that you share, and your cover makes me smile every time I look at it. It is adorable, and the story is such fun. I love your Secret Santa in this story. Have many of you, Dear Readers, worked or had a group with a Secret Santa? I have and thought it was fun. I never had one like Lizzy though! Oh my! :)

Leslis has an awesome giveaway. Christmas will come early for one lucky reader. Be sure to enter the Rafflecopter giveaway at the end of the post. You just might be the lucky one! It's beginning to look a lot like Christmas... 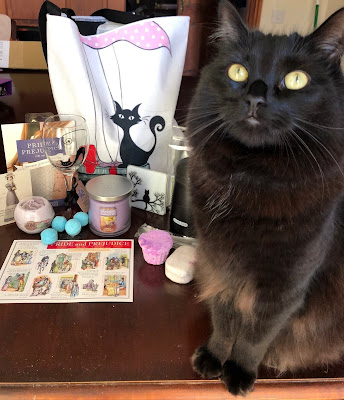 Isn't Grunt cute! I love how he sits there looking so innocent and protective of the goodies. He poses well.

a Rafflecopter giveaway
Posted by Janet T at 9:20 AM