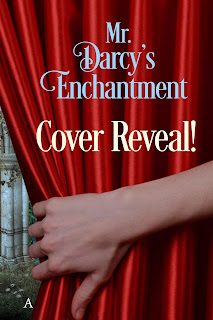 Dear Readers, you are in for such a treat today! Not only is Abigail Reynolds my guest for the first time, we get to reveal the cover for her new book, Mr. Darcy's Enchantment! Isn't that awesome! You are going to love this cover! It is absolutely beautiful, and I'm honored to host Abigail and her cover reveal today. Before the unveiling, let's take a look at the blurb.


By the way, if you haven't had a chance to read Chapter Two, it posted on my blog Monday. Abigail's blog was down so she posted here. Be sure to follow the link and read Chapter Two.


In a Regency England where magic and faeries are real…


Fitzwilliam Darcy is a powerful magician who controls fire, water, and wind. What he cannot control is his growing feelings for Miss Elizabeth Bennet.


Elizabeth’s sentiments towards Darcy are quite different. She detests his arrogance, and she fears he will expose her use of forbidden magic - forbidden to women, that is. He is the last man in the world she would choose to help her on a difficult and dangerous task.


But when a magical war looms between the land of Faerie and their world, a Lord of Faerie demands that Darcy and Elizabeth serve together as his emissaries to make peace with the other mortals. That mission throws them into the middle of a chaotic power struggle between magicians whose power dwarfs their own, and everything Elizabeth has ever believed about her family, her friends, and her enemies will be called into question.

Doesn't this sound good? I can't wait to read it. How about you? I'll turn the floor over to Abigail Reynolds and let her tell you a bit about the cover.

I was worried about what to put on the cover of Mr. Darcy’s Enchantment the entire time I was writing it. I wanted the cover to clearly indicate that the book is both Regency and fantasy. I used every search term I could think of on stock photo sites trying to find an image that would work for the fantasy aspect – fairy, fay, Titania, sylph, dryad, fairyland, elf, and dozens of others. After spending hours and hours without success, I contacted my cover designer, Jane Dixon-Smith, and said that I thought I was going to need original artwork for this cover because I couldn’t find any pictures to suit it. Instead, she told me the secret password, which was to search the sites for ‘wood nymph.’ Lo and behold, within an hour I’d found more images than I could ever use! Jane made a gorgeous cover out of one of them. It’s my favorite of all the covers I’ve ever had! I love the way Elizabeth and the dryad reflect each other, with the mortal world on one side and Faerie on the other, and how even the shape of their dresses is a mirror image. I also loved a different stock photo that looked like Titania, but it would have been too busy to put her in, too.


Thanks so much, Janet, for hosting me for the cover reveal!

It was my pleasure. Are you ready to show this beauty? Let's do it! 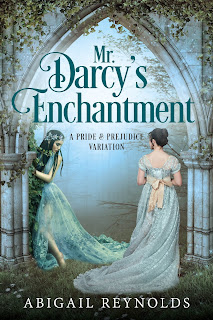 What do you think? Isn't it gorgeous! The colors, the pictures, everything is enchanting! I love it. Jane Dixon-Smith outdid herself on this one. Congratulations to both of you. Now let's take a look at the full jacket. 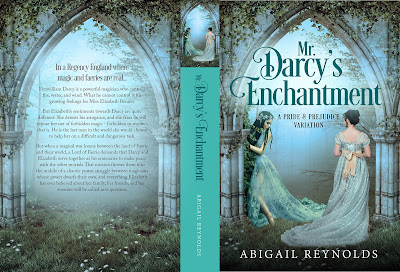 Stunning! I love the small front cover pic at the top of the spine. It brings the front and back together while allowing the reader to see the front when the book is on the bookshelf. I'm a cover junkie and can't help it, but I don't think I'm alone. How many of you study a cover? Does a cover ever encourage you to buy a book or do you go more by the blurb and what you know of the author's writing? I think all play an important part in the original appeal of a book, and Mr. Darcy's Enchantment certainly is appealing on all accounts.

Since I mentioned the author's writing, here's a short bio telling us more about Abigail Reynolds and when she began writing.

Abigail Reynolds may be a nationally bestselling author and a physician, but she can't follow a straight line with a ruler. Originally from upstate New York, she studied Russian and theater at Bryn Mawr College and marine biology at the Marine Biological Laboratory in Woods Hole. After a stint in performing arts administration, she decided to attend medical school, and took up writing as a hobby during her years as a physician in private practice.

A life-long lover of Jane Austen's novels, Abigail began writing variations on Pride & Prejudice in 2001, then expanded her repertoire to include a series of novels set on her beloved Cape Cod. Her most recent releases are Conceit & Concealment, the national bestsellers Alone with Mr. Darcy and Mr. Darcy’s Noble Connections, and Mr. Darcy's Journey. Her books have been translated into five languages. A lifetime member of JASNA, she lives on Cape Cod with her husband, her son and a menagerie of animals. Her hobbies do not include sleeping or cleaning her house.


Thank you again, Abigail, for the privilege of hosting your cover reveal. Yes, I've "gushed"I' but as you know, I was thrilled! I'd been admiring the pictures that were being posted on social media, and was quite fascinated with the premise of your book. It was fun to see the cover and more fun to reveal it today. I know you must be extremely proud to have this lovely wrapper surrounding your latest "baby." I'm glad to have you here at More Agreeably Engaged and share it with everyone. Please come back anytime and best wishes on Mr. Darcy's Enchantment. I believe the book is due to be released on December 4th.

Once again, Dear Readers, if you have not yet read Chapter Two of Mr. Darcy's Enchantment, you can find it here.
Posted by Janet T at 8:02 AM