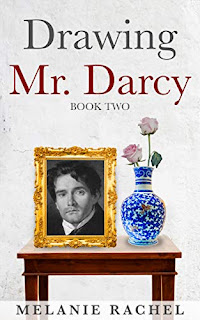 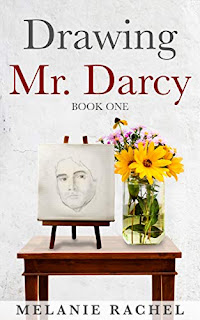 Hello to everyone. Melanie Rachel and I have been trying to have her visit since September. We kept having problems arise for both of us, but today she is here and I couldn't be more pleased. Melanie has recently released two book, Drawing Mr. Darcy: Sketching His Character, Book 2, and Drawing Mr. Darcy: A Faithful Portrait, Book 2.  She's receiving some really good reviews for both books. I look forward to reading both myself.

Melanie is going to tell us about Building a Different Wickham. I hope you'll enjoy her thoughts and tell us what you think.


In the few years I’ve been reading and writing JAFF, I have enjoyed writing about Elizabeth and the Bennets, about Darcy, Georgiana, Bingley, and Colonel Fitzwilliam. I even have written a rather large role for Mr. Gardiner in my modern, Headstrong (still in revisions). But I have never really liked working with the character of Wickham.


I have difficulty with Wickham perhaps because I have long seen this character as a sociopath (according to the Mayo Clinic, the technical diagnosis is Antisocial Personality Disorder). The canon character is not violent, at least not within the confines of the story, but then, most sociopaths are not. While I was considering the character for Drawing Mr. Darcy, though, I had to consider how the altered circumstances of the story might change such a man. In the story, Elizabeth’s great-aunt and uncle Russell adopt her, and while the separation from the other Bennets is bittersweet, in the end, nearly all the main characters in the story benefit from the change in one way or another. I thought it might be interesting if at least one character, Wickham, in particular, did not benefit, although he had been given every chance to become a success. In fact, what might happen if his character was twisted into something even worse?


The Mayo Clinic lists the following as among the symptoms of Antisocial Personality Disorder:


Disregard for right and wrong; Persistent lying or deceit to exploit others; Using charm or wit to manipulate others for personal gain or personal pleasure; Arrogance, a sense of superiority and being extremely opinionated; Recurring problems with the law, including criminal behavior; Repeatedly violating the rights of others through intimidation and dishonesty; Impulsiveness or failure to plan ahead; Lack of empathy for others and lack of remorse about harming others; Unnecessary risk-taking or dangerous behavior with no regard for the safety of self or others; Poor or abusive relationships; Failure to consider the negative consequences of behavior or learn from them; Being consistently irresponsible and repeatedly failing to fulfill work or financial obligations


Given this is the way I viewed his character, I thought a good deal about how to use Wickham in Drawing Mr. Darcy.


In Book One: Sketching His Character, the Russells finally open George Darcy’s eyes to Wickham’s poor behavior. As a result, he is shipped off to a position as a private secretary in the south of England when he returns from Cambridge. Upon the elder Mr. Darcy’s death a few years later, Wickham travels to London from Devonshire, still fully expecting to have been remembered in his godfather’s will. His hopes turn to anger when he discovers he will realize no financial gain from his godfather’s passing, and he threatens Darcy before he leaves. At this point, I thought, it would not be unusual for Wickham to add another symptom of a sociopath to the long list above, that of “Hostility, significant irritability, agitation, aggression or violence.”


Wickham still makes an attempt to elope with Georgiana from Ramsgate and is foiled—but he does not join the militia in Meryton. This is a George Wickham who has the benefit of both the money he has earned and the money he has skimmed from his employer’s accounts, so there is no need for him to seek employment in that way. Instead, in Book Two: A Faithful Portrait, he seeks a final settling of accounts before he plans to leave England forever. In his arrogance, he takes on a task that is perhaps too ambitious, but that doesn’t mean he can’t cause a great deal of damage along the way.


I won’t give you any more spoilers, but instead offer an excerpt from Book Two, a conversation about Wickham between Elizabeth and her aunt (one of the few times we leave either Elizabeth or Darcy’s POV). I hope you enjoy it!


Olivia waved a hand at her. “There are times when polite language will not do the job. This is one of those times.”


Lizzy slid her hand under Olivia’s where it rested on the sheet. “Evidently you and Uncle Phillip knew him?”


“He was George Darcy’s godson, and George favored him.” Olivia said with a sigh. “He preferred him, in many ways, to his own son.”


“What do you mean, preferred him?” Lizzy asked, indignant. “To Fitzwilliam?”


Olivia sighed. “Sometimes,” she said, “it is easier to bestow love on a child to whom you do not have any true duty. George treated young Wickham as he might have treated a second son, and I believe the boy considered himself as holding that position.”


Lizzy gave her a hard, shrewd look. “So much so that he believed the line of inheritance would include him?”


Olivia sighed. That is probably just what he thought, and why not? “There is no telling what he expected,” was what she said out loud. “George did say how angry the boy was to be sent to work after Cambridge.”


Olivia reached over and traced the back of her hand along Lizzy’s cheek. “Young Wickham barely made it through university. He was intelligent enough, but lacked discipline, and he had certainly never been censured by your Mr. Darcy’s father. Phillip and I explained to George that the boy was a threat both to the maids in the house and to Fitzwilliam himself.”


“John mentioned an incident near the stables.”


Olivia nodded. “After the boys returned from Cambridge, George had a conference with his protégé. He asked what young Wickham’s plans were, now that he had completed his education.”


Olivia shook her head. “It was not. According to Phillip, Wickham was offered a position as a private secretary to a wealthy man in the south of Devonshire who had contacts in the Navy. He was an acquaintance of George’s. The salary was excellent. The work was plentiful but not difficult, and there was room for advancement. After some years, he might be recommended for a position at the Admiralty, at which point he could increase his income substantially.” She turned Lizzy’s hand and traced the girl’s palm with her thumb. “George felt he must do as much for the boy since he had promised his steward that he would see young Wickham well settled.”


“I assume he did not accept?” Lizzy asked.


Olivia frowned. “He asked George if he might instead be given three thousand pounds to study the law. According to Phillip, the boy thought he would cut a fine figure as a barrister.”


She watched Lizzy’s brow furrow and knew her clever niece had come to the same conclusion that George Darcy evidently had. He would have thrown the money away in short order and come back for more.


Olivia shook her head. “He had a reason for choosing Devonshire. London would not have suited his purpose.”


Lizzy pursed her lips. “It is nearly as far from Derbyshire as one can be and yet remain in England.”


“He wanted young Wickham far away from Fitzwilliam,” Olivia agreed. “And I believe we now know that he was right to arrange it.”
*****
Wow, what a place to leave us, Melanie! I enjoyed reading your excerpt. Now I need to find time to read your book and learn the rest of the story! Yes, the Mayo Clinic's list does sound much like someone we know and usually love to dislike!

Thank you, Melanie, for being my guest today. I'm glad we finally got it worked out for both of us! :) It was good to have you make a return visit. Both books are available on Amazon. (I'm directing to Melanie's author page on Amazon.)

It's giveaway time! That's always good to hear, isn't it! Melanie is giving away one book, reader's choice of any of her books. A paperback may be chosen or an eBook if the winner is domestic. If international, the winner will receive an eBook of their choice. Thanks to everyone for stopping by. Good luck to all. The giveaway will end at 11:59 P.M. December 17th.
Posted by Janet T at 11:23 AM