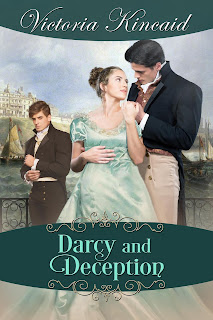 
Happy New Year, Janet, and thank you for having me as a guest!   Darcy and Deception has taken me longer to write than just about any of my other P&P variations—except the first, The Secrets of Darcy and Elizabeth.  I started to write it two years ago and just couldn’t get the plot to work.  But I returned to it in late 2018 and realized I needed to structure it more like a mystery novel (a genre I haven’t written in).  I also eliminated a plot point where Elizabeth gets engaged to Wickham (horrifying thought!) because it led the story off in the wrong direction.  I’m very pleased that my “Wickham as a spy” story finally made it into print, and I hope my readers will like it as well.  Please enjoy the excerpt below:


Returning home from Kent, Elizabeth Bennet is still distressed over Mr. Darcy’s insulting marriage proposal.  However, her attention is diverted by the local militia commander who asks her to observe Wickham, now suspected of being a French spy.  Pretending to be besotted with Wickham, Elizabeth accompanies the regiment when they relocate to Brighton.
Darcy arrives at Longbourn with the intention of making amends to Elizabeth, only to discover that she is now at Brighton with Wickham.  Desperate to save her from the scoundrel, Darcy follows her to the seaside, where he hopes to woo her away from the other man.
Deception piles on top of deception as Elizabeth attempts to carry out her mission without betraying confidences—or breaking Darcy’s heart.  However, the French plot runs deeper than she knows; soon she and Darcy are plunged into the confusing and dangerous world of international espionage.  Can Darcy and Elizabeth escape with their lives and their love intact?

“You must allow me to tell you how ardently I admire and love you.”


Those words had haunted Elizabeth’s dreams for a week.  All of Mr. Darcy’s words from that ill-fated night circled her mind like birds that refused to land, continuously intruding upon her thoughts.  But the declaration of love, in particular, pushed itself into her consciousness again and again, a most unwelcome visitor.


Many of his other words that day had been painful and had provoked anger.  Many she could dismiss as the result of his mistaken pride or his misapprehension of her character.  But he had declared his love in an eloquent and heartfelt—and apparently unforgettable—manner.  Those words could not easily be brushed aside or ignored.


The shock of Mr. Darcy’s declaration had not worn off completely.  At unrelated moments she would suddenly be struck with a recollection that the master of Pemberley had made her, Elizabeth Bennet, an offer of marriage.  Even now as she watched the scenery of Kent stream past her carriage window, she struggled to reassure herself that the event had indeed occurred.  It would be easier to comprehend the happening if she could speak with someone on the subject, but she had resolved to tell the story only to Jane.  Nobody else would have the requisite discretion and understanding.


If she told her father, he would be incredulous before considering it to be the occasion for a good many jokes.  Her mother would be in despair that Elizabeth had refused the offer.  Kitty and Lydia would perforce share the news with the entire population of Hertfordshire—which was also true of her mother, come to think of it.  Mary would moralize.


Only Jane will keep my confidence and will not laugh at my ignorance. Elizabeth willed the carriage to greater speed so that she might see her beloved sister all the sooner.  She arranged herself more comfortably against the carriage’s squabs and imagined the solace of Jane’s presence.   Her sister might also offer useful counsel.


Elizabeth could use some advice.  Reading Mr. Darcy’s letter had been a most unsettling experience.  She had thought Mr. Darcy a villain and Mr. Wickham a victim, but the letter had revealed how wrong she had been.  She had believed he disdained Jane’s match with Mr. Bingley because of her dowry when he had believed her sister to be indifferent to the man.  Likewise, Elizabeth had assumed he had observed her with disapproval and disdain when he had been viewing her with…longing.


Elizabeth closed her eyes briefly, still dismayed by the depth of her misapprehension.  She still struggled to ascertain her own sentiments about the man.  When Mr. Darcy had spoken in Hunsford, she had been horrified, but now…she knew that much of her dislike was based upon false information….


How did she feel about Mr. Darcy?  Believing he held disdain for her, she had felt the same for him.  But knowing he loved her…could she love him?


He was handsome, well spoken, and certainly eligible.  They enjoyed lively conversations, and their tastes in books and music were surprisingly harmonious.  But he was proud and difficult.  Was he not?


If only she could see him with new eyes!  More than once Elizabeth wished she could conjure him from the air so she might judge him with improved understanding.  Perhaps she could have developed tender feelings for the man under other circumstances.


Elizabeth shook off this thought and gazed out of the window to distract herself, spying a stream and a patch of wildflowers that had just burst into bloom.  How lovely. Yes, she would think upon these sights and ignore any thoughts about Mr. Darcy.


After all, her misjudgment of the man hardly signified.  Their paths were not likely to cross again—at least in the near future.  Perhaps in ten or fifteen years they might meet by accident when they were both married to other people.

Thank you for visiting, Victoria. It is always such a pleasure to have you stop by. I must say, I have been intrigued by this new story of yours. You always seem to come up with a new twist and I like that. I look forward to seeing what you "have up your sleeve" next. I think you have another winner with Darcy and Deception and I hope to post my review of the book in the future. I truly enjoyed reading it.
Victoria is giving away one eBook to one lucky winner.  Leave a comment to enter. Tell us what you think of Wickham as a spy. What do you think about Elizabeth pretending to be besotted with Wickham? What will Darcy think? Oh, my! That does pose a serious problem, doesn't it! You will love the Darcy in this book. He is quite the romantic!
The giveaway will end at 11:59 P.M. on the 29th of January. Be sure I can reach you should you be the winner. Good luck to all!
Posted by Janet T at 9:32 AM