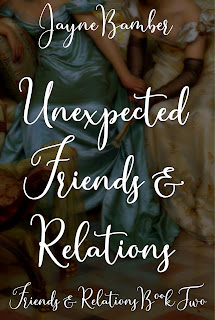 This is the week for new to my blog authors. Jayne Bamber, author of Unexpected Friends & Relations, visits today. This book is the second in her series about Friends and Relations.  Jayne is talking to us about the gentleman in her release, and it is quite interesting and delightful. I know you are going to enjoy this post. There is also an excerpt and a giveaway so be sure to join in the fun!

Volume 2 of the Friends & Relations Series is here! To celebrate the new release, I’d like to share a few hints with you of what you can anticipate in this continuation. Volume 1 focused largely on Elizabeth & Darcy’s relationship, but this volume is of a broader scope, and focuses on several heroines and smaller characters. I made a post last week about the ladies in the story, because female friendship and sisterhood play such a large role in the tale, but now I would like to talk about the gentlemen in Unexpected.

#10 After appearing in Volume 1 as the audacious flirt every lady needs in her life, the original character Henry Audley returns to push his luck and flirt with ladies and disaster alike.

#9 Handsome, charming, and fully aware of the fact, Mr. Elton delivers everything one might expect – pursuit of the unattainable, collateral damage along the way, and ultimately, exactly the kind of marriage he deserves.

#8 Frank Churchill, one of the more dubious heroes from Jane Austen’s Emma, appeared at the end of Volume 1 for just long enough to be scolded by Mr. Knightley at a ball, and convinced by Sidney Parker to bring his ailing aunt to Sanditon. That decision plays a key role in his development in Unexpected, which brings him to Highbury.

#7 After divorcing his scandalous first wife, Mr. Rushworth is thoroughly convinced that he is not looking for another, until he encounters a lady who shows him what he needs in a mate – in short, the opposite of Maria Bertram.

#6 This paragon of antisocial snark plays a background role with rippling effects through the story, after being dominated by the influence of his wife’s cousin, Lady Rebecca Fitzwilliam, and will likely be back for the third and final book.

#5 After meeting with some rather physical rejection from the widowed Marianne Brandon in Volume 1, Willoughby returns and meets with a lady who offers all the same charms as Marianne, as well as a friend with a plan to encourage romance all around...

#4 Ever the glutton for punishment, Captain Wentworth exchanges one complicated relationship for another. Acting only on suspicion that all is not as it seems for a lady of his acquaintance, Captain Wentworth leads them both to the brink of scandal, saved only by a miracle.

#3 Sidney Parker returns to fill everyone’s ears once more with talk of Sanditon, stirring up trouble in the process, until he finds an unlikely ally in matters of the heart, and a shot at redemption.

#2 What started as a chance meeting with Lady Rebecca in Volume 1 leads to more confrontation between the two of them in this volume, as Mr. Knightley struggles to ensure that all is well for his friends in Highbury.

#1  Arguably the best hero in all of Austen, Henry Tilney reads novels, understands muslin, and proves to have unexpected depths as he woos the lady who most deserves such a man, long after winning over her mother with his profound genius.

Honorable mentions….
Sir Walter Elliot makes an appearance as an undesirable suitor looking to find a wife to bear him an heir. Charles Bingley makes a tearful departure from the action of Volume 2, with a promise of return in the third and final book. Captain Fred Tilney and his father, General Tilney, make a brief appearance and the end of the tale, bringing relief to more than one character. Edmund Bertram visits London, braving Lady Catherine’s displeasure as he resigns his post at the Hunsford Parsonage, and receives in unexpected reward from an unlikely ally. Sir Gerald Sutton, Lady Catherine’s nearest neighbor plays a large part in the story, bringing hope to some, indulgence to many, and helping more than one lady find love.

Unexpected Friends & Relations is available now on Kindle, and the paperback version is coming soon, too. To enter the e-book giveaway, click here – winners will be announced on May 20th. Below is a little excerpt, depicting the first glance of recently-divorced Mr. Rushworth….

Thanks for joining me on this stop of my blog tour! See the full schedule for the blog tour below, and click here to follow me on Facebook for updates on the final installment of the Friends & Relations  Series, coming soon! 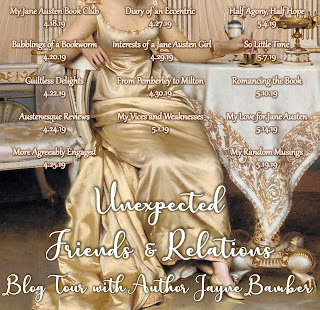 Thank you to Jayne Bamber for being my guest today and entertaining us with eye candy and the fun post about the ten things to expect involving the gentleman from Unexpected. I enjoyed reading along and I hope everyone else did too. What did you think of all those pictures? Neat, huh!

Don't forget the Ms. Bamber is giving away one eBook of Unexpected Friends & Relations. You will need to use the Rafflecopter to enter. Good luck to everyone.
Posted by Janet T at 11:29 AM