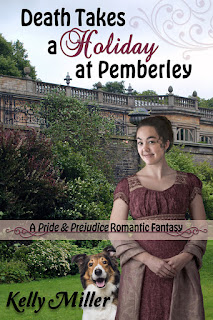 I'm so excited about my stop on Kelly's Miller's Death Takes a Holiday at Pemberley Blog Tour! Kelly is sharing an interview between Graham, the angel of death and Zoey Mills! I think you are going to have a good time reading this interview! Graham is quite a character, and he is quite fascinated with some "items" of the modern world! :)

Kelly Miller is a debut author at Meryton Press. She has written and posted several stories at A Happy Assembly but this is the first one she has published. Be watching for Kelly as she will be releasing another novel in early 2020. Welcome to More Agreeably Engaged, Kelly. I'm honored to have you visit.

If you haven't read the blurb yet, I will post it first: then the interview with Graham will follow. Enjoy!

What will the master of Pemberley do when confronted with the mercurial whims of an all-powerful angel?

Fitzwilliam Darcy's well-ordered life is about to become a chaotic nightmare. A man of fortune, property, and social prominence, he has everything he could desire. Blissfully married to his wife, Elizabeth, they have a two-year-old son. With so much to live for, Darcy is shaken by a near-fatal riding accident. After a miraculous escape, he is visited by an otherworldly being: an angel of death named Graham. Threatening dire consequences, Graham compels Darcy to guide him on a sojourn in the world of mortals.

Darcy immediately questions the angel’s motives when he demands to be a guest at Pemberley. Can he trust Graham's assurance that no harm will come to his wife and child? And why does Graham insist on spending time with Elizabeth? How can Darcy possibly protect his family from an angel with power over life and death?

In this romantic fantasy, the beloved couple from Jane Austen's Pride and Prejudice must contend with both human and unearthly challenges. Are the fates against them? Or will their extraordinary love conquer all?

On June 6, 2019, I had the privilege of conducting an interview with Mr. Graham, the mysterious angel of death and breakout star of the new romantic fantasy novel and Pride and Prejudice continuation by Kelly Miller, Death takes a Holiday at Pemberley.

Having read the novel, I could hardly contain my excitement when the scheduled interview with the Mr. Graham showed up on my calendar. Just as enigmatic as the angel himself was the way in which the interview was scheduled. To this day, I do not know who contacted the angel―no one in the office took the credit for having made the arrangements.

Mr. Graham had specified that the interview would take place at one of the newspaper’s remote offices at the edge of town. My crew and I arrived at the designated site early to set up the interview area with a variety of food and beverages. Mr. Graham’s arrival was precipitated by a dazzlingly brilliant flash of light, similar to a bolt of lightning, followed by a cloud of smoke. When the smoke cleared, and Mr. Graham came into view, my legs grew so weak and shaky, I had to grab a nearby chair to remain upright. I had known, of course, to expect an exceedingly handsome man, but I was unprepared for how very alluring he was. It took all my concentration to look away from him. It is impossible to describe his appearance in a way that does him justice. When I discussed the subject with my crew afterwards, we all thought he resembled our favorite movie actor—despite the fact that we all named a different actor as our favorite!

Eventually, I gathered myself and welcomed Mr. Graham to California and thanked him for coming. He had arrived precisely on time. The stunning, blond gentleman was dressed casually, in J Brand jeans, a Rodd & Gunn button-down shirt, and a black leather racing jacket. A dazzling smile was in place as he greeted me and heartily professed his pleasure in meeting me. My heart ran a wild race as I shook his hand. He was fascinating, gorgeous, and compelling. His hypnotic blue eyes beheld me with such warmth that I quite lost my breath and was unable to speak for a moment.

I recovered from my lapse by the quick thinking of my assistant, who pinched my arm. I introduced my crew to Mr. Graham, and then invited him to make himself comfortable on the sofa where I had a table set up for him with the refreshments. He peered with great interest at the food provided and asked me to identify the various food items. Then he proceeded to fix himself a heavily laden plate filled with avocado toast, fish tacos, and assorted doughnuts.

After filling and setting down his plate, Mr. Graham turned to the assortment of coffee and tea drinks we had picked up. He lifted one in his hand and stared at it with wide eyes--it was clear he was unfamiliar with drinks popular in the 21st century. At his inquiry, I explained that the drink he held was called a black-and-white mocha Frappuccino. Mr. Graham released a raucous laugh, before stating it was the most ridiculous-sounding name for a beverage he had ever heard. However, from his first sip, he declared it to be delicious and amazingly refreshing. He took similar enjoyment from the food items, and his favorites among the selections proved to be the doughnuts, especially the raised, glazed variety.

Before the interview started, Mr. Graham warned me that there would be a number of subjects that would be off limits. He proceeded to list all of the topics I was to avoid. When he was finished, I had to cross over half of my prepared questions off my list. What follows is the entirety of the interview.

Z Mills: Many people are unfamiliar with angels of death. What precisely does an angel of death do?

Mr. Graham: When mortals pass away, we attend them and ensure their souls are escorted to their designated locations. Alas, I am not at liberty to divulge the precise details of these final destinations. Suffice it to say that some people go on to more agreeable places than others. (He lifted another beverage from the table.) What do you call this beverage?

Z Mills: That is a hazelnut iced latte. During your sojourn at Pemberley, who took over your duties for you in your own world?

Mr. Graham: Hmm. This is very good too; I can taste the hazelnut! Anyway, there is a large crew of us who attend to this work. Because of all the wars you mortals continually get involved in, and the occasional natural disasters, we have found it necessary in our world to be prepared for many deaths to occur at once, and we have many more angels than we did when I was at Pemberley. However, even back then we had sufficient angels on hand to ensure no soul would go unescorted during my holiday.

Z Mills: Since your stay at Pemberley in 1815, have you taken other holidays with mortals?

Mr. Graham: I have not. Since then I have never observed an individual who so intrigued me that I was moved to leave my world again. Staying with Elizabeth, er, I meant Darcy and Elizabeth was a unique and unforgettable experience. On the other hand, I am not ruling it out. I never say never.

Z Mills: In Death Takes a Holiday at Pemberley, you demonstrated to Mr. Darcy a rather startling example of your powers. Do you have other powers, and can you tell me of them?

Mr. Graham: Yes, I have other powers, and no, I cannot tell you of them. Was that not one of the items I listed?

Mr. Graham: Well, I am sorry to be so cryptic, but we angels must have our secrets.

Z Mills: It is clear you are an aficionado of food and appear to be capable of eating far more than the average mortal. Do you ever gain weight?

Mr. Graham: No, I do not. You know, if you like, you may consider it to be a power that angels have on earth; no worry for ever gaining weight.

Z Mills: Are there other angels from your world who sometimes take vacations here on earth?

Mr. Graham: At any given time, angels are taking vacations all over the earth. I did it before it became popular, but now it is rather common in my world. (Mr. Graham stood) I am afraid it is time I took my leave now.

Z Mills: I thank you very much for stopping by and answering my questions. It was very nice of you.

Mr. Graham: It was a pleasure. I thank you for the delectable food and drink. Do you mind? (Mr. Graham picked up an old-fashioned glazed doughnut and a passion tea with raspberry syrup.)

Z Mills: Please, help yourself. You have a long trip back, I imagine.

Mr. Graham: (The angel’s cheeks became tinged with red) In truth, I will be back in a flash; I simply wanted to sample these.

Z Mills: You are most welcome to them. Good-bye, Mr. Graham.

Wasn't the interview delightful! What do you think of Graham? When you get a chance to read Ms. Miller's book, you will learn much about the angel of death. Why is he at Pemberley? What does he want?

Now get to know a little bit about Kelly Miller. She is a lovely lady. 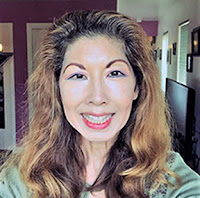 Kelly Miller discovered her appreciation for Jane Austen late in life, and her love of writing even later.  It was the 1995 miniseries of Pride and Prejudice that made her take notice and want to read the actual book.  It was many years later that she discovered the world of JAFF.  After reading a slew of wildly inventive stories featuring the beloved characters created by Jane Austen, she was inspired to write one of her own.  Now, writing is one of her favorite pastimes.  When not writing, she spends her free time singing, playing the piano, and working out.  (Yes, like Elizabeth Bennet, she is an excellent walker.)  Kelly Miller lives in Silicon Valley with her husband, daughter and their many pets. 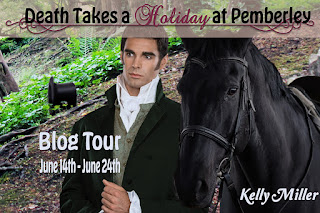 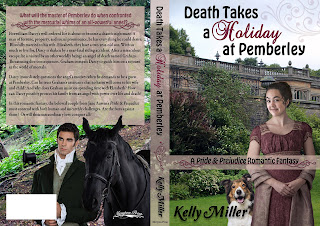 Meryton Press is giving away 8 eBooks of Death Takes a Holiday at Pemberley. The giveaway is international. Please enter with the Rafflecopter below.

a Rafflecopter giveaway
Posted by Janet T at 1:09 AM