The Journey Home to Pemberley...Joana Starnes

Welcome to More Agreeably Engaged, Joana. It's so exciting that you have a new release! The excerpts that you have been posting really made me want to read more! :) I've been anxiously awaiting your visit today and everything you have in store for us!

Dear Readers, Joana has written a special treat just for us. Aren't we lucky! It is lovely, but I will say no more for now, except...! OH MY! I swooned! I hope you enjoy it as much as I did.

Before we get to the vignette, let's take a look at the trailer.

Isn't it lovely! Wow! I keep watching it again and again. What do you think about it?

Do you want to know a little more about Joana Starnes?
Not only is she an excellent writer, she is also a lovely person.

Joana lives in the south of England with her family. Over the years, she has swapped several hats – physician, lecturer, clinical data analyst – but feels most comfortable in a bonnet. She has been living in Georgian England for decades in her imagination, and plans to continue in that vein till she lays hands on a time machine.

She is the author of eight Austen-inspired novels (From This Day Forward ~ The Darcys of Pemberley; The Subsequent Proposal; The Second Chance; The Falmouth Connection; The Unthinkable Triangle; Miss Darcy’s Companion; Mr Bennet’s Dutiful Daughter and The Darcy Legacy) and one of the contributors to the Quill Ink anthologies (The Darcy Monologues, Dangerous to Know, Rational Creatures and Yuletide). They are all available at Amazon in Kindle and paperback, and some in Audible too: Joana’s Amazon Page.

You can connect with Joana on:

Are you ready for the vignette? I am, so here you go! Enjoy!

Thank you, Janet, for welcoming me here today on the blog tour for my latest book, The Journey Home To Pemberley, which was released a few days ago.

I’ve been posting some excerpts at Austen Variations since the beginning of August, and there was another one in the cover reveal post at Austenesque Reviews last week. In those excerpts we see what Elizabeth is thinking and feeling (and how her thoughts and sentiments take her by surprise) when she finds herself tending to an injured and barely conscious Mr Darcy. But what – if anything – is he thinking at the time?

How about a vignette from Mr Darcy’s point of view? Please follow the links above if you’d like a quick reminder of just where we left our favourite couple – or rather how we left them 😊 – then pray read on:

It made no sense at all that he should be shivering uncontrollably while his mouth felt parched and his body was on fire. Wave after wave of fire and throbbing pain washed over him. Pain in his head? His body? He could not tell, nor did he care.

It made no sense either that he should hear her voice. Mr Darcy! Good heavens, Mr Darcy? Time and again he fancied he could hear this – now a shocked cry, now a barely audible whisper. Senseless fantasies, of course. The sound of her voice was but a forlorn echo in his imagination. Just as she was but a phantasm now – in equal measure a comfort and a torment. Nothing but a phantasm that came to him in dreams.

But that made no sense either. She had never called him Mr Darcy in his dreams.

Fogged with pain, his mind refused to grapple with the unsolvable conundrum. So Darcy allowed himself to drift into dizzying darkness, even as an intermittent cool sensation on his brow brought temporary comfort. Yet it also brought the aching wish to believe it was her healing touch that soothed him.

It could not be. And with that lucid thought, he sunk into oblivion.

The ice seemed to have lost its grip on him. It was melted – gone. But the heat had not subsided, and as it swirled and trapped him in its heavy folds, the dreamy haze around him acquired an increasingly poignant quality. For the treasured phantasm was still there, somewhere in the haze, almost as substantial as a physical presence.

He could have sworn he could detect her scent. Jasmine and gardenia. Her scent, and hers alone. He could have likewise sworn that the cool touch on his temple was hers. Hers too, the fingers that seemed to stroke his hair. And when he reached out blindly, searching blindly, he could have sworn it was her hand he found and clasped.

It slipped away, the phantasm’s hand, and he winced when the illusive succour vanished.

“Elizabeth…” he whispered in his dream, and at length the phantasm was willing to indulge him. He was permitted to feel the clasp of cool fingers yet again, and her voice, brought forth from the deepest recess of his memory, spoke the words he wished to hear. Spoke gentle words – as only a conjured phantasm would – urging him to rest and promising she would not leave him.

A dream, as always. It must be. Yet it felt more comforting than ever, and he could only pray he would not wake anytime soon and find the sweet illusion shattered.

She was but a phantasm, as he knew full well. But he answered her as if she were real:

As if her promise to remain beside him were something that he could depend upon.

The perfect dream had not vanished yet – extraordinary! – but recent recollections gradually emerged from the haze, as did faint wisps of sanity. He must have hit his head when the skittish beast, his uncle’s mount, had thrown him, Darcy reasoned. So now his addled mind was playing tricks on him. For, instead of signalling that he was lying in the rain by the side of the rough track, it sought to convince him that he was somewhere else. That he was abed – and safe – and warm.

Moreover, it insidiously laboured to persuade him that he was not alone. That she was beside him, her head resting on his shoulder. The warm weight felt impossibly real. So did her scent, as it invaded his senses.

He exhaled. Reality would eventually hit, no doubt, and the illusion would give way to loss. As always.

‘Reality be damned,’ Darcy hazily thought, and allowed his mind to foster the delusion for a little while longer. It was easily done – so easy to imagine that her head was on his shoulder. That her hair brushed his cheek as his chest rose and fell with every breath. He had even fooled himself into believing that the warm softness beneath his lips was her brow, when reality hit with far more force than he had expected.

There was someone with him in the darkness. The stranger jumped and gasped. And the high-pitched gasp was that of a female.

His senses abruptly jolted into alertness, Darcy sought to shuffle up as unmitigated horror washed over him. Surely he had not lost his mind to the point of taking some wench to his bed in a fever-induced haze – in the insane pretence that she was Elizabeth!

He had no recollection of any such debauchery, but that could hardly count as reassurance. His head pounded more fiercely than ever and his throat felt painfully raw as he rasped, “What the devil? Who goes there?”

“Sh-sh. All is well. ‘Tis I – Elizabeth,” the answer came at last in a faint whisper, and it brought no reassurance either.

Instead, the sense of loss swelled, mingled with no little anger at the disembodied voice that chose to mock him so. A sound escaped him, half sigh, half muffled snort.

What he heard next was a mild chuckle that might have fuelled his vexation, had it not been followed by a softly spoken, “Probably not.”

The air left his lungs in a shocked rush. He must be running stark raving mad if he was patently awake – and yet was still hearing things. Hearing her everywhere!

‘Say something else! Speak to me again!’ he wanted to cry out, yet all he managed was a hoarse, “Your voice! Who are you?”

“We need some light,” she said, and then there was light, as though she had willed it so. Blinding light. Exhilarating.

“Good God! It is you,” he choked out in a ragged whisper.

So what happens next?

They are alone – the best possible chance for them to talk uninterrupted. So they talk. About what? The Hunsford debacle, of course. Things must be said, apologies made – by both of them – and in Mr Darcy’s case the apology turns out to be forthright, if not very articulate. 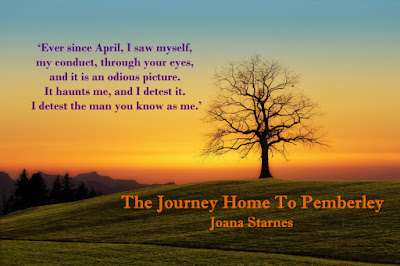 And where do they go from here?

I hope you will enjoy finding out.

Many thanks for stopping by to read the vignette. Please enter the Rafflecopter Giveaway for a chance to win one of the 8 Kindle copies of The Journey Home To Pemberley, or a paperback copy, or a P&P and Austen-related goodie bag. The Giveaway is international.

Best wishes, thanks for reading and thanks again, Janet, for hosting me today. It’s always such a pleasure to be here!

Thank you also for sharing this vignette with us. It was delightful! Swoon! Did I say that already? lol It was such a pleasure having you visit my blog again. Best wishes with The Journey Home to Pemberley. Please come back again soon. 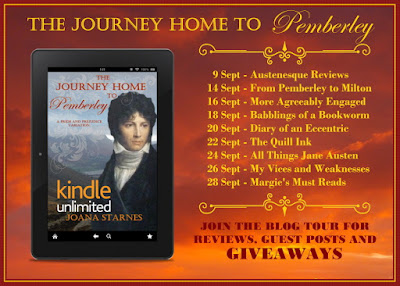 Thank you for such a generous giveaway, Joana! There are going to be some very lucky people!
Readers, to enter, please use the Rafflecopter below.
Don't forget to visit all the stops on the blog tour.

a Rafflecopter giveaway
Posted by Janet T at 12:09 AM