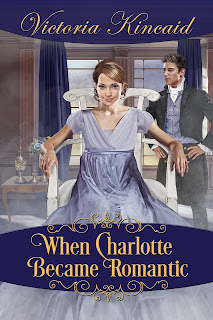 Victoria Kincaid is back for a visit with her latest release, When Charlotte Became Romantic. I, for one, am glad to see that Charlotte becomes romantic. I like that idea of having her feel real love. I'm curious to see what you do with this one, Victoria. I always enjoy your books, and I feel quite sure this will be no exception. I look forward to learning more about your Charlotte!

Dear Readers, there is an excerpt to follow and a giveaway for you! Yay!

Hi Janet.  Thank you for having me back to visit!  I am announcing the release of my latest book – When Charlotte Became Romantic.  It is the third in a series that I didn’t intend to write.  I just kept having ideas for books about some of the secondary characters in P&P (the previous ones were about Mary and Jane) and now I find myself with a series. 😊

I always felt that Charlotte ended up with the short end of the stick.  She’s so obviously smarter than her husband, but she’s stuck for the rest of her life not only listening to him but also to Lady Catherine.  I found myself wondering what Charlotte would do if she had another option available to her.  If she had feelings for another man would she admit it (to herself or to anyone else)?  If she had become engaged, would she break the rules of propriety to pursue her own happiness?  Would she allow herself to be romantic?

Below is an excerpt from near the beginning of the book—right after Charlotte has accepted Collins’s proposal.  Enjoy!

Desperate to escape her parents’ constant criticism, Charlotte has accepted a proposal from Mr. Collins despite recognizing his stupid and selfish nature.  But when a mysterious man from her past visits Meryton for the Christmas season, he arouses long-buried feelings and causes her to doubt her decision.
James Sinclair’s mistakes cost him a chance with Charlotte three years ago, and he is devastated to find her engaged to another man.  Honor demands that he step aside, but his heart will not allow him to leave Meryton. Their mutual attraction deepens; however, breaking an engagement is not a simple matter and scandal looms.  If they are to be happy, they must face her parents’ opposition, Lady Catherine’s disapproval, dangerous figures from James’s past...and Charlotte’s nagging feeling that maybe she should just marry Mr. Collins.
Charlotte had forsworn romance years ago; is it possible for her to become romantic again?

After their laughter had died down, her father sighed.  “I suppose you’ll be wanting to buy new wedding clothes.”
“Oh yes, my dear!” her mother exclaimed before Charlotte could reply.  “We cannot have our eldest marry looking like a pauper.”
Inwardly, Charlotte sighed with relief; she would not have to remake an older dress into a wedding gown.  For the past few years, Charlotte’s father had complained endlessly if they incurred any costs for new items in her wardrobe.  While her sisters bought lace from Belgium and silk smuggled from France, Charlotte had the maids remake her existing gowns.
At the balls, she knew the women of Meryton talked behind their hands about how plainly Sir William Lucas’s eldest daughter dressed, shaking their heads over how her simple fashions did nothing to ameliorate her plainness.  But begging for an increase in her wardrobe allowance had meant giving rise to yet another discussion about her failure to find a husband.
Surely Mr. Collins would not be as stingy as her father; hopefully new clothing would be a benefit of marriage.
Her father was still holding forth.  “I suppose not.  And we are bent on putting on a good show for Collins, eh?  He is a fine fellow.  A fine fellow!  Not as wealthy as some.  But he has good prospects.  And you have liked many a stupider fellow.”
This jab was like the thrust of a knife.  But having endured many such wounds over the years, Charlotte steeled herself not to react.
“And when he inherits…well…what joy shall then follow!”  Sir William’s eyes shone as he envisioned Charlotte and Mr. Collins happily ensconced at Longbourn.
She did not comment on her father’s eager anticipation of the death of one of his greatest friends.  “Why, that could be an occasion for a return to St. James!”  Her father clapped his hands together.  Sir William’s visit to St. James’s Palace had been the high point of his life, a story that was told and re-told countless times to everyone of his acquaintance.  Charlotte often wondered if a return to the palace could possibly live up to the recollection.
Her mother was unable to contain herself any further.  “He has good prospects indeed!  Someday Charlotte will be mistress of Longbourn.  Just imagine!” She clasped her hands over her bosom in rapture.
Of course, Mr. Collins’s inheritance was enticing to her parents.  While the Lucas family was more financially secure than the Bennets, Lady Lucas had always been envious of Longbourn.  There was no denying that the Bennets’ estate was larger, older, and grander than Lucas Lodge and its property.
“When do you think Mr. Bennet might die?” her mother mused.  “His father was one and seventy when he passed, but perhaps this Mr. Bennet may not be of such hearty stock.  And, of course, he might fall from his horse or eat a poisonous mushroom…”
Charlotte’s father nodded sagely.  “We can only hope.”
“Papa!” Charlotte objected, but nobody noticed her.
“And the first thing you must do is change the wallpaper in the south drawing room!” Lady Lucas instructed Charlotte.  “Whenever I visit for tea, I always think some kinds of hideous creatures are staring at me from the walls.” She shivered.  “Perhaps it is haunted.”
“The wallpaper is haunted?” Charlotte asked.
“Enough about wallpaper!” her father harrumphed, unhappy at being supplanted as the center of attention.  The women immediately fell silent.  “Since Charlotte grows older by the day, I was pleased to grant Mr. Collins permission to wed with all speed.  But he wishes to have the ceremony after the Christmas season.”
“Very well,” Charlotte responded, simultaneously relieved and disappointed.  Although she would never be prepared to marry Mr. Collins, she was eager to establish her own home.
“That will give us time to have a proper dress made,” her mother exclaimed rapturously.
Her father grunted.  “Not too much, if you please. He has already purchased the carriage, as it were; there is no need for the expense of repainting it.”  Laughing at his own joke, Sir William glared at the women until they laughed as well.
“I shall not spend too much,” Lady Lucas agreed.  “Why, there is little enough that a gown can do for the girl.”  She gave Charlotte a pitying look.  “Nothing can make her less plain.”
“Fortunately, her teeth are good, and she comes from excellent bloodlines,” her father added.
I might as well be a horse they are selling to a neighbor.  Would they offer Mr. Collins the chance to “put her through her paces”?

A Pride and Prejudice Variation

In the original Pride and Prejudice, Elizabeth Bennet’s friend, Charlotte Lucas marries the silly and obsequious clergyman, Mr. Collins.  But what if fate—and love—intervened?

Desperate to escape her parents’ constant criticism, Charlotte has accepted a proposal from Mr. Collins despite recognizing his stupid and selfish nature.  But when a mysterious man from her past visits Meryton for the Christmas season, he arouses long-buried feelings and causes her to doubt her decision.

James Sinclair’s mistakes cost him a chance with Charlotte three years ago, and he is devastated to find her engaged to another man.  Honor demands that he step aside, but his heart will not allow him to leave Meryton.  Their mutual attraction deepens; however, breaking an engagement is not a simple matter and scandal looms.  If they are to be happy, Charlotte and James must contend with her parents’ opposition, Lady Catherine’s nastiness, and dangerous figures from James’s past.

Charlotte had forsworn romance years ago; is it possible for her to become romantic again?

So what do you think so far? Have you read this book yet? Tell us some of your thoughts, if you have. I'm glad that the ceremony was not so quick! Not only will it give time to have a proper dress made, it will also give time for Charlotte to become romantic, right? I hope! :) I've always felt she deserved better than Mr. Collins and being under Lady Catherine's thumb. What a trial that had to be. To become mistress of Longbourn someday did have its positives, but that could be quite some time in the future. This romantic side of Charlotte will be interesting! Thanks, Victoria, for allowing us, as readers, to experience it with her.

There is an international giveaway of one eBook of When Charlotte Became Romantic. Leave a comment telling us your thoughts or answering any of the questions I've scattered in the post. We'd love for you to have your share of the conversation. The giveaway will end October 28th at midnight. Good luck to all.

Thanks again for stopping by Victoria Kincaid. We wish you well with this book in your unplanned series! :)
Posted by Janet T at 8:05 AM