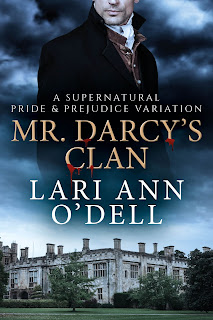 It is my pleasure to welcome for the first time to More Agreeable Engaged, Lari Ann O'Dell, author of Mr. Darcy's Clan. It is a story about vampires and Firstborn Sons in English society. Sophia Rose is giving us her early impressions of the story and will review it at a later date.

Before we read Sophia's impressions, let's take a look at the book description and get to know Lari Ann.

The upper echelon of English society—comprised of vampires, or Firstborn Sons—is a world Elizabeth Bennet has no desire to join. She has little exposure to Firstborn Sons until Mr. Bingley arrives in the neighborhood and falls in love with her sister Jane. His mysterious friend, Mr. Darcy, attracts Elizabeth’s attention, but she is convinced he is hiding a dark secret. In spite of this, powerful feelings draw her to him. She learns a shocking truth when Mr. Wickham appears, and disaster strikes at Netherfield. Forced into Mr. Darcy’s supernatural realm, a confusing new world of danger threatens their deepening love. How can they find eternal happiness when members of his illustrious clan are plotting her demise? Can Mr. Darcy rise beyond his past to save her or will he lose her for all eternity? 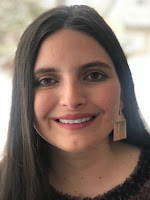 Lari Ann O'Dell first discovered her love of Pride & Prejudice when she was eighteen. After reading a Pride & Prejudice variation she found in a closing sale at a bookstore, she said, "This is what I want to do." She published her first novel, Mr. Darcy’s Kiss, two years later.

Born and raised in Colorado, she attended the University of Colorado in Boulder and earned a bachelor's degree in History and Creative Writing. After graduating college, she wrote and published her second novel, Mr. Darcy’s Ship. Her third novel, Mr. Darcy’s Clan, is her first supernatural variation, and she is working on two more fantasy variations. She is now back at school and pursuing a degree in Nursing. She adores her two beautiful nephews, Hudson and Dean. She currently works at a middle school and writes whenever she can.


*****
Are you ready to see what Sophia Rose has to say about Mr. Darcy's Clan? I am so I will turn this over to her. Thanks, Sophia Rose.


A Vampiric Pride and Prejudice?  My interest was piqued.  Mr. Darcy is just the sort of tall, brooding hero who would make a good vampire character and Elizabeth a feisty heroine whose courage would rise in the face of fangs and blood.

The book opened with a history of how England became a nation ruled by vampire royals and aristocrats and received the Dictates, a code of honor, to live by and hence an alternate history with a paranormal element joined with the familiar P&P storyline.

From the opening chapter, I encountered a curious new take on an old story.  Wealth and family are important to Mrs. Bennet, but having a daughter married to a First Son (vampire) and taken as an Eternal Mate (become his vampire wife) is her end game.  News of a rogue vampire who killed a neighbor barely registers before news of a First Son and his party arriving to take the lease of Netherfield Park puts them all in a dither.

Elizabeth is eager to meet the Netherfield party because they will, if nothing else, break up the monotony of things, but soon a snub from the rude and abrasive Mr. Darcy and the snobbish behavior of Mr. Bingley’s relations gets her back up.  Even still, she is drawn to Mr. Darcy and senses he is keeping a secret.

Darcy recognizes Elizabeth immediately as her blood Calls to him, but her lower position means she cannot be for him.  Or so he keeps telling himself.  It pains him to see her fall under Wickham’s Thrall and he won’t walk away now.

But, of course, the wicked Wickham is a vampire and doesn’t follow the Dictates and he has his dastardly gaze fixed on Elizabeth when he sees what she means to his old nemesis Darcy.

The table is set for a tension-filled supernatural conflict and romance.  I reluctantly stopped at the beginning of Part Two.  A heart has already been broken, an uneasy accord has begun, and a villain is ready to wreck havoc.  It has been fascinating to see the story alter to accommodate the paranormal worldbuilding and the swifter arrival of conflict and romantic development between the characters.


My curiosity is not assuaged and I am eager for more.

*****
Thank you, Sophia Rose! It is great to read your thoughts. You have given us much to think about, and now I want to know more. How about the rest of you? Are you ready to know more? If so, you can get the book here.

If you want to reach out to Lari Ann, you find her here: 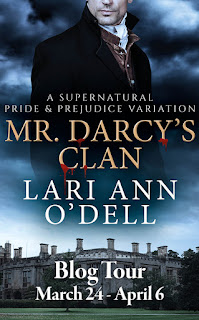 Have you been following the blog tour? If you have missed any stops or if you want to know where it is going in the next few days, please take a look at the schedule below. You can go to any stop from here.


Giveaway:
Lari Ann O'Dell is hosting a giveaway of 8 eBooks! That's right! Be sure to enter so you can have a chance to win Mr. Darcy's Clan. The giveaway is international.

a Rafflecopter giveaway
Posted by Janet T at 8:28 AM