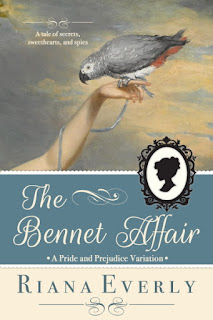 Riana Everly is stopping by with some interesting information on codes and cyphers. If you have been reading about her latest book, The Bennet Affair, you may have read that Darcy and Elizabeth encounter French spies, rumored to be led by Thomas Bennet. Oh my! This does sound intriguing. I love a good spy mystery. When it involves two of my favorite fictional characters, that makes it all the better!

If this is your first encounter with The Bennet Affair, let me give you some background. Let's start with the blurb. Later Riana shares an excerpt with you!

A tale of secrets, sweethearts, and spies!

Elizabeth Bennet’s bedroom in the ancient tower of Longbourn has always been her private haven. So what are those footsteps and shuffling noises she’s now hearing from the room above her head? Drawn from her bed one dark summer night, her clandestine investigations land her in the middle of what looks like a gang of French spies!

William Darcy’s summer has been awful so far, especially after barely rescuing his sister from a most injudicious elopement. Then he is attacked and almost killed nearly at his own front door in one of the best parts of London. Luckily his saviour and new friend, Lord Stanton, has a grand suggestion—recuperate in the countryside and help uncover the workings of a ring of French spies, rumoured to be led by none other than country squire Thomas Bennet!

Drawn together as they work to uncover the truth about the Frenchmen hiding in their midst, Elizabeth and Darcy must use all their intellect as they are confronted with an ingenious code machine, a variety of clockwork devices, ancient secrets and very modern traitors to the Crown. And somewhere along the line, they just might lose their hearts and discover true love—assuming they survive what they learn in the Bennet affair.

The Bennet Affair is a full-length JAFF novel of about 112, 000 words.

In The Bennet Affair, Lizzy and Darcy discover a machine that encrypts secret messages important to the ongoing war between England and France. They talk a lot about codes and cyphers, but the two words are not interchangeable. A code is a system where words, images, or numbers are substituted for words or phrases, and where one needs the key to break the code. These can be quite random and cannot be broken without the key. Think, for example, of a Chinese restaurant menu, where each item has a number. The only way you know that item 87 is the hot and sour soup is because the menu tells you that.

A cypher, on the other hand, changes the message on a letter-by-letter basis and does not imply meaning. A code book is not necessary, and cyphers can be broken with enough determination and effort. In other words, codes operate on semantics, or meaning, whereas cyphers operate on syntax, or symbols.

Here is a small selection of cyphers that are often used. 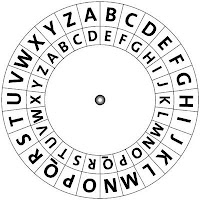 This is the first thing that Darcy and Lizzy tried, and it is one of the simplest encryption methods. It is a type of substitution cypher, where each letter of the original is replaced by another letter a certain pre-set distance ahead in the alphabet. If, for example, the parties have decided that A now is B, all letters A will be replaced by Bs, all Bs by Cs, etc. A variation of this is to start at the back of the alphabet and work forward, so each A becomes Z, each B becomes Y, and so on.

The Caesar cipher is named after Julius Caesar, who, according to Suetonius, used it with a shift of three (A becoming D when encrypting to protect messages of military significance. It is easy to use, but also easy to crack, and it succumbs readily to a brute force attack, where the decrypter just tries all 25 shifts of the alphabet.

First described by Giovan Battista Bellaso in 1553, this is a type of polyalphabetic cypher, where multiple alphabets are used to encrypt a message. It wasn’t until 1863 that Friedrich Kasiski published a general method of deciphering Vigenère cyphers.

The Vigenère cypher is the one that Lizzy cracked in our story, and it relies on a key word to enable the two sides to encrypt and decrypt the message. The machine gave our heroes the word GOLDFINCH as the keyword, which told them which letters substituted for which in the message. It is a series of Caesars, each with a different shift or offset. So for the first letter, you’d use a Caesar where A becomes G. For the second letter, A would become O, and for the third, A would become L, and so on until you finish the word, where you would simply return to the first letter of the key word.

The Jefferson Disc or Wheel Cipher 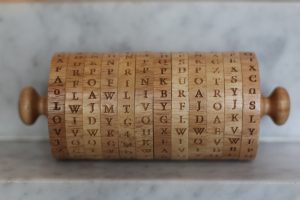 This is Thomas Jefferson’s invention, also known as the Bazeries Cylinder. It consists of a series of discs on a central rod, each with the scrambled letters of the alphabet printed or etched upon them. The discs are numbered and can be rearranged. The encrypter spells out a message on the discs, then rotates the entire cylinder to some degree, and writes down the nonsense letters now in front of him. The recipient arranges the discs on his cylinder in the identical order, which must be predetermined, and simply reverses the action, spelling out the nonsense and then rotating the entire cylinder until he sees a line that makes sense.

The Wheel Cipher was invented in 1795 but did not become well known, and was reinvented over a century later by Etienne Bazeries. The system was used by the United States Army from 1923 until 1942 as the M-94.

Why don’t you try your hand at a simple Ceasar cypher, where A becomes B.
J ipqf zpv bsf bmm tubzjoh tbgf boe xfmm. 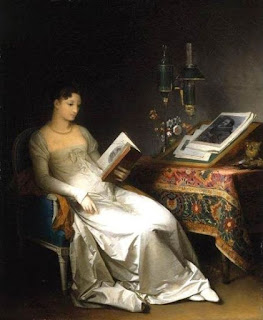 Richard placed a piece of paper on the kitchen table. It had a series of letters written across it in an untidy but tutored hand—Richard’s own, Darcy noticed. He must have copied only a small portion of the message text for their efforts.

“That makes no sense whatsoever,” Elizabeth chewed her bottom lip, and Darcy felt his eyes drawn to that spot and he fought the urge to reach across to her and pull her into his arms. Not now, not when you are out of sorts and needing comfort. Later, when you are under better regulation and you can ask the lady her thoughts on the matter. He pulled his eyes from her lip and sent them back to the nonsense on the paper.

“It is encrypted, Miss Elizabeth,” Richard teased. “If it made sense, our labours would not be needed.”

“Silly man!” she teased back. “Of course I knew that. I merely made a comment. Now, how is our word from the machine to relate to this string of letters?”

There was silence as all three contemplated the matter before them.

“The most obvious solution would be a Caesar cypher,” Richard offered. “It is a fairly simple cypher to break, but easy to encrypt and easy to translate back, if you know the offset.”

“Offset?” Elizabeth asked, but Darcy could see her mind working as surely as he had seen the workings of the mechanical horse he had purchased for her from Mr. Mendel. She would find for herself the meaning quickly enough without help, such was her intelligence. “Ah, I believe I have it. The offset is how far along the alphabet one need go in order to uncover the meaning. If the offset is B, then all As become Bs, all Bs become Cs, and so on.”

“Clever girl!” Richard beamed. Darcy sent him a scowl, but then turned his own smile upon the lady. She really was a clever young woman, with an understanding that transcended her middling education. She had determined in a moment what an offset cypher was, with little guidance.
“If we assume the first letter of our code word to be the offset, then all As become Gs, and so forth. Let us see what it tells us.” Richard found a pencil in his pocket and began to scratch at the paper.

“That cannot be correct.” She chewed at her lip again, and Darcy now wished to kiss it, lest she raise a welt or break the rosy surface of soft flesh.

“Neither did I expect it to be,” his cousin sighed. “That would be too simple, although with the encoded keyword, it was well worth the trying.

“Could it be one of the other letters?” Something was worrying at the back of Darcy’s mind, but it would not come to him. “Perhaps the offset is the O.”

Once more, Richard began working with his pencil.

What do you think? Is your interest piqued? Mine is!

Let's get to know Riana Everly. Do you have any questions for her? If you do, be sure to ask them in the comments below.

Riana Everly was born in South Africa, but has called Canada home since she was eight years old. She has a Master’s degree in Medieval Studies and is trained as a classical musician, specialising in Baroque and early Classical music. She first encountered Jane Austen when her father handed her a copy of Emma at age 11, and has never looked back.

Riana now lives in Toronto with her family. When she is not writing, she can often be found playing string quartets with friends, biking around the beautiful province of Ontario with her husband, trying to improve her photography, thinking about what to make for dinner, and, of course, reading!
Riana’s novels have received several awards and citations as favourite reads of the year, including two Jane Austen Awards and a Discovering Diamonds review.

Blog Tour
Here are my blog tour stops!
March 31 ~ Interests of a Jane Austen Girl
April 4 ~ My Love for Jane Austen
April 6  ~ From Pemberley to Milton
April 9 ~ Diary of an Eccentric
April 13 ~ Babblings of a Bookworm
April 15 ~ Half Agony, Half Hope
April 17 ~ More Agreeably Engaged
April 21 ~ So Little Time… So Much to Read
April 24 ~ Author Takeover at The Historical Fiction Club
May 8  ~ Austenesque Reviews

Thanks for stopping by, Riana. I loved your post about codes and cyphers.

It is always good to have you visit. You are welcome to stop by anytime, and I hope it will be again soon.
Posted by Janet T at 10:00 AM