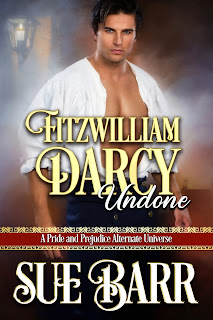 It is my pleasure to welcome back, Sue Barr, to More Agreeably Engaged. It is always so nice to have you visit, Sue. This new book, Fitzwilliam Darcy ~ Undone, sounds different and interesting. The excerpt you shared has me really curious. The descriptions give the scene such an ethereal quality. I look forward to reading more about this story.

I've rambled enough so now, let's turn this over to Sue.

What would Pride & Prejudice be like if Darcy and Elizabeth had a touch of magic in their lives?

Thank you, Janet, for hosting me today. This is last stop on the tour for Fitzwilliam Darcy ~ Undone and I’m thrilled to be here. As I’ve stated earlier, I’m humbled by how close the JAFF community is and how well they treat others as we stumble along in life. Truly amazing.

I’m not one to talk a lot about myself, I’d rather share who I am with my writing and even then, I don’t delve too far because my mind is a twisted, cavernous valley filled with shadow and light, highs and lows. Usually I write what I call ‘fluffy’ pieces, solely about romance and I’m a huge sucker for an ‘out of this world’ alpha male who knows what he wants and sets out to get it. Fortunately, it’s usually our feisty heroine who keeps him on his toes, and my latest novel, Elizabeth most definitely has Fitzwilliam unbalanced. Or should I say… Undone?

I hope you enjoy the following short excerpt.

“Do not leave me, Elizabeth.”

“Never. Now rest. We’ll discuss this in the morning.”

“What if morning never comes again.”

He heard her soft chuckle.

“Believe me, Fitzwilliam, we have all the time in the world right now.”

“I cannot bear for us to be apart.”

The bed dipped softly as she joined him and curled into his side on top of the counterpane. When he would have protested and begged her to crawl beneath the covers, she laid a hand on his chest and murmured, “Sleep.” When he awakened, the sound of crashing waves and the salty tang of the ocean teased his senses.

He opened his eyes and took in his surroundings. The room in which he lay was unlike anything he’d seen before. Floor to ceiling terrace doors opened wide, allowing fresh sea air to flow through the room. Wisps of almost translucent material for curtains fluttered in the breeze and beyond the window, a stone terrace. From there, he noted a strip of white sand sloping down to azure blue water which stretched as far as his eye could see. But what caused his heart to almost stutter to a stop was the sight of a slight woman standing on the pristine sand, her hair and skirts billowing out behind her like a glorious sail.

As though he’d called to her with his mind, she turned and flashed a brilliant smile. Pain free, he stood and moved to meet her on the terrace. Without any thought of propriety, or who may be in the area, he hauled her up against his chest and captured her mouth with his. She met his demands with her own and they remained locked together for minutes, hours, days. He had no concept of time except this exact moment with his Elizabeth.

“My love,” he murmured into her hair, holding her close to his chest. “I thought I’d lost you.”

She stepped out of his embrace and when he would have protested and dragged her back, she took his hand and tugged.

“We have much to discuss and we have all the time in the world to love each other.”

Take a look at this book blurb. It puts more questions in my mind.

She’s the outcast in her family…

Elizabeth knows she’s different from the rest of her family. She has visions and strange dreams and sees things others do not. With the advent of the odious Mr. Darcy and his friends from Netherfield Park, as well as the amiable Mr. Wickham of the _____shire Militia, her powers seem to increase and her greatest fear is that she won’t be able to contain them and will be discovered.

He has eight hundred years of tradition to uphold…

No Darcy has married a non-magical woman since arriving on the shores of England with William the Conqueror in 1066.  However, his kind – Miatharans – are dwindling in numbers. Miatharan magic only flows through aristocratic blood lines, so his strange obsession with Miss Elizabeth Bennet is puzzling as she is not of noble blood. Just a country squire’s beautiful daughter who has him slowly becoming undone.

Fitzwilliam Darcy ~ Undone is available in Kindle Unlimited (Amazon) until Dec 12 when it will be released to other major digital retailers.

‘The prairie dust is in my blood but no longer on my shoes.’

Although it’s been over forty-two years since Sue called Saskatchewan home, her roots to that straight-lined province and childhood friends run deep. The only thing strong enough to entice her to pack up and leave was love. When a handsome Air Force pilot met this small-town girl, he swept her off her feet and they embarked on a fantastic adventure which found them settled in beautiful Southwestern Ontario when hubby retired from the military and began his second career as an airline pilot.

Sue started writing in 2009 and sold her first manuscript in 2010. Always a reader of Regency romance, she discovered Jane Austen Fan Fiction in 2014 and almost immediately wanted to know – Whatever happened to Caroline Bingley after her brother and Mr. Darcy became engaged to a Bennet sister? From that question, her first JAFF book was launched.

In her spare time, Sue cans and preserves her own food, cooks almost everything from scratch and grows herbs to dehydrate. Her latest venture is to create her own spice seasonings, experiment with artisan breads and make her own homemade vanilla. Hubby has no complaints other than his jeans keep shrinking. At least that’s what he claims…. Her sons, their wives and all seven grandchildren don’t mind this slight obsession either. 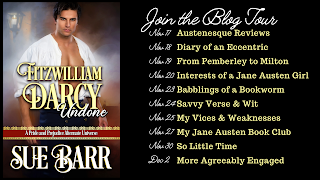 Thank you, Christina Boyd, for organizing the blog tour and for including my blog. It was great having Sue visit again.

Sue Barr, I wish you the best with your new release. Thank you for sharing the excerpt and a little about yourself. I enjoyed reading both. I've been seeing much about your book around the blogosphere and in social media. Since this is the last stop for your tour, I hope it has been a fun tour for you. Again best wishes with your book.

*Sue Barr will giveaway an ebook of this latest novel to 3 random winners for entire blog tour. Follow the tour and join in the comments to be entered to win. Sue will choose the random winners and announce the winners on social media on December 5.