It is an honor to have Linda Wells as my guest. She has painted some lovely pictures with words and it is amazing.  I like how you drew me in with your words and visuals. Thank you Linda, for such an interesting post. Be sure and check out the giveaway at the end of the post. You will not want to miss this one!

I was recently sitting on a hotel balcony, watching the sun rising over the Atlantic Ocean, and the phrase, “A picture is worth a thousand words,” came to mind.  That’s true enough, but not the best adage for a writer.  After all, my goal is the opposite, to paint a picture with words.  So, I went about mentally writing the scene playing out before me.

Gulls cackled and soared in ever-growing circles as the slightest glimmer of light appeared on the horizon.  Still too dark to see clearly, the gentle lapping of waves upon the shore, and the unmistakably heavy scent of salt in the air, confirmed that it was a great body of water stretching out into the distance, and not some open field in an empty park.  Slowly the light took on a pinkish hue, and the silhouettes of two people appeared against the brightening sky.  One, a man standing stiffly with his hands balled into fists, stared out across the water.  The other was a woman, seated on the beach with her arms wrapped around her knees, her long hair blowing unheeded around her drooping head.  They were clearly together, but at the same time, the distance between them seemed as vast as the ocean. 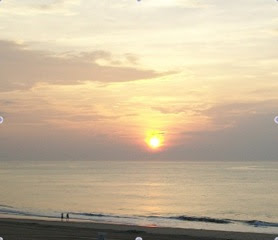 The hardest thing when starting a new story is writing that first paragraph.  It has to grab your readers’ attention and keep them curious enough to turn the page.  Setting the scene, introducing the mood, the time period, and most importantly, the characters, is challenging.  You want to reveal enough to be intriguing, but you don’t want to say everything right away.  That’s what makes writing variations of Pride and Prejudice interesting.  After all, everybody knows Darcy and Elizabeth.  What new thing can possibly be revealed about two characters who have been dissected by hundreds of writers, on both the scholarly and fan fiction sides of things?

And that’s where it strikes me.  How many times have artists painted the same scene?  How many students have sat around a studio with the same model before them, and yet every painting produced is unique.  Each student chooses a particular feature to highlight, a preferred style and medium to use, and inevitably, each mixes their individual feelings into the finished piece.

The same goes for writing Jane Austen variations.  We all start with the same story, the same characters, and then . . . our imaginations are set free to paint that new picture with words.  Where will we put them?  What time period will it be?  What can we change?  What should be left untouched?  And most of all, how can we begin that story so each reader is comfortable with their beloved characters, no matter where they happen to be this time around, and know that in essentials, they are unchanged?

The drone of propellers cutting through the air drew Darcy’s impassive gaze from the field of ripening wheat to the horizon, where three Spitfires flying in close formation sped ever closer.  As a boy he would determinedly spur his pony to chase the shadows of passing aircraft, sometimes waving to the pilots as they swooped down low.  Now a grown man, he sat still and followed the fighters’ progress as they passed over Pemberley, the fading sound of the engines lingering long after the planes were only specks in the cloudless sky.

A different sort of engine sound shifted his attention to the drive and signalled the approach of an open top Cowley and the three people seated inside.  Urging his horse up the ridge, Darcy directed him through the trees and onto the gravelled road.  The motorcar was too far away to see any great detail, but he could tell by the way the people behaved that they were strangers, come to see the estate.

There, a picture painted with words.  Can you see it?  You know that it’s Darcy, you can be pretty sure that the three people in the car are Elizabeth and the Gardiners coming to see Pemberley.  It’s definitely not Regency, but it is familiar.  Your imagination can fill in some of the details even without reading another word.  But that’s the point.  You want to read the words because they take you far beyond that first picture.  The words let you examine and explore, to feel the emotions of the characters and draw out feelings from your own experiences.

Do you have a favorite opening paragraph or sentence?  And no, you can’t pick the obvious, “It is a truth universally acknowledged . . .”

Your post made me think and feel...very pleasant and inspirational. Thank you again for sharing these thoughts with us, Linda. I think you said it all very well, indeed.

Now to Ms. Wells' giveaway...winner's choice of ANY of her eBooks. Folks that is a set of three books for Memory or two books for Imperative and so on. You get the idea. It is a very generous offer and we thank you very much Linda Wells. Answer Linda's question above in the comment section to be entered. The giveaway is international. Be sure to include your email address in the comment. To prevent unwanted spam, put your email address with an (at) instead of @.  Winner will be chosen in a random drawing. Giveaway ends at midnight, September 2.