It is with great pleasure that I introduce debut author, Linda Beutler, today. Although Linda Beutler has authored two books on horticulture, The Red Chrysanthemum, is her first book of fiction. Ms. Beutler uses her expertise of flowers to tell a lovely story of Darcy, Lizzy and the language of flowers. Thank you, Linda, and welcome!

(Meryton Press is also offering a great giveaway so be sure and check it out at the bottom of the post.)

It must be confessed, I do not remember the first time I read Pride
and Prejudice, but it might have been after the 1980 BBC production was broadcast in the USA. I do remember my first Austen, Sanditon, of all things, which seems to get the least attention. I read it as an English Literature major in college, not because I had to, but because I enjoyed coming at major authors through their minor works. But at the time, my passion for words and their clever arrangement was set alight by those Irish wiseacres, Oscar Wilde and George Bernard Shaw.

Throughout my twenties I worked at the Multnomah County Library in Portland, OR, wallowing in the employees’ book-buying policy, which allowed us to acquire titles at the library discount. One of my first purchases was The Penguin Complete Novels of Jane Austen.

Like so many JAFF authors, I fell fast and hard for the 1995 BBC version, but not necessarily for Colin’s damp antics. It was the Andrew Davies screenplay that bewitched me, with its light tone and sparkling blend of his dialogue with Austen’s. What he chose to highlight and omit was nothing short of sublime. That Jennifer Ehle looked more as I imagined Elizabeth Bennet to look than 1980’s Elizabeth Garvey didn’t hurt either. And then there was Colin Firth’s simmering Darcy.

Thanks to that same library system, I can track to the day, September 17, 2011, when I first read Abigail Reynold’s What Would Mr. Darcy Do?, picking it up as a light end-of-term read (I am an adjunct instructor of horticulture at Clackamas Community College). Little did I know this simple gesture would lead me through the looking-glass into a wonderland of authors, titles, and new friends. I read voraciously for months, reaching a first name basis with the Fed-Ex driver who brought my Amazon purchases.

It was while reading Mary Street’s Confessions of Fitzwilliam Darcy when my perspective began to change. I was no longer content to merely read. Elizabeth and Darcy were trying to answer the questions Jane Austen left blank. Before I could control my compulsions, I had a nearly completed novel-length story, and was distracted by a diverging plotline, which became The Red Chrysanthemum (TRC).
When TRC was nearly complete, I decided it might be good enough to publish.

Having already written two books on topics horticultural, I was accustomed to working with a publisher and being edited. Learning editors are our friends is a very important lesson for author’s to learn, and sometimes a difficult one for those scribes who think every word they produce is a pearl of living genius and should never be altered. However, I felt certain if I couldn’t find a publisher, it clearly meant TRC was unworthy, and on my computer, and mine alone, it would have remained.  (I do not mean to paint all of those choosing to self-publish with the same tar brush. I have read both brilliant and horrid self-published fan-fiction. I only know what works for me, to get the best out of what I write.)

After looking carefully at the imprints of some of my favorite authors, I was struck by the welcoming Meryton Press submissions page. I already knew how to frame a submission, and went “old-school”, printing TRC’s first three chapters, including the outline, and a cover letter. When the response came via email, the heart-in-throat sensation I have attributed to Jane Austen’s characters became all too real. If you look up the definition of “giddy”, you will see my face when I read their response. Giddy, and relieved and surprised and scared to death.

In TRC there is a vague resemblance to all JAFF. Most authors give Elizabeth the scent of lavender, and since I love the scent myself, that was easy. Colonel Fitzwilliam had no known first name. He became Richard because it sounded right when others used it. The use of flower imagery and the language of flowers may not be unique to TRC, but it helped weave a thread of light-heartedness I found in Jane Austen and wanted to recreate.

Linda's book may be purchased at the following:
Amazon
Barnes & Noble

Thank you again, Linda, for being my guest and letting my readers and myself get to know a little about you and your path to writing novels.  I always enjoy reading how authors and readers start on this obsession that is Jane Austen, Pride and Prejudice and the world of JAFF. It is a fascinating and entertaining path. By the way, I, too, love the scent of lavender. It has long been one of my favorites and your pictures are beautiful! 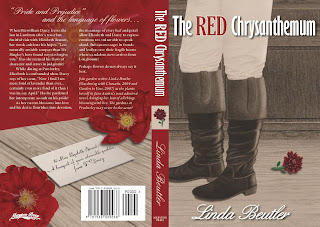 I want to thank Michele Reed and Meryton Press for the giveaway. Ms. Reed is kindly giving away a trade paperback AND  eBook for your eReader, winners choice. There will be two lucky winners and the giveaway is international . To be entered leave a comment below. I always love reading your 'say in the conversation'! Good luck to all. Be sure to include your email address in the comment. To prevent unwanted spam, put your email address with an (at) instead of @.  Winner will be chosen in a random drawing. Giveaway ends at midnight, September 23.
Posted by Janet T at 12:23 PM