All Hallows Eve with Wendi Sotis

Thank you for consenting to be my guest this week, Wendi. I have been looking forward to your post with much anticipation! I have been fascinated with the premise of All Hallow's Eve and love its cover. (I love all of your book covers!)
I appreciate your kind words about my artwork and am thrilled to hear that you enjoy being surrounded by some of it! (Ooh, and I too, love peppermint tea!) Thank you so much as you made my day! I was happy to have your books and quotes in the 2014 calendar. As you saw, I reserved October for All Hallow's Eve! It was perfect. Now to move on to Wendi's post...be sure to watch the trailer for All Hallow's Eve and check out the giveaway.

My thanks to Janet for allowing me to post today, and for including a quote from All Hallow’s Eve in her beautiful 2014 calendar.
I’m a huge fan of Janet’s artwork. My computer is surrounded by her lovely cards and calendar. Whenever I’m writing, I keep one of her compact mirrors handy, along with a mug of peppermint tea, both displaying “The Kiss,” which serve dual purposes—inspiration and utility. I can’t wait to hang up my new calendar and get myself more items with the new artwork!
Since we’ll be giving away copies of All Hallow’s Eve, I’ll tell you a little about the story’s “birth.” AHE was never meant to be! My fingers were itching to write, but I couldn’t start typing the story I had in mind for a month-long NaNoWriMo challenge until November. I searched the internet and found a Halloween challenge to keep my hands and mind busy. I did a little research into the origins of Halloween, and started writing. I had no intention to do anything with it—it was going to be an undeveloped, throwaway story that I’d never think about again after October 31.
Now, here’s where I have to admit to a little secret: I’m a pantster. Don’t worry; it’s not as bad as it sounds. That’s writer’s slang for I “write by the seat of my pants.” In other words, when I start writing, I have no idea what’s going to happen next.
I’ll admit that I’m envious of plotters. I have spent ridiculously long amounts of time online examining the pictures that authors post on their blogs showing their beautifully organized plotting boards covered with color-coded index cards, photos, and sticky notes. Many of them even know which card goes with which chapter number. They have a plan. Everything is prepared before they start writing. They research in advance. They stick to their structured outline, no matter what.
Did you hear a series of wistful sighs as you read that? They were from me.
I have a shelf full of books on plotting. I’ve taken classes. I’ve bought computer programs. Nothing has turned me into a plotter.
For me, plotting ends up being a waste of time. With the stories I’ve tried to plot in advance, the final product is not even close to what was on the original outline.
So, now I’ve come to accept that it’s just not the way I can write. Sometimes I must chart what’s already been written, for example, for The Gypsy Blessing (which will be coming out later this year) I couldn’t keep track of the things I needed to address later in the story without a chart, but it wasn’t anything specific. Plotting in advance doesn’t work for me.
What does happen while I’m writing? Simple—the characters end up doing their own thing. In response to the situations I put them in, they take the story in directions that I had never anticipated. Yes, I’m serious; fictional characters really take over the story. At the end of each sitting, I re-read what I just wrote. Honestly, more than half the time I don’t know from where it came from. Let me tell you, it was a huge relief to hear other writers say the same thing!
I also jump around the story as I’m writing. The characters might react a certain way and the consequences won’t show up for one hundred pages, but these are usually written one after the other, even though I have no idea what might come in between. That makes for a lot of rewriting later, but it works for me.
This is exactly what happened with All Hallow’s Eve. When I began, AHE was only a distraction, one that was supposed to be forgotten once I became busy with something else. When the consequences—the later scenes—started popping into my mind, I realized there was a need for a lot to happen in between. By the time November 1st came along and I was ready to start NaNoWriMo, AHE had already taken on a life of its own. Like the velveteen rabbit, it had become a real story.
If you’d like to see where Elizabeth Bennet and Fitzwilliam Darcy end up in All Hallow’s Eve, we’re giving away some copies right here. See below for the details.


http://www.youtube.com/watch?v=pFcqYBGRs2w
Blurb:
Since ancient times, every Halloween, the ritual of Sanun is performed, freeing the dead to interact with the living for one night. One Evil Soul discovers a way to hide from the Return, remaining on Earth to meddle with the fates of the living. As the centuries pass, it begins to search for the High Priestess, intending to force her to do its bidding, no matter the cost.
Appearances can be deceiving, even in Regency England. To most, Elizabeth Bennet is simply the second daughter of an insignificant country squire, but in truth, she is High Priestess and leader of an ancient cult secretly co-existing alongside British society. Confusion reigns when she learns that the man she despises, Fitzwilliam Darcy, is her Soul Mate, assigned to protect her from Evil. Can they work together to preserve the future? 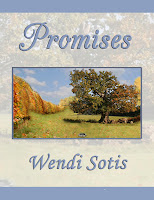 About Wendi Sotis:
Having always been an avid reader and adoring fan of Jane Austen, when her triplets were independent enough that she could find a little time to herself, Wendi searched the internet where she discovered a treasure trove of “fan fiction” written by fellow Janeites. At first, experiencing Austen’s stories from several different characters’ points of view caught her interest, but then she branched off into reading sequels, “what if” stories, and modernized versions of Austen’s tales.
Though she had always aspired to become a writer, Wendi did not make a serious attempt until, after awakening from a dream, her imagination began churning up a tale to surround it. In the midst of penning a number of short stories, in 2010, she began posting the first draft of Dreams & Expectations to several online forums, later published in 2012. Wendi then went on to write another novel-length story, Promises, published in 2011. The Gypsy Blessing will be released later this year.
Wendi continues to write while living on Long Island with her husband, son, and two daughters.
Website: http://wendisotis.com
Facebook:  https://www.facebook.com/author.wendi.sotis
Twitter: https://twitter.com/WendiSotis

I'm so glad to have you visit this week, Wendi. I look forward to the release of The Gypsy Blessing. You are welcome to come back and visit again after its release, or anytime.
For the giveaway of the book, All Hallow's Eve, Wendi Sotis is generously offering a signed paperback or eBook, winner's choice, to a USA winner AND  internationally, an eBook for your eReader to a second winner. To be entered leave a comment below as I always love reading your 'say in the conversation'! Good luck to all. Be sure to include your email address in the comment. To prevent unwanted spam, put your email address with an (at) instead of @.  Winner will be chosen in a random drawing. Giveaway ends at midnight, October 28.