Shannon Winslow is my guest this week and it is such a pleasure to have her share her passion with us. Her book, The Darcys of Pemberley, is one of the first Austenesque sequels that I read. I was just beginning my obsession and was thrilled to read it. I also love all the covers on Shannon's books. You do a fantastic job with them. Thanks so much for agreeing to be my guest. Now please welcome, Shannon Winslow. (There is a great giveaway too!)

Thank you, Janet, for inviting me to visit with your readers here at More Agreeably Engaged. I love making connections with other fans of Jane Austen, and sharing something of my own story.

First of all, I must tell you that I was as surprised as anyone that I should turn out to be a novelist. You see, although I’ve always loved books, and I have dabbled in other creative mediums (music and art), I’d never given much serious thought to writing. Besides, I had a practical career as a dental hygienist, a house and husband to look after, and two sons to raise. I barely had time to read a book, much less write one. And yet now, I have written three. How do I explain this surprising turn of events? Allow me to paraphrase a few lines from Northanger Abbey:

No one who had ever seen me in my early life would have supposed me born to be a novelist. My situation in life, the habits of my mother and father, my own person and course of education, were all equally against me. But when a lady is to be a novelist, the perverseness of forty different circumstances cannot prevent her. Something must and will happen to throw a novel in her way.

And so it was that, through an impulse buy at Costco (a certain video with the handsome face of Colin Firth on the front), I discovered Pride and Prejudice about ten years ago. The video led me to the book, and I simply fell in love – with the story, with Darcy and Elizabeth, with the elegant period language, and with Austen’s witty writing style. I couldn’t get enough.

Pride and Prejudice became my passion – or arguably, my obsession – which soon enlarged to include Jane Austen’s other five novels. Still, it might easily have amounted to no more than yearly rereads of her entire canon and countless watchings of the film adaptations.

Undertaking a huge creative project, like writing a novel, requires a ton of inspiration (which I had, thanks to Jane Austen), but also a major dose of motivation. I found mine in an unexpected place: in the first Pride and Prejudice sequel I happened to stumble across.

I’m fascinated with the “what ifs” of life. What if this had happened instead of that? What if I had turned right instead of left at the crossroads? These questions play a role in my novels and also in my life – the genesis of my writing career specifically.

What if I’d resisted the impulse to buy that movie at Costco years ago? Would I ever have found Pride and Prejudice? I don’t know. But I’m pretty sure that if I had loved that first sequel I read (as many others have), if it had been everything I was personally looking for, I never would have written a sequel of my own. How much I would have missed out on then! 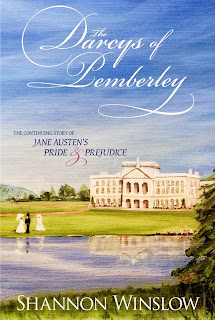 Fortunately, though, I didn’t care for that book (and that’s putting it mildly), and I began The Darcys of Pemberley in response. I wrote, first and foremost, to satisfy my own curiosity about what would happen next, to continue the story the way I thought Jane Austen would have done herself, to spend more time with her characters and in their world. In the process, I discovered another passion – a passion for writing that has changed my life.

Since that beginning, I’ve gone on to publish two more Austen-inspired novels – For Myself Alone (an independent story) and Return to Longbourn (the sequel to The Darcys of Pemberley). I’m currently working on a Persuasion tie-in, starring Jane Austen herself. God willing, there will be many more books to come after that.

I always expected that people might read my novels because they were fans of Jane Austen’s, which is usually the case. However, I’ve been surprised (and delighted!) to find that it sometimes works the other way round – when a person decides to try reading Jane Austen because they like one of my books so much. Maybe by introducing new readers to her, I am in some measure repaying all the countless hours of enjoyment she has given me. At least I hope so.

The Darcys of Pemberley – faithful sequel to Jane Austen’s Pride and Prejudice.
Elizabeth and Mr. Darcy have been happily married for almost a year, but how long can the honeymoon last? The couple’s idyllic life together at Pemberley is threatened by the secrets they keep, the troubles of their closest friends, and a villain in their midst. This is the tale of two romances: the continuation of Darcy & ’s story, and the courtship of Miss Georgiana. If you didn’t want Pride and Prejudice to end, here’s the chance to learn what happens after the wedding, to revisit old friends, and to share the next chapter of their lives.

Return to Longbourn – the Pride and Prejudice saga continues. With Mr. Bennet barely cold in his grave, Mrs. Bennet hatches her plan. The new heir to Longbourn simply must marry one of her daughters. But will it be Mary or Kitty singled out for this dubious honor? When Mr. Tristan Collins turns out to be quite a catch after all, the contest between the sisters is on. Darcy, , and the rest of the cast are back as Mary emerges to take center stage in this long-awaited sequel to The Darcys of Pemberley. Learn what really makes Mary tick. Is she destined to be governess of Netherfield forever, or will she find love and her own happy ending?

For Myself Alone – the story Jane Austen might have written next. This is the tale of Josephine Walker, a bright, young woman whose life is turned upside-down by an unexpected inheritance. With a tempting fortune of twenty thousand pounds, she’s suddenly the most popular girl in town. Yet Jo longs to be valued for who she is, not for her bank balance. She cannot respect the men who pursue her for her money, and the only one she does admire is considered the rightful property of her best friend. Now, even the motives of her new fiancé are suspect. Will Jo have the courage to discover if he truly loves her for herself alone?

Find these novels, as well at Shannon Winslow’s tongue-in-cheek short story Mr. Collins’s Last Supper, at online booksellers Amazon and Barnes and Noble. Learn more about the author and her work at www.shannonwinslow.com

Thanks again, for sharing your passion with us. I have looked forward to your visit and enjoyed your post. I wish you much continued success with all your books now and in the future. I like that you want to tell your stories in a way that Jane Austen would have done herself.

Shannon Winslow is kindly offering a trade paperback to one lucky domestic winner AND  two eBooks for your eReader to two lucky winners worldwide! To be entered leave a comment below as I always love reading your 'say in the conversation'! Share with us how your JA and PnP passion developed. Good luck to all. To be part of the giveaway, be sure to include your email address in the comment. To prevent unwanted spam, put your email address with an (at) instead of @.  Winners will be chosen in a random drawing. Giveaway ends at midnight, October 21.
Posted by Janet T at 10:10 AM