A Story of Healing with Author, Jadie Brooks

My guest today is debut author, Jadie Brooks. Her book, Mr. Darcy's Dilemma and Delight, was released in October. Jadie shares an excerpt below and also tells us how this story originated. The picture of Jadie Brooks is taken in Bath on the steps of the house where Jane Austen resided when she first lived in Bath. I love the picture and think it is perfect for the post! Ms. Brooks is also having a giveaway so be sure and check out the details below. Welcome, Jadie Brooks. 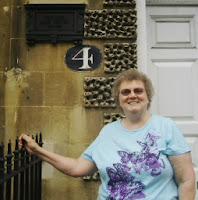 Thank you, Janet for having me here on More Agreeably Engaged. It is wonderful to be where so many wonderful writers have been.

I started writing stories in my teens, but I have been a story teller most of my life. I can remember convincing a third-grade school friend that a place quite close to my home was where the character in our favourite book must have lived. I was nearly convinced myself since that was what I imagined as we listened to the teacher read to us.

I didn't finish many of my earlier stories, but the year 2000, just about the time my daughter left for college, I started writing again. At first, I wrote sci-fi fanfiction, but sometime around 2009, I discovered the wonderful world of Jane Austen variations, particularly the Pride and Prejudice variety. I had loved the Jennifer Ehle/Colin Firth version for many years, but it was not until I read Linda Berdoll's Mr. Darcy Takes  a Wife did I understand what I was missing. 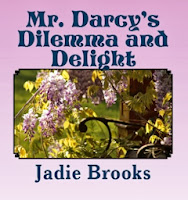 At first, I didn't think I would ever write a variation of Pride and Prejudice of my own until an idea popped into my head. I had read countless stories by then and had not read one like it, so I ventured into Austenesque fiction. During writing of the pages of that story, another idea grabbed me and would not let go. What if were assaulted? What would her reaction be? What would Mr. Darcy's be? I put aside the first story and started writing to answer those questions. The resulting story was Mr. Darcy's Dilemma and Delight.

The story begins after Jane is ill at Netherfield and before the Netherfield Ball. is brutally attacked and Darcy comes to her rescue. What follows is a hard-fought journey for them both. They learn to deal with the aftermath of the attack and through prayer and persistence, to find love and joy. It tells a story of healing.

Here is just a taste of the first chapter of Mr. Darcy's Dilemma and Delight.

Fitzwilliam Darcy of Pemberley in Derbyshire inhaled deeply of the crisp autumn air as he stood in the paddock waiting for his horse to be brought to him.  The day was perfect for his desired solitary ride. The morning sky shone bright, clear, and the air was cold. He had left the house eager for a good gallop away from the insipid, overly flattering attentions of Miss Caroline Bingley. Since he was a guest at Netherfield, the house her brother and Darcy's good friend Charles had leased, there were few places inside where he could avoid her.
The groom finally brought Darcy's horse, Paladin, to the mounting block. As soon as Darcy was in the saddle and out of the yard, the large bay obliged his master by galloping quickly over Netherfield's pastures. The two travelled with great pleasure over many acres of land before Paladin slowed and began to favour his left front foot. Darcy quickly pulled the animal to a stop and dismounted. After examining the horse's leg, he found that his mount had a loosened shoe.  He knew he could not ride anymore without the risk of injury to the stallion.
Taking stock of his surroundings for the first time, Darcy realized he could see the spire of Longbourn church at not too great a distance. The road to Meryton lay between his location and the Longbourn estate. Grabbing up the reins, he guided his horse down the rise toward the road.
Darcy understood that most of his morning would be spent in the pursuit of a new shoe for his mount. He kicked at the grass and then upbraided himself for his irritation. Nothing could be gained in allowing free rein to the frustration caused by the inconvenience of having to find a blacksmith. Only aggravation and a bad mood would be the result. His father had never shown such a negative attitude, so he decided to follow his parent's example once again.
The late Mr. Darcy would also have been ashamed of his son's conduct during the past few weeks. He had allowed his distress about his young sister's near elopement to colour his dealings with the people of the small Hertfordshire village. Lifting his eyes heavenward, he asked for patience and understanding of why this inconvenience should happen on such a fine day for riding. Drawing upon the sudden infusion of strength resulting from the prayer, Darcy moved on with resolve.
When he arrived at the fence that separated the field and the lane, he could find no gate through which to pass. To his left he spied a copse of oaks with a brook running through it. Paladin could use the refreshment after such a ride, as could I, he thought.
Guiding his horse toward the bubbling stream, Darcy thought he heard a woman cry out. He stopped and strained his ears to listen. Perceiving no other sound, he shook his head. It must have been a magpie, he told himself, remembering several swooping and diving across his path as he rode.
Darcy tethered Paladin within reach of grass and the stream before he stuffed his gloves into his coat pocket and crouched to scoop up a drink for himself. When he finally stood up again, he became conscious of the fact that he could not see the road from his position amongst the trees. Leaving his horse, he walked toward the place where he knew the lane to be. As he reached the edge of the grove, he viewed the road through a tall hedge of wild roses growing over the fence.
Pulling a face that expressed his annoyance at not being able to find a place from which to gain the road, Darcy made to turn back to his horse when he heard the sound of rapid foot steps on the lane. Curiosity got the better of him, and once more he peered through the gap in the hedge. He was astonished by what he saw.
George Wickham strode quickly up the lane toward the . He was buttoning his fall, which in most circumstances would not have seemed too unusual. Darcy knew of men who relieved themselves by the side of a road, however ungentlemanlike the action was. On the other hand, because of the bright, bloody scratches on Wickham's cheeks and the leering, smug expression upon his face as he straightened his uniform jacket, Darcy came to a completely different conclusion.

Contact Jadie Brooks on her Facebook page or by email at: author.jadiebrooks@gmail.com
Her book may be purchased at Amazon and Createspace

Thank you for taking time to visit More Agreeably Engaged, and telling us about your love for Jane Austen and Pride and Prejudice. I always enjoy learning how a writer found that spark and turned it into a published novel.

Thank you also for allowing me to host a giveaway of your book. This giveaway is for a paperback or eBook for an eReader, winner's choice, to one lucky winner in the USA. The second giveaway is for an eBook for an eReader to a lucky winner worldwide. Good luck to all. Leave a comment to be entered. We want to hear your say in the conversation. Be sure to include your email address in the comment. To prevent unwanted spam, put your email address with an (at) instead of @.  Winner will be chosen in a random drawing. Giveaway ends at midnight, November 25.
Posted by Janet T at 11:09 AM