Following is my last review for Tales of Less Pride and Prejudice. I hope you have enjoyed reading about these books by Alexa Adams, plus the provoking excerpts from her WIP,

The Madness of Mr. Darcy. Thanks to each of you for stopping by and leaving a comment. Remember to leave a comment at each review to triple your chances of winning.

Holidays at Pemberley by Alexa Adams 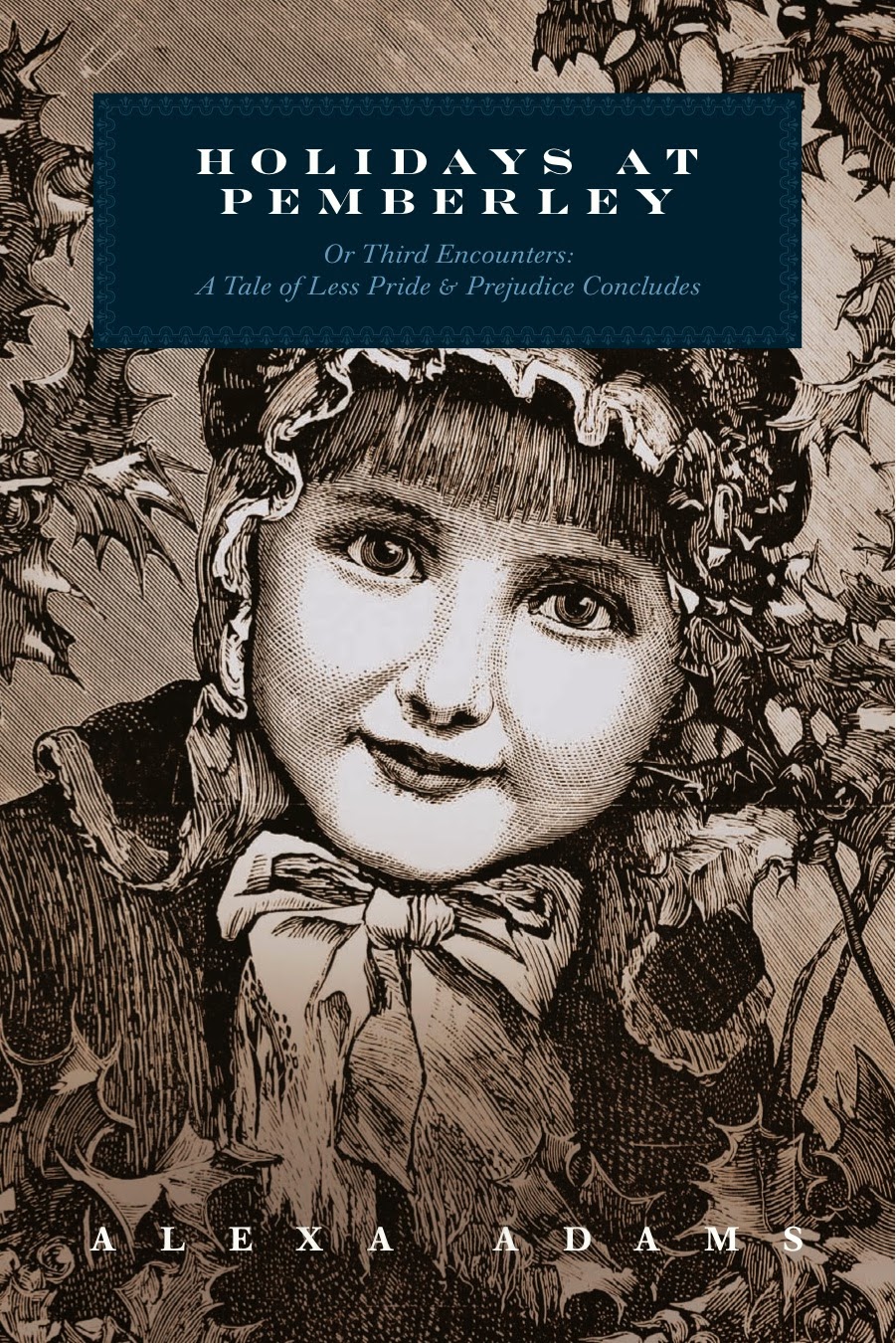 Holidays at Pemberley is the third book and conclusion of the Tales of Less Pride & Prejudice Series. Alexa Adams has stayed consistent throughout these books with her clever wit and lovely Regency language. As I mentioned in my reviews of the first two books, her style and tone of writing is so near Jane Austen that it is a pleasure to read the stories.


This novel opens with a brief account of an incident that took place when Charlotte Lucas was a small child. Charlotte was able to help a young boy that had just experienced a traumatic incident. This was a touching and significant scene. It was nice to learn something about the early Lucas family and their goodness.

Fast forward to Christmas right before Darcy and Lizzy marry. Netherfield Hall is the scene for a ball to honor Charles Bingley’s future wife, Jane. The newly married Wickham’s are making their intrusion as if the ball was for them. Typical behavior for them now and later, but I did so enjoy when Caroline paled at the discovery that her husband had misrepresented some very significant facts. That was a priceless moment.

Charlotte Lucas has the main storyline and it is nice to see her find happiness and yes, even love. During her visits to Pemberley, she has the opportunity to witness true love between her dear friend and Mr. Darcy. Charlotte's path to love is not easy and her feelings are exposed. Her discovery that she too, can marry for love, is very nicely done.  Her gradual change and her eventual courtship are gratifying to read. I like this Charlotte and enjoyed her story very much.

There were many amusing scenes between Mrs. Bennet and Lady Catherine, who is still quite likable. Each lady claims success for the Collins’s birth of a male child. Next is their constant bickering over his proper rearing. This squabbling was quite comical.

I was displeased with Mr. Bennet when he invited the Wickham’s to Pemberley for Twelfth Night without informing Elizabeth and Darcy. That did not set well and seemed unlike him. I guess the saying, ‘All’s well that ends well,’ fits here. The outcome proved beneficial to Lady Catherine and I did enjoy how she handled the situation. Happily, Caroline and George will never be the same!

Even though the main plot is about Charlotte Lucas, the book covers several holidays and balls at the beginning of the Darcy’s marriage, allowing the reader to spend time with them. The narrative also gives some additional details from plots in the first two books, details that give more meat to those stories. With all the same characters from the first two books, Holidays at Pemberley could stand alone but would possibly raise a few questions. I recommend reading First Impressions and Second Glances beforehand. They are excellent books that are not to be missed! Thank you Alexa Adams.


I’m very pleased to share a few excerpts from my next novel, The Madness of Mr. Darcy. This is still a work in progress and subject to change. I hope to have it published by early 2015.

Here is a conversation between the housekeeper at Ramsey House, the private mental asylum in which Mr. Darcy is confined, and her son, one of the orderlies. 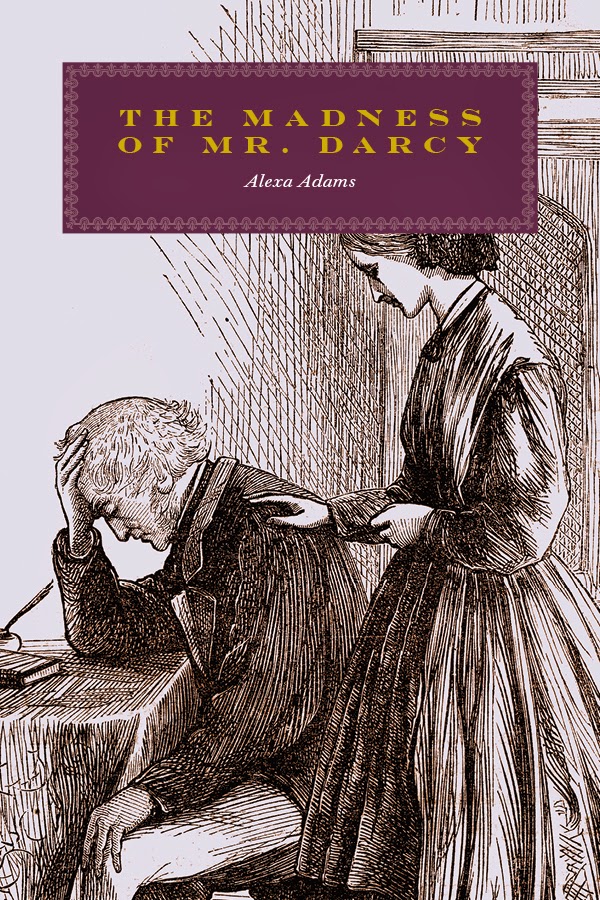 Samuel Johnson shut the door, through which no sound penetrated, behind him. Following the corridor that lead under the grand staircase, he opened a hidden door that led below stairs. Quickly arriving at his mother’s office, he rapped three times on the door and was admitted.

Mrs. Johnson shut the door behind her son. “Well?” she asked.

“If they require anything, they can fetch it themselves,” he replied, taking the seat before her desk.

“Humph!” She moved stiffly across the room to her own chair. “I never knew the respectable woman who sat up all hours of the night, alone with a man behind closed doors!”

Her son paid this little head, as it was an oft-repeated complaint. There was more to say this evening. “They were sitting might cozy on the sofa when I came in.” He stoked the fire.

“Were they indeed?” she asked excitedly. “She is a bold one!”

He leaned forward placing his elbows on the desk. His mother mimicked the gesture. “Twas nothing compared with the look she gave the new man this morning.”

“Do they, now?” Her face was all astonishment, and he grinned at his mother. “Do you think he has her story?”

“Wouldn’t surprise me. No one casts a glance like Mrs. Bennet did today on a person not in their confidence. And Mr. Darcy was struck dumb at the sight of her, too: every bit the lost lover finding his way home.”

Mrs. Johnson sat back, digesting this information. Her son watched her with amusement, awaiting her next words. “Sammy,” she began after several moments, “you don’t suppose Mr. Darcy might have been involved in her downfall?” She did not wait for a reply, but stood up and began pacing the small room. “We know she was gently born. No doubt about that. And we know her family suffered a reversal in fortune. But all those other sisters – not one of them holds a post such as she does!”

“One is a governess,” he pointed out.

“Yes, but there’s a vast difference between working in a proper house and here, let alone where she was before.”

“At least at Summers Wood the ladies and gents kept to themselves,” he supplied. “And they took paupers!”

Mrs. Johnson stopped pacing and stared at her son. “If something improper were to happen between Mrs. Bennet and a guest, she’d be packed off as soon as the master could contrive it.”

“I don’t think Dr. Wilson would toss her off, though she would definitely lose her post. He might marry her!”

Mrs. Johnson had resumed her pacing and only heard part of this. “Mr. Darcy is a lunatic. He admits almost proudly how he near tortured to death some poor soul! No woman would ever accept his proposal, if he is so far gone as to make on to the Matron!” she chortled.

“I didn’t mean Mr. Darcy,” her son retorted. “What if Dr. Wilson asked Mrs. Bennet to marry him?”

Her knees locked, and she was lucky to be in reach of her chair, or she might have crashed to the floor. Steadying herself by clutching the desk, she said in a cracking voice, “Master Frederick would never be so foolish.” Nevertheless, it took her nearly two glasses of sherry to recover from the shock of her son’s suggestion, and she only ever took a nip on festive occasions.


Thank you again, Alexa Adams for sharing these excerpts from your latest work. It has been a pleasure to read them. Please keep us updated on this exciting story. As you can see, you have generated much interest.


Alexa Adams is generously giving away one of the three books being reviewed, to two lucky people. A domestic winner will have the choice of a paperback or eBook. An international winner will receive an eBook. To be entered leave a comment below as I always love reading your 'share in the conversation'!  As a reminder, if you leave a comment at each review, you triple your chances of winning! Good luck to all. Be sure to include your email address in the comment. To prevent unwanted spam, put your email address with (at) instead of @. Winner will be chosen in a random drawing. Giveaway will end at midnight, April 2, 2014.
Posted by Janet T at 12:16 AM