My next guest is the author of 43 novels and is currently writing 3 mystery series. She is here today to tell us about one of those mystery books, A Jane Austen Encounter. I think you will all be as delighted to meet her and hear of her books as I have been. She also has some absolutely gorgeous pictures of Bath to share with us. Please welcome Donna Fletcher Crow.

Without a second’s thought I replied, “Jane Austen.”

In the silence that followed he blinked. “Wow.” Then he added, “That’s really cool. You’re so definite.”
Yup, that’s it. My great literary love affair. Long before Colin Firth in a wet shirt, long before the Lizzie Bennet Diaries, long before I heart Darcy book bags. There was just Jane Austen and me.

So it’s really rather surprising that A Jane Austen Encounter is number three in my Elizabeth and Richard literary suspense series where each book features a favorite author for my literature professor sleuths to solve their crime around. Perhaps I was just working up to Jane. And I don’t suppose she would mind being preceded by William Shakespeare and Dorothy L Sayers.

Besides getting to spend more time with Jane, one of the best parts of writing A Jane Austen Encounter was doing the background research. One of my primary goals as a writer is to give my readers a “you are there” experience. I want my readers to see, hear and feel what my viewpoint characters are experiencing. In order to do that, I have to experience it first. 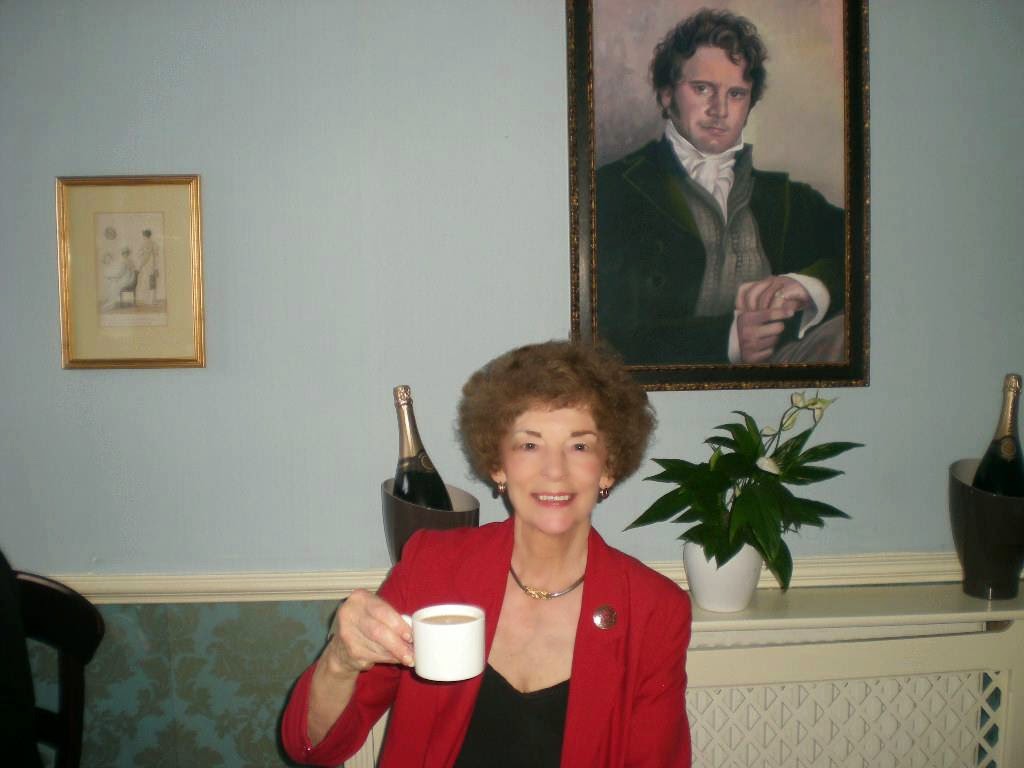 Refreshed, energized and armed with several good maps, I set out on the Jane Austen trail, attempting to visit Jane’s various lodgings and scenes from her novels. I was constantly amazed and grateful that so little had changed in 200 years.

Just up— and I do mean “up” since Bath is a city of hills— from the Centre is No. 13 Queen Square where Jane stayed with her mother and brother Edward in 1799. Queen Square is still an elegant green oasis near the heart of the city, just as it was when Jane spent the six happy weeks here that fed her imagination for writing Northanger Abbey.

Catherine Morland was enchanted by Bath and I believe it’s fair to think that her feelings reflect Jane’s early experiences in the city. Catherine attended her first ball at the Assembly Rooms, visited the Pump Room, the Abbey, and walked in the Royal Crescent looking for Henry Tilney.


Then in 1800 Jane’s father The Rev. George Austen retired from his Hampshire parish and announced that the Austen household was moving to Bath where he and his wife had been married. Jane was so shocked she fainted.

The family took lodgings at No. 4 Sydney Place, across from the beautiful Sydney Gardens which Jane enjoyed. The Austens lived here for five years until Mr. Austen’s death. Most biographers believe Jane was too unhappy during this time to write. Although it’s possible she was having too much fun.


After The Rev. Austen’s death the Austen ladies were required to economize so they moved to 25 Gay Street which is just a few doors up from the present Jane Austen Centre.

Successive economies required a move to the unfashionable, and damp, Green Park buildings which no longer remain. Nor does the house in which they lodged in their final frugality in Trim Street, an area populated with beggars and prostitutes in Jane’s day, but fortunately somewhat cleaned up today.

Anne Elliot’s dislike of Bath is undoubtedly a reflection of Jane’s later experiences here, but the Gravel Walk where Anne and Captain Wentworth resolved their relationship is still a lovely, secluded spot in the midst of the bustling city.

For a more complete experience of the Jane Austen trail, join Elizabeth and Richard in A Jane Austen Encounter.  Http://j.mp/RGkbn0   Visit all the sites so redolent of Jane and her characters in the beautiful city of Bath, stay in the Chawton House Library and visit the charming cottage where Jane’s writing flowered and the nearby Steventon church where her father was rector and her own faith established, stand by her grave in Winchester Cathedral, and enjoy your time at the lovely country estate of Godmersham. But don’t let your guard down. Evil lurks even in the genteel world of Jane Austen.

Donna Fletcher Crow is the author of 43 books, mostly novels of British history.  The award-winning Glastonbury, A Novel of the Holy Grail, an epic covering 15 centuries of English history, is her best-known work.  She is also the author of The Monastery Murders: A Very Private Grave, A Darkly Hidden Truth and An Unholy Communion as well as the Lord Danvers series of Victorian true-crime novels and the literary suspense series The Elizabeth & Richard Mysteries. Donna and her husband live in Boise, Idaho.  They have 4 adult children and 13 grandchildren. She is an enthusiastic gardener.

To read more about all of Donna’s books and see pictures from her garden and research trips go to: http://www.donnafletchercrow.com/
You can follow her on Facebook at: http://ning.it/OHi0MY

Donna Fletcher Crow is allowing me to host a lovely giveaway of three electronic books of A Jane Austen Encounter. Thank you, Donna.  To be entered leave a comment below as I always love reading your 'share in the conversation'!  Good luck to all. Be sure to include your email address in the comment. To prevent unwanted spam, put your email address with (at) instead of @. Winners will be chosen in a random drawing. Giveaway will end at midnight, April 29, 2014.
Posted by Janet T at 11:10 AM