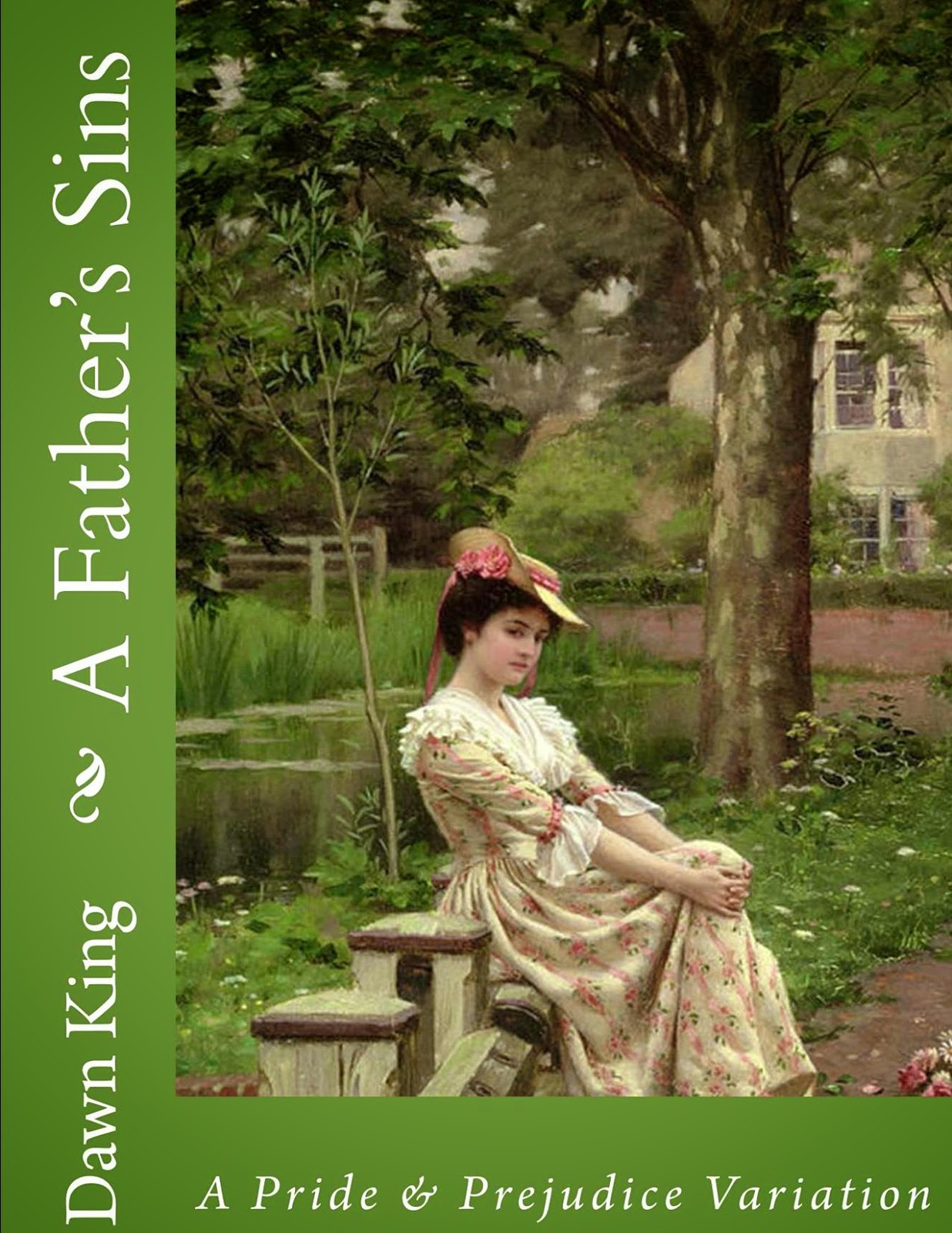 Debut author, J Dawn King’s book, A Father’s Sins, grabbed my interest and held it from the very first page until the last. I did not want to put it down. I adored the prologue! It was well done and set the stage for the events that follow.

Since this narrative is a variation, changes are to be expected. A few of the characters have different personalities but those changes are the basis for the premise. Mr. Bennet was a hard man and blamed Lizzy for his foolish actions. George Darcy made a mistake in his youth that hurt his children. They ultimately pay for their father’s sins as Lizzy does for her father’s.

Darcy and Elizabeth are pretty true to character and I loved them both.  This is a wonderful Darcy and a witty, caring Elizabeth. There is no insult at Meryton, as Lizzy is not present at the Assembly. The major obstacles to the courtship of my favorite hero and heroine are mostly from outside sources and those hindrances abound.

Lord and Lady Matlock, their heir, Henry and dear Colonel Fitzwilliam are absolutely delightful. They are some of my favorite characters and play a pretty major role in the story as does Georgiana. Lizzy helps Georgiana to ‘stand tall’ and become a more confident young woman.  The process is endearing.  There are a few new characters, Mrs. Nichols, for one, and some familiar ones, the Hills, that also have a significant part in the events.The Gardiners live up to my expectations of Lizzy’s caring and well-mannered aunt and uncle, who play an important role in Lizzy's life. Wickham is up to no good and is utterly despicable. Caroline Bingley is disgusting. Lady Catherine is her usual self but Anne is a bit ‘stronger’. Charles Bingley learns to stand up for himself rather than let others lead him. In Jane’s character I was a bit disappointed, but under the circumstances, I could ‘kind of’ understand why she might be somewhat altered.

On several occasions the author used Elizabeth’s voice to make a statement that I have tried to live by in my life. To summarize, ‘It is not so important what happens to you, as what happens in you.’ A person can let circumstances or words hurt him or not affect him. It is a choice! (And can be such a life changing choice) I was moved by this theme and was glad that Mrs. King allowed our heroine to grow in wisdom and character from her father’s sins rather than be destroyed by them.

The narrative is fast-paced, action-packed, suspenseful and emotional, is angst driven and not bogged down with detail. Darcy and Elizabeth are in company through a good part of the book, although not necessarily under the best of circumstances. Their ‘together time’ is what I like best and it is clean with no explicit sex.


I thoroughly enjoyed this book. Even though I hated for it to end, I felt really good inside---very satisfied. For a first novel, J Dawn King did an excellent job and I am impressed with her writing. I understand she has more works in progress and I eagerly await them. Thanks for a book well done!

J Dawn King  is generously giving away A Father's Sins to two lucky people. The giveaway is international and is for one paperback and one eBook. To be entered leave a comment below as I always love reading your 'share in the conversation'!  Good luck to all. Be sure to include your email address in the comment. To prevent unwanted spam, put your email address with (at) instead of @. Winners will be chosen in a random drawing. Giveaway will end at midnight, April 10, 2014. (I have extended the giveaway an extra day since I was a day later posting my review.) If you leave comments here and on the post by J Dawn King, you will double your chances of winning a book.
Posted by Janet T at 6:33 PM