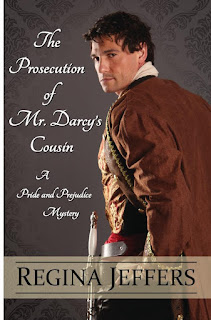 The latest release by author Regina Jeffers, is murder mystery, The Prosecution of Mr. Darcy's Cousin. It involves our favorite Pride and Prejudice characters plus a few new ones! Yay, for all us readers!

Regina Jeffers first visited More Agreeably Engaged on 26 March, 2013. She was my third guest author and I was so excited to have her visit. She had just released her book, The Mysterious Death of Mr. Darcy and she had us all in an uproar over what might have happened to him. We knew he certainly could not have died, not our Mr. Darcy! The book was excellent and kept me turning the pages. It had many twists and turns and if you have not read it yet, I highly recommend it. Regina Jeffers can write a mystery!

Regina Jeffers is back today and I am thrilled as it has been way too long since that first visit. Regina is here to talk about the Bow Street Runners and to share an excerpt from Chapter 2 of The Prosecution of Mr. Darcy's Cousin. After reading the blurb and excerpt, I believe you will agree it is a book not to be missed! Please join me in welcoming back Regina Jeffers.


In my newest cozy mystery, The Prosecution of Mr. Darcy's Cousin, the character of Thomas Cowan makes a repeat performance. Readers met Cowan as a friend of and former sergeant serving under Colonel Fitzwilliam during the Spanish campaign of the Napoleonic Wars in The Mysterious Death of Mr. Darcy.
Cowan, a former Bow Street Runner and a man of great intelligence, is essential to solving the mystery plaguing the Darcy family. But what exactly was a "Runner"?
The Bow Street Runners are often referred to as London's first professional police force. Originally numbering just eight, Henry Fielding founded the group in 1749. Unlike the "thief takers" of earlier days, the Runners followed strict guidelines and regulations. They were attached to the Bow Street magistrate's office, hence their name. ("Bow Street Runners and theMaritime Police" JaneAusten.co.uk)
From Old Bailey Online, we learn that the Runners were part of Fielding's innovations in crime fighting. In the 1730s, magistrates in London and Middlesex set up "rotation offices" where the citizens could find a magistrate available at certain hours each day. One such office was Bow Street, near Covent Gardens. Sir Thomas De Veil set up the magistrate's office in 1739, but the Fielding brothers (Henry and John) took it over after De Veil's death in 1749. The original men involved with the office were thief takers sent out on retainers. "Runners" was not a name readily accepted by the men. They preferred "Principal Officer" of Bow Street. The most famous of the time were John Sayer and John Townsend, who amassed a small fortune in their service.
The Runners were certainly the first group to  follow a method of investigation. First, the Fieldings considered the thief takers as essential in fighting the crime found in London's streets. They investigated crimes for the government, protected the royal family, and traveled about the country to examine crimes. A series of mounted and foot patrols covered the London streets on a regular basis, as well as organizing part-time constables to patrol the major roads leading in and out of London to deter robberies, etc. The Fieldings kept meticulous records of criminals and disseminated the information to decrease the chance of repeated crimes.
The Middlesex Justices Act of 1792 founded seven policing offices in the borough, each with stipendiary magistrates and six constables to investigate crimes in the area. The Thames River Police Office at Wapping (the setting for much of the action of The Prosecution of Mr. Darcy's Cousin) opened in 1800. One hundred officers patrolled the docks and ship yards from this office. 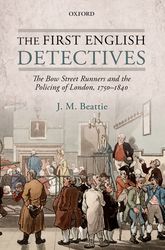 Unfortunately, by the 1820s their reputation stood in disarray. Many individuals within the organization associated with common thief takers and were known to look the other way when a crime was not of notice. The government disbanded them in 1839. [J.M. Beattie, TheFirst English Detectives: The Bow Street Runners and the Policing of London,1750-1840 (Oxford: Oxford University Press, 2012)
By the beginning of the 1800s, many defendants who appeared at Old Bailey were appended by salaried officers, who testified at the trials.
Another book I particularly like on the subject is this one: David J. Cox, A Certain Share of Low Cunning: A History of the Bow Street Runners, 1792-1839 (Portland: Willan Publishing, 2010).
~~~~~~~~~~

The Prosecution of Mr. Darcy's Cousin: A Pride and Prejudice Mystery
Fitzwilliam Darcy is enjoying his marital bliss. His wife, the former Elizabeth Bennet, presented him two sons and a world of contentment. All is well until “aggravation” rears its head when Darcy receives a note of urgency from his sister Georgiana. In truth, Darcy never fully approved of Georgiana’s joining with their cousin, Major General Edward Fitzwilliam, for Darcy assumed the major general held Georgiana at arm’s length, dooming Darcy’s sister to a life of unhappiness.
Dutifully, Darcy and Elizabeth rush to Georgiana’s side when the major general leaves his wife and daughter behind, with no word of his whereabouts and no hopes of Edward’s return. Forced to seek his cousin in the slews of London’s underbelly, at length, Darcy discovers the major general and returns Fitzwilliam to his family.
Even so, the Darcys’ troubles are far from over. During the major general’s absence from home, witnesses note Fitzwilliam’s presence in the area of two horrific murders. When Edward Fitzwilliam is arrested for the crimes, Darcy must discover the real culprit before the authorities hanged his cousin and the Fitzwilliam name knew a lifetime of shame.
~~~~~~~~~~
Excerpt from Chapter 2 of The Prosecution of Mr. Darcy's Cousin: A Pride and Prejudice Mystery
“Yes, Sir.”
A young clerk rushed forward to greet Darcy, whose arrival set his London household on its ear. After his marriage to Elizabeth Bennet, Darcy sold the smaller bachelor Town house he purchased after reaching his majority and acquired the larger one to accommodate what he hoped would be extended family. Yet, until Elizabeth turned his world on its head, Darcy did not realize how much he would enjoy having a loud, noisy family under his roof.
“How may I serve you, Sir?”
Darcy ran his gloved fingers over his lapel.
“Mr. Darcy to speak to Mr. Cowan.”
The clerk presented a proper obeisance. The man glanced at an appointment log lying open upon the desk.
“Was Mr. Cowan expecting you, Sir?” the clerk asked as he ran his finger down the page, searching for Darcy’s name.
Any other time, Darcy would consider the young man’s loyalty admirable, but this matter with Edward wore Darcy’s patience thin.
“Simply inform Mr. Cowan of my desire to speak to him,” he said with practiced authority.
The clerk glanced over his shoulder as if considering a denial.
“Certainly, Mr. Darcy... if you would care to wait.”
The man motioned to a cluster of straight-backed chairs lining a far wall.
Darcy offered a crisp nod of his head. He did not observe the clerk’s retreat; yet, he knew the clever fellow would inform Cowan of Darcy’s presence.
Instead, Darcy assumed a position by the window to look out upon the busy London street. Cowan chose well for his offices, near enough to Mayfair to be accessible to the haut ton, but equally accessible to London’s swelling middle class.
Quick footsteps upon the polished wood floor announced Cowan’s approach.
“Darcy,” the man called with a ready smile, extending his hand in welcome. “What brings you to London? And how is Mrs. Darcy? I pray your lady is well.”
Darcy accepted Cowan’s hand.
“Mrs. Darcy remains her spectacular self. She is in Oxfordshire with my sister. Elizabeth sends her regards.”
Darcy eyed the lingering clerk.
“If you have a few minutes to spare, I have a need of your services."
Cowan frowned his curiosity.
“For you I will make time.”
He turned toward his clerk.
“When Mr. Leighton arrives, apologize for the delay, and ask the gentleman to wait. Be certain to provide him a cup of tea.”
The clerk blushed.
“Yes, Sir. Would Mr. Darcy also care for tea?”
Darcy shook off the offer.
“I will be quick, Cowan. I realize you are engaged.”
“Never too occupied for you, Darcy.”
His friend directed Darcy’s steps to a small, but comfortable, office at the rear of the building. The room reflected the former Bow Street Runner’s simple, classic tastes. After they settled, Cowan leaned forward.
“What is so pressing, Darcy?”
Darcy removed his gloves and placed them, along with his hat, on the desk’s corner.
“I have a matter of a personal nature.”
After the Runner’s assistance with his family’s debacle in Dorset, Darcy knew he could trust Thomas Cowan.
“Without warning, the major general abandoned his wife and daughter in Oxfordshire. My sister received but one brief note declaring her husband’s desire to return to his military service and instructing Georgiana to seek a homecoming with me.”
Cowan’s scowl deepened.
“I feared for some time that Edward Fitzwilliam would not willingly encounter his ghosts before they came to claim him.”
Cowan retrieved a small journal from his desk. Opening it, he prepared to write.
“I require all the details you possess. After I determine Mr. Leighton’s issues, I will set my resources into action to learn more of the major general’s trail.”
Despite Darcy’s initial anger with the major general for running off to what was a probable drunken pity-laced birl, Darcy experienced a shiver of dread run down his spine. Perhaps something more sinister occurred: Cowan’s remark emphasized Darcy and Elizabeth’s private concerns.
With anxiety lacing his explanation, Darcy summarized what he knew of Edward’s recent activities, belatedly realizing he lacked the details of what occurred between his sister and his cousin.
“Perhaps I should send to Witney for Elizabeth and Georgiana to join us,” he suggested. “My sister could better address your questions.”
In silence, Cowan studied his notes.
“I think it best we leave the ladies in the country for now. I suspect the major general sought solace in London’s pitch, for it reflects his opinion of his worth.”
Although he would not own it, the investigator’s words reinforced Darcy’s notion of the sword of Damocles above their heads.

~~~~~~~~~~
Purchase Links:
Kindle, Amazon, Barnesand Noble and Nook
~~~~~~~~~~
Poor Colonel Fitzwilliam and Georgiana, too. The Colonel cannot be involved in the murders...please say it is not so! I am glad that Thomas Cowan is around to help solve this murder mystery. Thank you, Ms. Jeffers for providing us with such a thrilling blurb and enticing excerpt. I also found the post on the Bow Street Runners to be very informative and helpful. Ooooh, I do look forward to reading the 'rest of the story'!
Regina Jeffers is giving away two, yes, that's correct, two eBook copies of The Prosecution of Mr. Darcy’s Cousin: A Pride and Prejudice Mystery. To be entered into the international giveaway, please have your share in the conversation by leaving a comment below along with your contact information. Thank you, Ms. Jeffers for this awesome giveaway. The giveaway ends at 11:59 PM, 2 July, 2015. Good luck to all.
Posted by Janet T at 10:12 AM