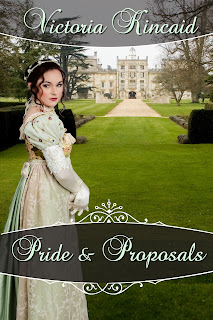 Victoria Kincaid's latest novel, Pride and Proposal, has been released and is getting some excellent reviews. Victoria visits today with an excerpt, a blurb and her views of Jane Austen and feminism. She has some valid points that I think you will find enlightening. I know you will enjoy the excerpt!

Victoria first visited my blog on June 25, 2014, almost a year ago to the date. She had just released her first book, The Secrets of Darcy and Elizabeth. It is an excellent book with an original and believable plot. I enjoyed it immensely and yes, I do still need to write a review! :) I feel confident that this newest book will be just as riveting. Please join me in welcoming Victoria Kincaid.


There’s been a lot of debate recently about whether romance novels can be feminist.  I believe they can, and one reason is because of Jane Austen.  Now, someone would say that Austen didn’t write romances, and I agree that her novels contain a great deal of social satire and different layers of meaning not found in your conventional romance novel.  However, the plot of each of her stories revolves around people falling in love and getting married. So, yes, I would consider them romance novels in the broadest sense.

But was she feminist?  Obviously Austen’s life pre-dates women’s suffrage and other women’s rights movements so I wouldn’t say she set out with a conscious intent to make political points about women’s role in society.  However, I would argue that she is feminist in the broadest sense of the word for many reasons, not the least of which is because she would never have published a book if she hadn’t been a forward thinker about women’s rights.  Yes, she published anonymously and she might not have done so if she hadn’t needed money.  However, the fact remains that the prevailing notion at the time was that women should remain within their “sphere” (i.e. the home), and should not venture out into the public realm of say…publishing.

But that is not the only way I would say Austen is radical.  On the surface her books sometimes appear to be rather conventional novels about women falling in love and getting married.  However, in the process of telling these love stories, Austen also subverts a lot of the expectations of gendered behavior for women.  While Elizabeth Bennet gives lip service to many of the expectations for a “proper” lady, Austen makes it clear she does not conform to many of the unwritten rules.  She wanders the countryside by herself, allows her gown to get muddy, speaks her mind freely, and—most shockingly—turns down the proposals of two eligible men.  She may not agitate for the right to vote, but Elizabeth’s life embodies a refusal to be constrained by the more nonsensical rules of society.  In fact, her biggest nonconformity is that she isn’t overly concerned with other people’s opinions of her—an issue which hampers many of the other female characters in the novel.

However, she does balance her unconventionality with common sense.  On the other hand, her sister Lydia ignores social dictates about women’s chastity and creates a crisis for the entire family.  She resembles Charlotte Lucas (yes, really!) in that she values marriage above all other goals.  For both women, their husband’s character is far less important than attaining the marital state.  While Elizabeth’s insistence on marrying for love may seem like nothing more than Austen’s advocacy of romanticism, it actually serves as the character’s assertion of her own individuality.  She cannot remain true to herself if she places economic considerations ahead of her own feelings and happiness.
Thus Austen uses romance for a feminist purpose—and starts a new tradition.

Darcy was writing last-minute letters in his study, while Tucker packed away estate records into a trunk on the far side of the room.  Without any warning, Richard burst through the door.

Darcy did not glance up.  “You must have received my note.”

Richard brandished the paper at him. “Is this a joke?”

Darcy stood, folded his letter, and handed it to Tucker for posting.  He waited until Tucker had departed to take the trunk up to the attic.  “No,” he responded shortly.

“It must be,” Richard insisted.

“Look around you.” Darcy’s voice was calm.

His cousin glanced around.  Covers had already been draped over most of the furniture.  With one night remaining at Darcy House, only the bedrooms, dining room, and drawing room were still fully available for the family’s use.

“I do not understand!” Richard sputtered.  Under other circumstances, Darcy might have found it amusing.

“I am closing up Darcy House,” Darcy patiently repeated what he had written in the note.  “It will run on a skeleton staff.  The remaining staff will travel to Pemberley.  After staying at Pemberley for a week, we shall close it up as well.  Then Georgiana and I will take a ship for America.”

Richard shoved his fingers through his already unruly brown hair.  “Just like that?”
“Indeed.”

“But why?”  Richard was watching Darcy’s face a little too intently for his comfort.

“My father’s brother, my Uncle Clive, has invited us to visit him in Philadelphia.”

If he only knew the true reason, he would happily purchase my passage himself.

Darcy shrugged.  “I have always desired to see it, and Georgiana never had many opportunities to travel, since she was so young when our parents died.”  Fitzwilliam was still frowning at Darcy, and he found himself staring down at his desk, rearranging the ink bottle and papers.  His cousin’s gaze weighed upon him.

He struggled to keep his face blank.  “It is also a good excuse for delaying Georgiana’s coming out.  The idea of a debut frightens her.  Time away from the concerns of the ton and the marriage market will be beneficial to her.”  Richard’s shoulders relaxed fractionally, and some of his frown lines smoothed out.  Darcy had hoped Georgiana’s debut was a reason his cousin would understand.

“But America is so far away!” Richard exclaimed.

And that is why it appeals.  “Indeed.  It was inconsiderate of them to put the country on another continent.  But we shall not be gone long.”

Richard regarded him suspiciously.  “How long is ‘not long?’”

-“We have no fixed departure date.  A couple months, maybe.  We will see how we like it and whether they have anything that resembles decent tea.”

“Months!” Richard cried. “You will miss the wedding.”

“I am afraid so,” Darcy murmured.

“Elizabeth will be disappointed.”

Darcy noticed his cousin carefully scrutinizing him.  Had he flinched at the mention of her name?  “You did change the wedding date,” Darcy observed.

Although Lydia and Wickham’s marriage had served to quell the worst of the scandal, rumors still circulated, and Richard’s parents had insisted that he and Elizabeth delay their wedding a few more months until the scandal abated.  Darcy thought his cousin a fool for acquiescing.  If Elizabeth agreed to marry him, Darcy would not rest until he had dragged her before an altar.

“You will Miss Bingley’s wedding as well!”

Darcy experienced a twinge of guilt.  “I penned a letter of apology to Bingley.”

Richard sank into a dustcloth-covered chair.  “This is ridiculous!  When did you become so impulsive?  It must be Bingley’s influence.”

Darcy laughed, although it sounded hollow to his ears.  “I have wished to visit America for some time.  My business affairs are stable.  The opportunity presented itself.”

“I have never heard you express a desire to visit America,” Richard observed.  Darcy merely shrugged.  “What about Georgiana?  Will she be safe in such a savage country?”

“It is not darkest Africa.”  Darcy grinned.  “I am fairly certain they have cooked food and draperies and banks – among other trappings of civilization.”  Richard merely folded his arms over his chest.  “I will write to you.  Mail is regular—every two weeks or so depending on the winds.  If any tricky estate issues arise, I am happy to advise you by letter.”

Richard snorted.  “Hang the estate!”  He stood and looked Darcy directly in the eye.  Did he suspect Darcy was hiding something?  God willing, he would never guess what.

Richard finally shook his head and walked restlessly to the window.  “I-I will miss you, William.”  Darcy was touched.  He knew that removing himself from England—and temptation—was the best course, but he would miss his cousin’s company.

“I will miss you as well.”  Darcy crossed the room to rest his hand on his cousin’s shoulder.  “But we will return before you have had a chance to notice we are gone.”

What if Mr. Darcy’s proposal was too late?

Darcy has been bewitched by Elizabeth Bennet since he met her in Hertfordshire.  He can no longer fight this overwhelming attraction and must admit he is hopelessly in love.

During Elizabeth’s visit to Kent she has been forced to endure the company of the difficult and disapproving Mr. Darcy, but she has enjoyed making the acquaintance of his affable cousin, Colonel Fitzwilliam.

Finally resolved, Darcy arrives at Hunsford Parsonage prepared to propose—only to discover that Elizabeth has just accepted a proposal from the Colonel, Darcy’s dearest friend in the world.

As he watches the couple prepare for a lifetime together, Darcy vows never to speak of what is in his heart.  Elizabeth has reason to dislike Darcy, but finds that he haunts her thoughts and stirs her emotions in strange ways.

Can Darcy and Elizabeth find their happily ever after?

By the author of The Secrets of Darcy and Elizabeth, an Amazon Regency Romance Bestseller.

Oh my, can my heart take this? You definitely have put a lump in my throat and a gasp in my breathing! I can tell this one will be a book that cannot be put down!

Thank you, Victoria Kincaid for visiting, for sharing your views of Jane Austen being a feminist and also for including such a heart-wrenching excerpt! I can hardly wait for more time to read! For all of you readers of my blog, Victoria is giving away one copy of her new release, Pride & Proposals. The giveaway is international AND the lucky winner gets to choose either an eBook or a Paperback! Isn't that fantastic! Again, I thank you, Ms. Kincaid for such a grand giveaway! In your comments, give us your opinion of Jane Austen and feminism. We would love to hear your share in the conversation. You may also comment on the prospect of Elizabeth and Colonel Fitzwilliam as a betrothed couple! The giveaway will end 29 June, 2015 at 11:59 PM. Please leave an email or other contact information should you be the randomly selected winner of Pride and Proposals! Good luck to all!
Posted by Janet T at 11:17 AM