Sophie Turner, A Constant Love and NO Cliffhangers!

Sophie Turner is a new author in the JAFF world and her first book, A Constant Love, is gaining much attention and success. It caught my eye when it was  first released so I am thrilled to have Ms. Turner as my guest today. Thank you for being with us AND for leaving us with NO Cliffhangers! Bless you, my dear! :)

Since I have the particular honor of following after Ross Poldark, and am in the midst of writing a series myself, I thought I would do a post on series writing.

I started on A Constant Love with no plans for a series, but as I wrote that story, I began to develop ideas for what would happen to the characters after its ending. Those ideas eventually became substantial enough for a second book, A Change of Legacies, which is wholly written and presently going through the editing wringer. As seems to be the pattern, while I was planning Legacies, which was originally the only sequel, more ideas formed in my mind, and I now have at least loose plots set for a total of seven books in the series. This delayed my publication of A Constant Love a bit, while I worked in some foreshadowing and aligned things as I needed them to meet the later plots.

When I published A Constant Love, I noticed quite a few readers were gun-shy of series, and particularly cliffhangers, which surprised me. Perhaps because I now know that it takes me at least a year to research, write, and edit one of these books, I would never end things on a cliffhanger that may well be forgotten by the time the next story is published. As it is, I’m considering including things like family trees and possibly even brief summaries of the prior books in the later novels, so that readers can get back up to speed without rereading what has come before.

But back to cliffhangers. To me, a great series leaves you incredibly desirous of reading the next book, not because you need to find out what happens after the cliffhanger, but because you are enjoying spending time with the characters in their world, and don’t want that to end. Winston Graham’s Poldark books are one excellent example of this – I’ve read and very much enjoyed all 12. My gold standard for series writing, though, is Patrick O’Brian’s 20-book “Aubrey-Maturin” masterpiece, beginning with Master and Commander.

For those who have not read it, a 20-book series might sound daunting, and indeed it did to me at first, but once I was in the thick of it, I enjoyed it so much that I found myself incredibly glad there were so many books in the series. I’ve since re-read the whole set five times. All of the things that I aspire to in series writing, O’Brian did – subtly reminding the reader of key plot points that had come before as a new book begins, and carrying overarching plotlines through multiple books, while providing each individual novel with a satisfying plot and ending. What he did best, though, was to continually develop his characters over the course of these 20 books. I’ve reread them so many times because opening one up on my Kindle feels a little like having a reunion with old friends.

It’s an achievement in characterization that I don’t think is likely to be equalled, and certainly not by myself, but it’s good to have role models, and O’Brian is mine when it comes to series writing. He, in turn, was influenced by Jane Austen, and part of my purpose in writing A Constant Love, and now the later books, was to bring a little of O’Brian’s naval world into Austen’s world, merging the influences of two of my favorite authors.

So what is in store for my series? One of my goals has always been to show the enduring love of Elizabeth and Darcy, but also to keep things fresh with new romances, so there will be quite a few of those for the minor characters. Naval characters will provide the opportunity for a few voyages, and meanwhile the land-based characters will be affected by very land-based things, from a bad harvest to difficult neighbors. As it did in A Constant Love, the history of this time will continue to have an influence. And of course, there is the very natural progression of life – births, illness (and yes, occasionally death), and the dynamic of both romantic and family relationships, the former evolving, and the latter changing as these families grow.

I’ve already begun writing the third story, and as I’m less than halfway through these seven books, sometimes finishing this seems a daunting prospect. I’m committed to seeing it through, though, and sometimes I wonder what I’ll do when it’s finally done, and it’s time to leave at least some of these characters behind. In this, as well, I think of O’Brian, who was working on a 21st book in his series before he died.

At the rate my series seems to be growing, it’s entirely possible a few more books will slip in before it’s all done, and I won’t have to say goodbye quite as soon as I’m expecting. I promise, though, regardless of how many books it finally does end up running – there will not be any cliffhangers!

Book One of the Constant Love Series

As Britain settles into a short-lived peace, the characters of Pride and Prejudice pick up very nearly where the novel left off, in a new series of stories focused on love and family:

Elizabeth Bennet finds the joy of her marriage and honeymoon are followed by the demands of becoming Mrs. Darcy, all while helping her shy new younger sister come out into society.


Georgiana Darcy must deal with more suitors than she expected, when she fears nothing more than once again being persuaded to think she is in love with the wrong man. 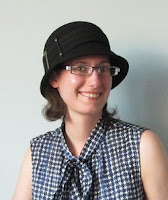 Sophie Turner worked as an online editor before delving even more fully into the tech world. Writing, researching the Regency era, and occasionally dreaming about living in Britain are her escapes from her day job.

She was afraid of long series until she ventured upon Patrick O'Brian's 20-book Aubrey-Maturin masterpiece, something she might have repeated five times through. Alas, the Constant Love series is only planned to be seven books right now.

Thank you again for being my guest today and sharing a bit with us about cliffhangers and the authors that have inspired you. It was fascinating reading and very apropos since you are following Ross Poldark which had a major cliffhanger. I am glad to know that yours do not have them as they are difficult to handle when there is much of a wait involved between books.

As I mentioned earlier, your book caught my eye soon after its release at the end of April. It sounded like a book that I wanted to read and is one that I plan to read as soon as possible. My TBR list is a little long at the moment, but then, that is an inconvenience in life that I must bear! To have so many books that I want to read sounds like a trial indeed, does it not, my friends? lol (I can remember searching desperately for a good JAFF book when I first discovered them.) To give all my readers a chance to read this book too, there is an international giveaway of one eBook of A Constant Love. To be entered, you must 'have your share in the conversation' by leaving a comment along with your contact info. The giveaway will end at 11:59 PM, 10 August, 2015. Thanks for stopping by and good luck to everyone.
Posted by Janet T at 10:47 AM