I have the pleasure to have Elizabeth Adams visiting my blog today. I have loved her past books, The Houseguest and Unwilling, and the wonderful news is that they are now available as audiobooks! That is great to hear! Ms. Adams also has a new release of short stories Meryton Vignettes. Isn't that good news too? We get the best of all of them, with her post today. She shares an excerpt with us from one of the short stories. You are going to enjoy it, I'm certain.  She pegged Caroline Bingley and her absurb obsession over Darcy. For the giveaway, Elizabeth Adams is offering a chance to win one of her audiobooks. I'm delighted at this opportunity for you, dear readers!

Excerpt from Life after Darcy, by Elizabeth Adams


And really, what did Louisa know about it anyway? She was married to that drunken lump of a man. She had never burned with passion, consumed with feelings she couldn’t understand. She had never watched the man of her dreams fall helplessly in love with a woman that wasn’t worthy of him, couldn’t be worthy of him. No, Louisa understood nothing and she refused to listen to her.

Charles was even worse. He attempted to reason with her, telling her that she and Mr. Darcy would never have gotten along anyway, that they were ill-matched, that she should count herself lucky and try to find a man more suited to the life she wanted to live. He didn’t understand. None of them did.

Only dear, sweet Jane comprehended how hurt she was, how wounded her pride, how bruised her vanity. That he had been so near to her on so many occasions, and yet looked her over, was a blow to her self-worth. That he could prefer someone so different from herself challenged everything she had long believed to be true.

Could they not see how her world was set on its head? What was she supposed to do, now that every dream was lain waste to, every cherished hope lost?

After the wedding, a black day she refused to acknowledge as special in any way, she decided something must be done. She was not the sort of woman to collapse at the whim of a man. She was stronger than that. She saw the sniggers on the faces of her supposed friends, the ones who had known of her single-minded pursuit of him and seen it in action. She would show them how a true lady comported herself. She would not cower in the corner like a jilted miss. She would stand tall and show them what she was made of. Show him.

Oh, she knew that even if he realized his mistake (as she was sure he would—in short order), there was no way she could ever have him. Of course, Eliza could die in childbirth but she doubted that outcome. Country girls were oddly strong in that respect. But even though she knew he would never be hers, she did admit to a certain satisfaction in thinking about how he would wish he had wed differently. Perhaps even that he had wed her.

Her favorite fantasy, of course, involved Mr. Darcy realizing before a year was out that he had made a terrible mistake. He would explain all to her when they were both visiting Charles. It would be late and he would have had one too many glasses of brandy. She would come across him alone in the drawing room after returning to fetch her shawl or in the library long after everyone else was abed. He would unburden himself to her and she would become his confidant, his dearest friend, the one he turned to for solace and relief.

After a time of close friendship, he would tell her his feelings could not be repressed. He must tell her how he loved her passionately and beg her to become his lover, even though he knew she was engaged to a marquis. She would refuse him, firmly but gently, and for the rest of their lives, their eyes would meet across crowded ballrooms and their hands touch clandestinely under tables at dinner parties. Eventually, Eliza would succumb to some disease contracted from her vile relations and die. Caroline would comfort him once again, and after her husband perished in a tragic riding accident, leaving her a wealthy and established socialite, they would become lovers and eventually marry, but only after he begged her for months and apologized for slighting her so dreadfully all those years ago.

Alas, she was not so unrealistic to believe any of this would actually happen, but it was a pleasant day dream nonetheless.

British actor Mark Topping has an increasing portfolio of audiobook titles to his name across a range of genres, from children’s stories and fantasy adventure to crime thrillers and romance.
His recent stage work in England includes playing Leonato in Shakespeare’s Much Ado About Nothing, and Bernard in Yes, Prime Minister. He is also currently the voice of Mission Commander at Laser Quest arenas throughout the UK and France. He has been performing as Rev John Wesley for more than 15 years and tours with a one-man Passion play, Impossible God.
He lives in the Forest of Dean with his wife and two daughters.

Brigid has always enjoyed reading classical literature. She loves Austen’s work, (and has even been to the Austen Museum in Bath!) and so jumped at the chance to narrate Elizabeth Adam’s The Houseguest as soon as she read it, as it was such a great story with colourful, quintessentially English characters which she loved bringing to life.
Brigid is a character actress and started narrating audiobooks three years ago. She began with the RNIB for whom she has narrated seven Australian titles from romances to psychological thrillers. For Spoken4 (available on Audible), she has narrated Kelly Rimmer’s When I Lost You and is also currently narrating Kelly’s latest book, A Mother’s Promise, which will be out in December 2016.

As well as audiobooks, Brigid has voiced commercials and corporate jobs for both the UK and Australian markets, as well as bringing characters to life in Radio Dramas such as the English rose Emma Finney in Dark Shadows: Beneath the Veil, and Dream Commando Wahn in Dr Who: Dreamtime with Sylvester McCoy for Big Finish Productions. 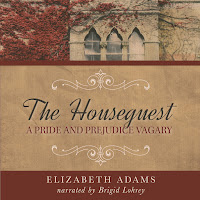 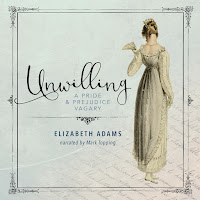 and to listen to the audiobooks as I am.

a Rafflecopter giveaway
Posted by Janet T at 12:32 AM