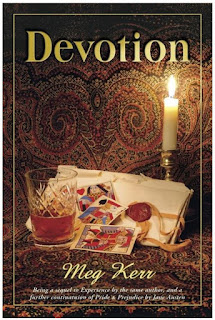 Good morning, Dear Readers. Today, I'm happy to highlight author, Meg Kerr, and her latest release, Devotion. I have written my review for Devotion and will share it with you later in this post. As most of you know, I'm a cover junkie, being that I love designing covers, so indulge me a minute, if you will. I'm not sure you can see the writing on the lower front cover but it says, 'being a sequel to Experience by the same author and a further continuation of Pride & Prejudice by Jane Austen. Isn't that neat? I like this description of what's inside and it sets the tone for the writing style of this author.

Before I post my review, I would like to give you a bit more info about the book and share an excerpt. First, pay close attention to this next paragraph! You are going to LOVE it!

As part of the 200th Anniversary of Jane Austen's passing on July 18, author Meg Kerr will offer her new novel Devotion as an exclusive free digital download to celebrate the life and legacy of one of the most prolific writers of all time. This FREE giveaway starts today, July 15th and will run to July 19th. (it actually ends July 18th) Following the free offer, Devotion will be available for purchase in digital format only, with the paperback edition to be released on August 18, 2017.

"Devotion is Prism Publishers’ contribution to the growing litany of fiction honouring the life and legacy of one of history’s greatest romantic novelists," says Prism’s publisher, Michael Braund.

Kerr, writing effortlessly and wittily in the style of Jane Austen, sweeps the reader back to the year 1816 for a reunion with many of literature's most beloved characters.

“I delight in interesting conversation, so writing dialogue is pure pleasure to me,” says Kerr when asked about the effort it took to write in Austen’s distinct prose. “My ideas come first and foremost from Jane Austen herself. I am always asking, ‘What would Jane do?’ In Devotion I played with a theme that was dear to her heart: the bad boy, and whether it is possible for him to be redeemed.”

For more information on this title, please visit http://www.prismpublishers.com.

That is quite an offer and one that I'm sure will be much appreciated by all. Thank you, Meg Kerr and Prism Publishers.

In this sequel to Jane Austen’s Pride and Prejudice, Georgiana Darcy, now twenty years old and completely lovely, is ripe for marriage. Her brother has carefully selected her future husband, but the arrival of a long-delayed letter, and a secret journey, bring Georgiana into the arms of an utterly wicked and charming young man whose attentions promise her ruin. At the same time, events in Meryton are creating much-needed occupation for Mrs. Bennet and a quandary for Lydia Bennet’s girlhood companion Pen Harrington; and the former Caroline Bingley is given — perhaps — an opportunity to remake some of her disastrous choices. Meg Kerr, writing effortlessly and wittily in the style of Jane Austen, sweeps the reader back to the year 1816 for a reunion with many beloved characters from Pride and Prejudice and an introduction to some intriguing characters.

That Mr. and Mrs. Fitzwilliam Darcy of Pemberley lived happily ever after is universally acknowledged as truth. Mr. Darcy through all the vicissitudes of matrimony assuredly continued to experience a happiness such as he had never felt before, and Mrs. Darcy remained the happiest creature in the world. Nor can there be any doubt that Mr. and Mrs. Charles Bingley remained blessed in a marriage of easy tempers and affectionate hearts.

But as they were driven away from the church door in Meryton, the quartet of joyful newlyweds left behind several young ladies with stories in a very incomplete state. Their creatrix, Miss Jane Austen, vouchsafed only that…

Mary Bennet remained at home and was obliged to mix more with the world as a result of her mother’s inability to sit alone.

Kitty Bennet to her material advantage spent the chief of her time with her two elder sisters, to her great improvement.

Lydia Wickham retained all the claims to reputation that her marriage had given her, as Wickham’s affection for her sank into indifference and hers soon followed.

Caroline Bingley was deeply mortified by Darcy’s marriage but took every necessary step to retain the right of visiting at Pemberley.

Georgiana Darcy now made Pemberley her home, with her brother and his wife.

No, no, this will not do. It is not to be tolerated that after living so intimately with the Bennets, Bingleys and de Bourghs, the reader of Pride and Prejudice should be denied any further news of their lives! And thus, Experience—to which this book, Devotion, is a companion volume. Pride and Prejudice took place over the course of the year 1812. Experience picks up the story immediately and its events unfold from the beginning of 1813 to the end of 1815. Over the course of Experience:

Mary, believing she has found her best and highest duty by uniting herself to a clergyman older than her father, a prolific writer who must surely be in need of her multitude of accomplishments to finish his tome on The Martyrs of the Reign of Queen Mary, is very much taken aback by her new husband’s insistence that the proper role of a clergyman’s wife is to visit the poor with a basket of potatoes and teach needlework to the daughters of the local labourers. Is there any escape for her from this nightmare?

Kitty through a perfectly natural and credible series of coincidences, contrivances, accidents and twists of fate ascends to the peerage

Lydia, a soldier’s wife, cannot avoid being swept up in the events of 1815 that culminate in the Battle of Waterloo and change her life forever.

Caroline Bingley’s humiliating romantic defeat at the hands of Elizabeth Bennet may be assuaged by a marriage into the aristocracy arranged by her sister Mrs. Hurst…but Miss Bingley, with her partiality for arrogant, tall, dark, handsome men finds what passes for her heart pulled in different directions.

As for Georgiana Darcy—Georgiana’s story is told in Devotion rather than in Experience, as she clearly needed a larger stage, all to herself, for her escapades.

Devotion is the second sequel of Pride & Prejudice written by Meg Kerr. I have not read Experience, which is the first sequel but it did not affect my enjoyment of the second book nor hinder my understanding and following of it. I do plan to go back now and read Experience as I was fascinated with Ms. Kerr’s writing. She writes much in the style of Jane Austen and I found that delightful.

Devotion is a story about Georgiana. She is more independent now and makes some decisions that are a bit risky. These choices certainly do not make the rest of her family too happy. When she disappears for a time, Darcy and Lizzy are at a loss as to where to find her. The part that Kitty and Colonel Fitzwilliam played in figuring out her location was excellent. I truly enjoyed their pairing. We spend much time with Georgiana on her journey, her arrival and her emotional growth during her absence. She is a bit determined but she is a Darcy after all.

There are some of the same characters as in the original but there are also some new ones introduced. Pen Harrington, one of the originals who got only a small amount of page time in Pride & Prejudice, is much more involved in this novel. I enjoyed getting a chance to know her better. The role that the Gardiners played was significant. They were the fair and good couple that I love. They saw reason and acted upon their good judgment. These actions were a definite influence in the outcome of Georgiana’s life. Mrs. Younge has a fairly big role and her personality remains mostly unchanged. She’s still up to her old tricks. Caroline Bingley is in the story with a new name and a new position. I liked the life that Ms. Kerr gave Caroline. I also found the name of an old flame and love interest of Caroline’s quite interesting. The man’s home and occupation are too similar to the hero of a later time and different author to be coincidence. I will be eager to learn if there will be more to this story.

John Maury is a new character that is both bad and good. He is utterly charming and I couldn’t help but like him. He plays a leading role in the story and his development as a person was exciting to watch. I enjoyed and was also fascinated by the interplay between him and some of the characters from his life. Those enhanced the story and eventually came around to add their own significance and cohesiveness to the conclusion.

There were times in the beginning of the novel that I felt the switch of scenes and people from one chapter to another was a little disjointed but not enough to make me lose interest. My main feeling was if I had missed something earlier. (This also could have been a result of me not having read the first book.) As I continued reading and the plot played out, I saw the importance of those introductions and changes. They were necessary to the summation of the story and all the pieces began to fit together nicely.

Overall, I felt the characters were true to the originals. Darcy is still protective of Georgiana and Lizzy is the sister that she needed. Georgiana is growing into the young woman that I would think she would with Lizzy for her sister and example. I enjoyed Meg Kerr’s ability to spin a tale and make it believable. The novel is intriguing and held my interest from the beginning. Her love of Jane Austen’s writing is evident in her own. I took much pleasure in Ms. Kerr’s style of writing. I look forward to reading more from this author. If you get a chance to read Devotion, I highly recommend it.

What do you do when you live in the twenty-first century but a piece of your heart lies in the nineteenth? If you are author Meg Kerr you let your head and hand follow your heart. With her love of country life—dogs and horses, long walks in the woods and fields, dining with family and neighbours and dancing with friends, reading and writing and the best conversation—and her familiarity with eighteenth and nineteenth century history and literature, Meg has a natural gift to inhabit, explore and reimagine the world that Jane Austen both dwelt in and created, and to draw readers there with her.

Meg Kerr may be contacted via her publisher, Prism Publishers. Please contact Michael Braund at prismpublish@gmail.com to inquire about interviews, appearances, signings, and other events.

I hope you have enjoyed reading about Meg Kerr, her novel, Devotion and my review of it. Please let us know what you think. Since the Ms. Kerr is giving away her novel today to July 19th, you do not have to comment to win. You win by following the link here to get the  Free eBook.

I will leave you with this video of Meg Kerr as she discusses Austen's 'bad boys'. Enjoy! Thank you for stopping by today and please tell your friends about this wonderful giveaway but remember, the eBook is only free for a limited time. Get your copy now! :)
Posted by Janet T at 12:15 AM