The Making of A Most Handsome Gentleman Cover

This post first appeared on the Meryton Press website on October 10th. Since the blog tour for Suzan Lauder's book, A Most Handsome Gentleman, begins tomorrow, October 20th, Suzan and I decided it would be nice to repeat the post here at More Agreeably Engaged. Enjoy!


The Making of A Most Handsome Gentleman Cover

AKA Who's Who of Handsome Gents by Janet Taylor

Rita Deodato of From Pemberley to Milton hosted Suzan Lauder's Cover Reveal for A Most Handsome Gentleman. During that reveal there was much discussion over which gentleman was Collins and which one was Darcy.

The two being favored for this discussion were the main gentleman, the one in the center and the gentleman to his immediate left. Suzan and I laughed and had the best time reading those comments. We talked about divulging the identity of them and when would be the best time to do it. Suzan even left a few hints in her responses to some of the comments. When Zorylee asked me to do a post for Meryton Press for the making of the cover of A Most Handsome Gentleman, Suzan thought that would be the perfect time to reveal which man is which and to give the identity of one of them, in particular! As Mr. Bennet would say, "Read on."

When Suzan Lauder and I started discussing the cover for her lighthearted story, A Most Handsome Gentleman, she had some great suggestions and ideas. Having read her manuscript, those ideas were spot on with some of my own thoughts, so the collaboration began! 😊

During the writing of this book, Suzan had posted it at A Happy Assembly. She had reader participation in picking the gentlemen for #HOT Collins, as the book was then called! A Pinterest Page had been set up for these gentlemen and I was given the ‘difficult’ task of rummaging through those handsome Regency men. Such are the trials of designing covers.

Many hours were spent looking for men that would fit each gentleman gracing the front cover. I needed them to have shadows on their faces from the same direction or be such that I could make those shadows fall the same. I searched Suzan’s Pinterest pages, my own pages, and anywhere I could find paintings of Regency men. I found the perfect Bingley. The only problem was the shadow on his face. It was on the wrong side. I tried several other guys but kept coming back to Robert Waller, Esq. He looked like Bingley. He was Bingley. My only choice was to create the shadow on the correct side and take it off the wrong side. I WANTED that man for Bingley! Thankfully, Suzan agreed!

Even though there was one gentleman, William Whewell, who had been picked as a good Collins, Suzan had a different thought…my grandson, Chayseland Taylor. If he wouldn’t work for Collins, she wanted him for Darcy. (He is on the front cover of Jan Hahn’s The Secret Betrothal, and Suzan was familiar with the story behind that cover.) Since Collins had striking blue eyes, I knew it was going to be tough using Chayseland for Collins. Chayseland’s eyes are a dark brown and appear almost black, thus the decision to make him Darcy. William Whewell had light eyes so it was easy to make them bluer without them looking weird. William Whewell made a perfect Collins for other reasons too. He was handsome, had curly hair, and was a Reverend. The main difference between him and Collins, Whewell was an exceptionally intelligent man. He even had some inventions to his credit. No foolish talk spewing from his mouth!

The man that had been designated as Wickham became a problem. The painting was copyrighted and
I couldn’t find one of him that wasn’t. The hunt for a new Wickham ensued. Every time I found one that might work, I ran into the same licensing problem. The man that had been a possible Darcy candidate became the head of the new Wickham. Finding a military painting, turned the same way, with the same shadowing, that could be used for the body became the next issue. As it turned out, the one on the cover, Sir Henry Brougham, made a better Wickham anyway.

Chayseland has dark brown, wavy hair and I felt I could make it look like the hair of Mr. Darcy from the 1995 miniseries…yes, Colin Firth. 😊 My intentions were to take a picture of my grandson and put his head on the body of a Regency gentleman! On the day of the ‘photo shoot’ I had planned—but had failed to enlighten Chayseland of those plans—he got his hair cut! Not just cut, he got it cut short! I shrieked! “You cut your hair!” He looked at me like I was stating the obvious and said, “Yes!” “I was going to take your ‘Darcy’ pictures today,” said I. “Well, I didn’t know that,” said he. Thus, much to my despair, the search began for a painting I could use, one that would allow me to replace the gent’s face with Chayseland’s, not his face AND hair as originally planned. (What is that saying about best laid plans?) You should see some of those efforts. Well, on second thought, you shouldn’t. UGH! Chayseland would shake his head and we would both get a good laugh. After much trial and error, mostly error, I decided to look among my plethora of pictures, shot from my movie stills of Darcy in the 1995 miniseries. (another trying and tedious task…lol) Taking many pics of Chaysleland, with short hair, over several days, I had some I could use. I just needed to match his stance and direction with one I had of Mr. Darcy. Success! I found one, put them together, made a painting, and Darcy was done, much to the satisfaction of all! Suzan was pleased, I was relieved, and all was well in the world of handsome gentlemen. 😍

Moving on to the back cover, Suzan wanted a picture of a couple leaning on a tree in a passionate embrace. Several paintings were found but something was off with each so I turned to my son, Jeff, for help. He does 3-D renders, or computer-generated images. I told him what we wanted and how we needed it to look. He went to work. His final image was perfect. The female even had messy hair from ‘making out’ in the woods behind the tree.

A photograph from Luckington Court, one I took while visiting England in 2012 with Jan Hahn, was used for the background. (Longbourn in the 1995 miniseries)  This chosen photo had the appearance of the scene in Suzan’s story. It went easily behind the graphic image of Collins and his lady. The back cover image was complete and ready for text. 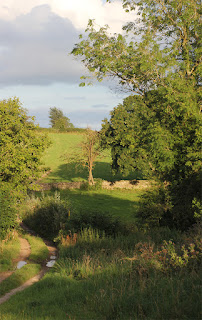 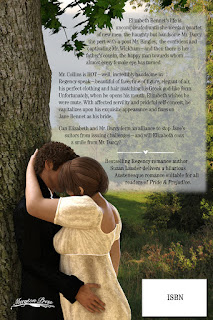 One fun ‘aside’, a picture from the Keukenhof Gardens in the Netherlands appeared in my Pinterest suggestions. I went to the sight to view more lovely photos and, voila, look what I saw!  Immediately, I sent the picture to Suzan! Although this couple is more daring in their dress, or lack thereof, than Collins and his 'lady love', the pose is PERFECT!

A Most Handsome Gentleman by Suzan Lauder is a comical and witty book. I hope everyone has as much fun reading it as I had depicting it. 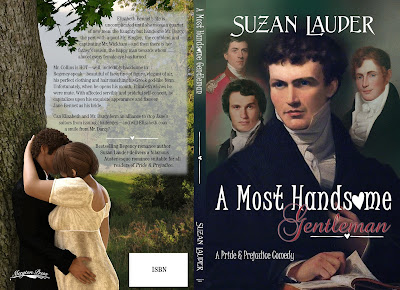 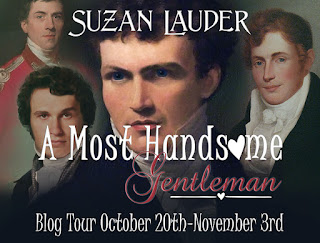 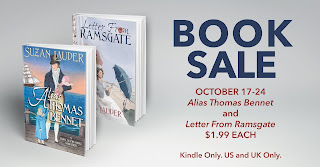 Meryton Press is celebrating the October 20th release of Suzan Lauder’s new comedy, A Most Handsome Gentleman, i.e., #HOT Collins, with a sale of Suzan’s first two books, Alias Thomas Bennet and Letter from Ramsgate. Sound like fun? We hope everyone will think so. Please spread the word! Dates of the sale are October 17-24 for both books.

Your share in the conversation is always welcome!
Posted by Janet T at 12:06 AM