A Short Period of Exquisite Felicity, my share in the conversation... 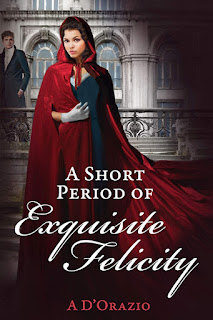 It is my pleasure to be the first stop of the blog tour for A D'Orazio's new book, A Short Period of Exquisite Felicity. I'm so excited to take part in Amy's blog tour and especially to open it with my review of her book. I loved her first book and was anxious to read this new one. But before I get to my review of it, let's learn a little more about the author and the book. Isn't the cover lovely! The red roses on the back (you will see those further down in the post) and red cape are breath-taking!

Is not the very meaning of love that it surpasses every objection against it?

Jilted. Never did Mr. Darcy imagine it could happen to him.

But it has, and by Elizabeth Bennet, the woman who first hated and rejected him but then came to love him—he believed—and agree to be his wife. Alas, it is a short-lived, ill-fated romance that ends nearly as soon as it has begun. No reason is given.

More than a year since he last saw her—a year of anger, confusion, and despair—he receives an invitation from the Bingleys to a house party at Netherfield. Darcy is first tempted to refuse, but with the understanding that Elizabeth will not attend, he decides to accept.

When a letter arrives, confirming Elizabeth’s intention to join them, Darcy resolves to meet her with indifference. He is determined that he will not demand answers to the questions that plague him. Elizabeth is also resolved to remain silent and hold fast to the secret behind her refusal. Once they are together, however, it proves difficult to deny the intense passion that still exists. Fury, grief, and profound love prove to be a combustible mixture. But will the secrets between them be their undoing?

Amy D’Orazio is a former breast cancer researcher and current stay at home mom who is addicted to Austen and Starbucks in about equal measures. While she adores Mr. Darcy, she is married to Mr. Bingley and their Pemberley is in Pittsburgh PA.
She has two daughters who are devoted to sports which require long practices and began writing her own stories as a way to pass the time she spent sitting in the lobbies of various gyms and studios. She is a firm believer that all stories should have long looks, stolen kisses and happily ever afters. Like her favorite heroine, she dearly loves a laugh and considers herself an excellent walker. 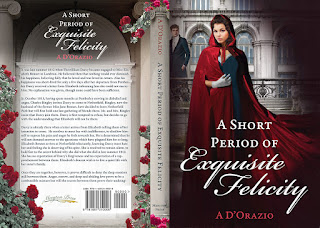 Now it's time to share my thoughts on A Short Period of Exquisite Felicity by A D’Orazio.
A Short Period of Exquisite Felicity, the newest release by A D’Orazio, begins at Netherfield. In the hopes of helping their friends find the same happiness they share, Charles and Jane Bingley, now married, with a son, are hosting a house party. They have invited an equal number of single men and women, including Fitzwilliam Darcy. Darcy, hesitant to attend for fear of seeing Elizabeth Bennet, decides to accept, believing Elizabeth will not be in attendance.

Elizabeth Bennet, living in Cheltenham for the past year, has agreed to make her home with the Bingleys. A changed woman, Lizzy is not the impertinent woman of the past. Her arrival during the house party sets the stage for the events and trials that follow.

Go back a little over a year when Lizzy visits Pemberley with the Gardiners. The misunderstanding that came from the Hunsford proposal has been resolved. Lizzy accepts Darcy’s second proposal and for a short period, they experience exquisite felicity, thus the title. The title is referred to several times throughout the book and those references are apropos.

Lydia’s unfortunate adventure/misadventure with Wickham proves too much and Lizzy calls off the engagement with no explanation. Not only does she call if off, she does so in a letter. Darcy has been jilted and he cannot imagine why. Heartbroken he refuses to attend Bingley’s wedding nor does he visit until the house party. There is much more to Lizzy’s departure than the reader will know until nearer the ending. Lizzy and Darcy struggle while trying to come to terms with what happened, what could have been, what each does not know, and their inability to quit loving each other. Throw into this mix, eligible men and women and some sparks will fly. Oh my, let the fun begin!

Lizzy’s reason for living in Cheltenham is questioned. Rumors fly and one source of those rumors caught me totally offguard. Even Darcy begins to believe some of the rumors. Will they make a difference in those feelings he still has for her or will they put an end to those feelings forever?

This novel grabbed my attention from the beginning. I felt invested in the characters and the story, enough so that I got a bit frustrated at times. I wanted to shake Darcy and Lizzy and tell them to please sit down and talk to each other. When they finally did try, they kept getting interference from first one and then the other. The angst was not only caused by Darcy’s and Lizzy’s misunderstanding but also by the so-called ‘help’ of friends and family. Anytime there is angst, the romance, when it happens, will be all the sweeter. That certainly is the case in this novel.

A D’Orazio is an excellent storyteller, and her novel is well-written. It kept this reader up late into the night. It had some twists and turns that I never saw coming. Amy’s first book, The Best Part of Love, was exceptional and I eagerly awaited the publication of her second. It did not disappoint. Thank you, Amy, for such an entertaining read. 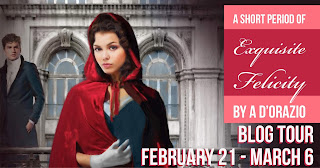 Readers may enter the drawing by tweeting once each day and by commenting daily on a blog post or review that has a giveaway attached to this tour. Entrants must provide the name of the blog where they commented.

Thanks to all of you for stopping by. If you have read either or both of Amy's books, will you share your thoughts? I would love to hear them. If you haven't read this new release, be sure and visit all the stops in the tour for a chance to win it. You won't be disappointed. Thank you to Amy for giving us such a lovely book, to Meryton Press for hosting the giveaway and to Claudine Pepe for organizing the blog tour. Best wishes for your book, Amy, and have fun during your blog tour.
Posted by Janet T at 1:09 AM